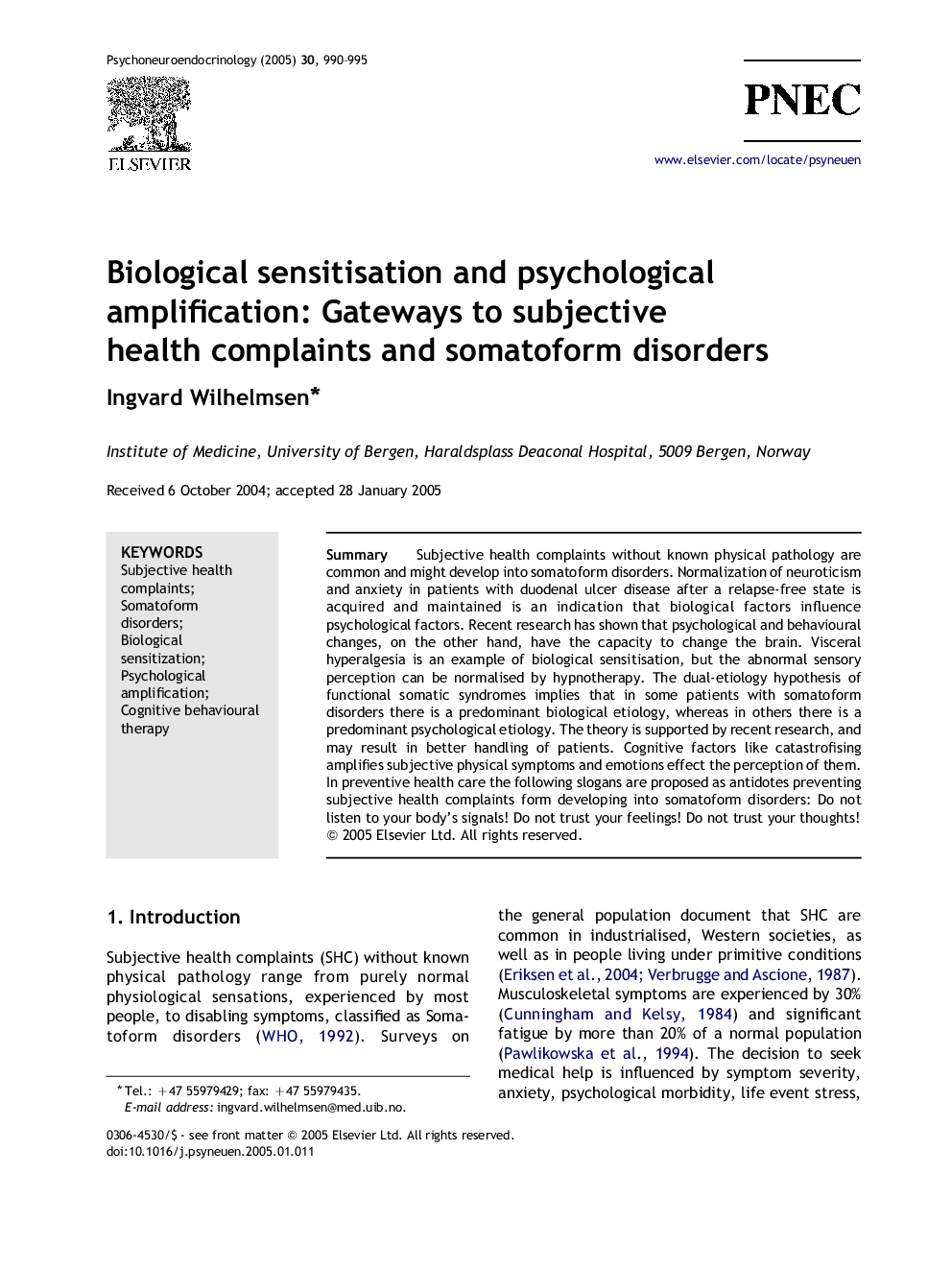 Subjective health complaints without known physical pathology are common and might develop into somatoform disorders. Normalization of neuroticism and anxiety in patients with duodenal ulcer disease after a relapse-free state is acquired and maintained is an indication that biological factors influence psychological factors. Recent research has shown that psychological and behavioural changes, on the other hand, have the capacity to change the brain. Visceral hyperalgesia is an example of biological sensitisation, but the abnormal sensory perception can be normalised by hypnotherapy. The dual-etiology hypothesis of functional somatic syndromes implies that in some patients with somatoform disorders there is a predominant biological etiology, whereas in others there is a predominant psychological etiology. The theory is supported by recent research, and may result in better handling of patients. Cognitive factors like catastrofising amplifies subjective physical symptoms and emotions effect the perception of them. In preventive health care the following slogans are proposed as antidotes preventing subjective health complaints form developing into somatoform disorders: Do not listen to your body's signals! Do not trust your feelings! Do not trust your thoughts!

Subjective health complaints (SHC) without known physical pathology range from purely normal physiological sensations, experienced by most people, to disabling symptoms, classified as Somatoform disorders (WHO, 1992). Surveys on the general population document that SHC are common in industrialised, Western societies, as well as in people living under primitive conditions (Eriksen et al., 2004 and Verbrugge and Ascione, 1987). Musculoskeletal symptoms are experienced by 30% (Cunningham and Kelsy, 1984) and significant fatigue by more than 20% of a normal population (Pawlikowska et al., 1994). The decision to seek medical help is influenced by symptom severity, anxiety, psychological morbidity, life event stress, personality, abuse and abnormal illness attitudes and beliefs (Shapiro and Olden, 2000 and Koloski et al., 2001). The etiopathogenesis of SHC is complex, and the role played by genetics, biological sensitization and psychosocial factors probably differs between individuals and within groups of people given a diagnosis because of symptom clusters. Sensitization, defined as a central nervous process in which neuronal sensitization may be the neurobiological substrate, has been proposed as the biological substrate for intolerable SHC, constituting somatoform disorders (Eriksen and Ursin, 2002). The term includes biological sensitization, for example visceral hyperalgesia, and psychological sensitization, when hypervigilance to a specific SHC leads to amplification of the symptom, as in hypochondriasis. The aim of this article is to review some recent publications that give new insights into the interaction between biological and psychological factors in SHC and somatoform disorders, with special emphasis on functional gastrointestinal syndromes (FGS). The discussion focuses on the consequences these findings could have on the communication between the medical community and the public.