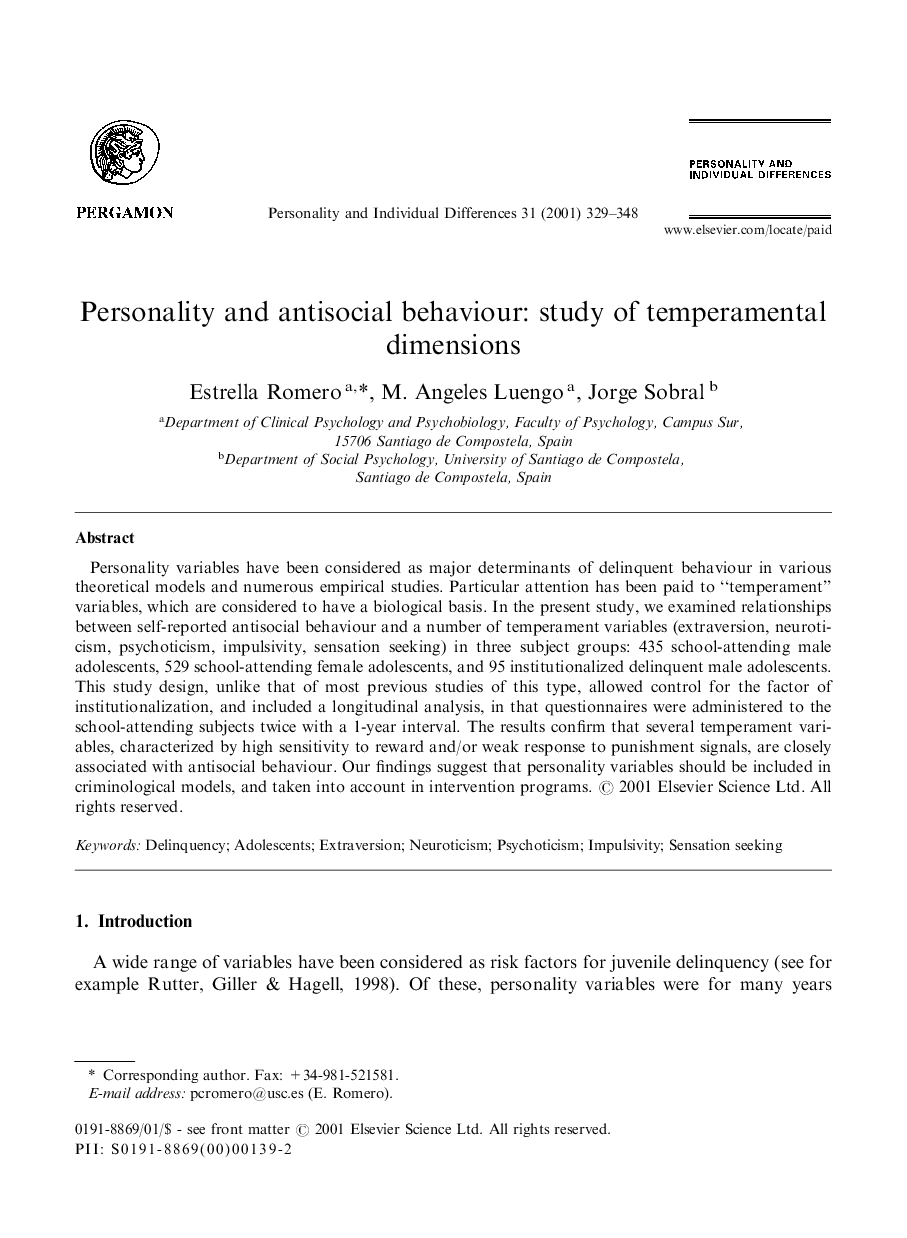 Abstract Personality variables have been considered as major determinants of delinquent behaviour in various theoretical models and numerous empirical studies. Particular attention has been paid to “temperament” variables, which are considered to have a biological basis. In the present study, we examined relationships between self-reported antisocial behaviour and a number of temperament variables (extraversion, neuroticism, psychoticism, impulsivity, sensation seeking) in three subject groups: 435 school-attending male adolescents, 529 school-attending female adolescents, and 95 institutionalized delinquent male adolescents. This study design, unlike that of most previous studies of this type, allowed control for the factor of institutionalization, and included a longitudinal analysis, in that questionnaires were administered to the school-attending subjects twice with a 1-year interval. The results confirm that several temperament variables, characterized by high sensitivity to reward and/or weak response to punishment signals, are closely associated with antisocial behaviour. Our findings suggest that personality variables should be included in criminological models, and taken into account in intervention programs.

. Introduction A wide range of variables have been considered as risk factors for juvenile delinquency (see for example Rutter, Giller & Hagell, 1998). Of these, personality variables were for many years attributed scant importance (Farrington, 1992 and Romero et al., 1999): the powerful influence of sociology on criminological theory, a certain fear of biological reductionism, and the internal crises of personality psychology itself came together to create a climate in which personality factors were dismissed as unimportant (Stitt & Giacopassi, 1992). More recently, however, there has been what might be called a ‘rediscovery of the person’ in criminology (Andrews & Bonta, 1994). In the face of strong evidence that macrosocial variables cannot fully explain delinquency, and that there is great interindividual variability in the behaviour of subjects exposed to criminogenic conditions, increasing interest is turning to individual differences, even in schools of thought with a strong sociological influence (Gottfredson & Hirschi, 1990). Particular attention is being paid to what have been referred to as the ‘temperament’ variables, a group of characteristics assumed to depend on the individual's biological substrate, and showing a relatively high degree of stability over the lifespan (Bates and Wachs, 1994 and Strelau, 1998). In criminal psychology, Eysenck's three fundamental dimensions (extraversion, neuroticism, psychoticism), together with impulsivity and sensation seeking, have received particular attention.1 It has been hypothesized that delinquency is related to all three Eysenck dimensions. Extraversion, associated with a low level of corticoreticular arousal, hinders conditioning and thus the acquisition of social norms. As neuroticism tends to amplify acquired behavioural tendencies, Eysenck (1964) predicts that subjects with high extraversion and neuroticism scores are those at highest risk for antisocial behaviour. In 1976, the dimension psychoticism was introduced into Eysenck's system (Eysenck & Eysenck, 1976), and since that time has likewise been considered to be a predictor of criminal behaviour, in view of the hostility and emotional insensitivity characteristic of subjects with high scores on this dimension. Impulsivity has also been the subject of increasing attention as an explicator of antisocial behaviour, despite the conceptual and methodological confusion surrounding this construct (Gerbing et al., 1987, White et al., 1994 and Romero et al., 1994). The classical conceptions of psychopathic personality (Cleckley, 1976, Gough, 1948 and Hare, 1980) include as defining characteristics a lack of behavioural self-control, an orientation toward immediate gratification, and difficulty in carrying through long-term plans, all of which are implicit in the impulsivity construct. Approaches derived from Gray's model (for example, Newman, 1987) have suggested that reward sensitivity and difficulty in processing punishment signals make impulsive subjects prone to antisocial behaviour. The theoretical approach adopted by Wilson and Herrnstein (1985) proposes that impulsive subjects have a short time horizon, and are thus not adequately dissuaded by the typically delayed negative consequences of delinquent acts. Finally, in more recent models (e.g. Gottfredson and Hirschi, 1990 and Hirschi and Gottfredson, 1994), low self-control is considered to be a key factor underlying many types of deviant conduct, in association with situational opportunity. Sensation seeking likewise has been considered a correlate of antisocial behaviour (Zuckerman, 1979 and Zuckerman, 1994a). It is widely considered that a desire for stimulating, intense, and novel experiences is an essential component of delinquent conduct (Farley and Farley, 1972, Haapasalo, 1990 and Zuckerman, 1978). Many researchers have examined the relationship between these personality dimensions and antisocial behaviour (see for example Berman and Paisley, 1984, Daderman, 1999 and Mak, 1991). Despite the vigour of these lines of research, however, most previous studies have suffered two limitations. The first frequent limitation is one of design, in that many studies have been based on comparison between institutionalized delinquents and individuals in the general population, on the implicit assumption that all non-institutionalized subjects are non-delinquent. As pointed out by other authors (Farrington, 1987 and Krueger et al., 1994), such ‘known-groups’ designs have a number of clear drawbacks. First, only a small proportion of subjects who commit crimes are subsequently institutionalized, so that known-groups designs cannot guarantee that the putative controls are non-delinquent subjects. In fact, the two groups probably overlap along a behavioural continuum, so that the delinquency/non-delinquency dichotomy is of little value (Eysenck & Gundjonsson, 1989). Second, institutionalization is in itself an important variable affecting the relationships between personality and delinquency. Certain personality traits may favour official processing and institutionalization (Feldman, 1977), giving rise to ‘differential apprehension’: for example, impulsive and emotionally unstable individuals may be less capable of escaping detention by the police. Similarly, it should not be forgotten that internment may itself influence personality variables, as suggested by various authors (Banister et al., 1973, Landau, 1976 and Zamble and Porporino, 1988). As a result, it may be difficult to determine whether a given trait is associated with delinquent behaviour or simply with institutionalization. The second frequent limitation of studies of this type is that they are cross-sectional in approach. Despite the clear need for a longitudinal approach in studies of delinquent behaviour (Farrington, 1997, Heaven, 1993 and Loeber, 1990), most studies have evaluated personality/delinquency relationships as existing at a given moment in time.2 However, the identification of risk factors implies a need for prospective studies, allowing control of the temporal order of variables, and thus assessment of the extent to which personality variables can be considered genuine predictors of antisocial behaviour. In the present study we investigated the relationship between temperament variables and delinquency, using a design that attempted to overcome these limitations. First, delinquency was considered as a behavioural continuum rather than an all-or-nothing variable: subjects were asked to supply self-reports of antisocial behaviour, allowing direct evaluation of personality–delinquency relationships. In order to cover a wide range of levels of antisocial behaviour, we studied both school-attending adolescents and institutionalized delinquents. In addition, the inclusion of officially recognized delinquents allowed us to perform specific analyses of the effects of the factor institutionalization.