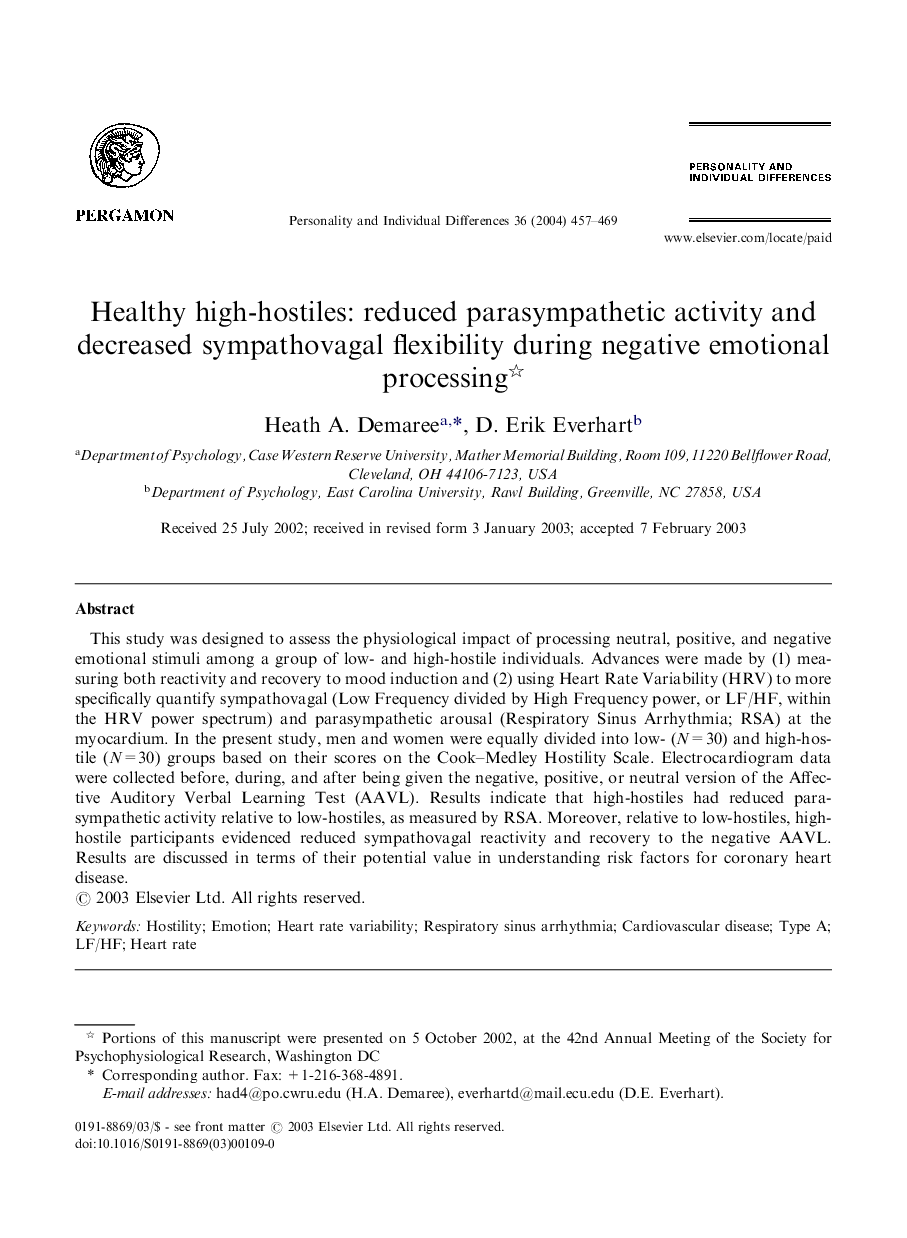 This study was designed to assess the physiological impact of processing neutral, positive, and negative emotional stimuli among a group of low- and high-hostile individuals. Advances were made by (1) measuring both reactivity and recovery to mood induction and (2) using Heart Rate Variability (HRV) to more specifically quantify sympathovagal (Low Frequency divided by High Frequency power, or LF/HF, within the HRV power spectrum) and parasympathetic arousal (Respiratory Sinus Arrhythmia; RSA) at the myocardium. In the present study, men and women were equally divided into low- (N=30) and high-hostile (N=30) groups based on their scores on the Cook–Medley Hostility Scale. Electrocardiogram data were collected before, during, and after being given the negative, positive, or neutral version of the Affective Auditory Verbal Learning Test (AAVL). Results indicate that high-hostiles had reduced parasympathetic activity relative to low-hostiles, as measured by RSA. Moreover, relative to low-hostiles, high-hostile participants evidenced reduced sympathovagal reactivity and recovery to the negative AAVL. Results are discussed in terms of their potential value in understanding risk factors for coronary heart disease.

Cardiovascular disease accounts for about 40% of the mortality in the United States as well as in most other industrialized nations (American Heart Association, 2001). The physical, financial, and emotional burdens of this disease on patients, their families and friends are enormous. In fact, the economic cost in the United States alone—which includes payment for medications and medical services, as well as lost income due to death/disability—has been estimated at over $298 billion per year (American Heart Association, 2001). Improving our understanding of the disease's etiology, including how those predisposed to cardiovascular disease differentially react to stress and emotion, may assist in the prevention and treatment of this malady (American Heart Association, 2001). An abundance of evidence suggests that hostility is positively associated with the risk for coronary heart disease (CHD) and coronary artery disease (CAD) (Brummett & Williams, 1998, Dembroski et al., 1989, Littman, 1993, McDermott et al., 2001, Miller et al., 1996 and Siegman et al., 2000). Most recently, McDermott and colleagues (2001) evaluated 97 men with CAD, 28 men with valvular heart disorder without CAD, and 28 men who experienced a bone fracture and were without any heart impairment. Using the latter two groups as controls, these researchers determined that anger expression was a significant predictor of CAD. Dembroski et al. (1989), analyzing data from the prospective Multiple Risk Factor Intervention Trial, found that both Potential for Hostility and an antagonistic interaction style significantly predicted CHD prevalence. Meta-analyses, too, have supported the literature implicating hostility's role in heart disease. For example, Miller et al. (1996) found that hostility was an independent risk factor for CHD and that the Cook–Medley Hostility Scale (CMHO; Cook & Medley, 1954) was an excellent predictor of “all-cause mortality” (weighted r=0.12) and CHD mortality (weighted r=0.08).