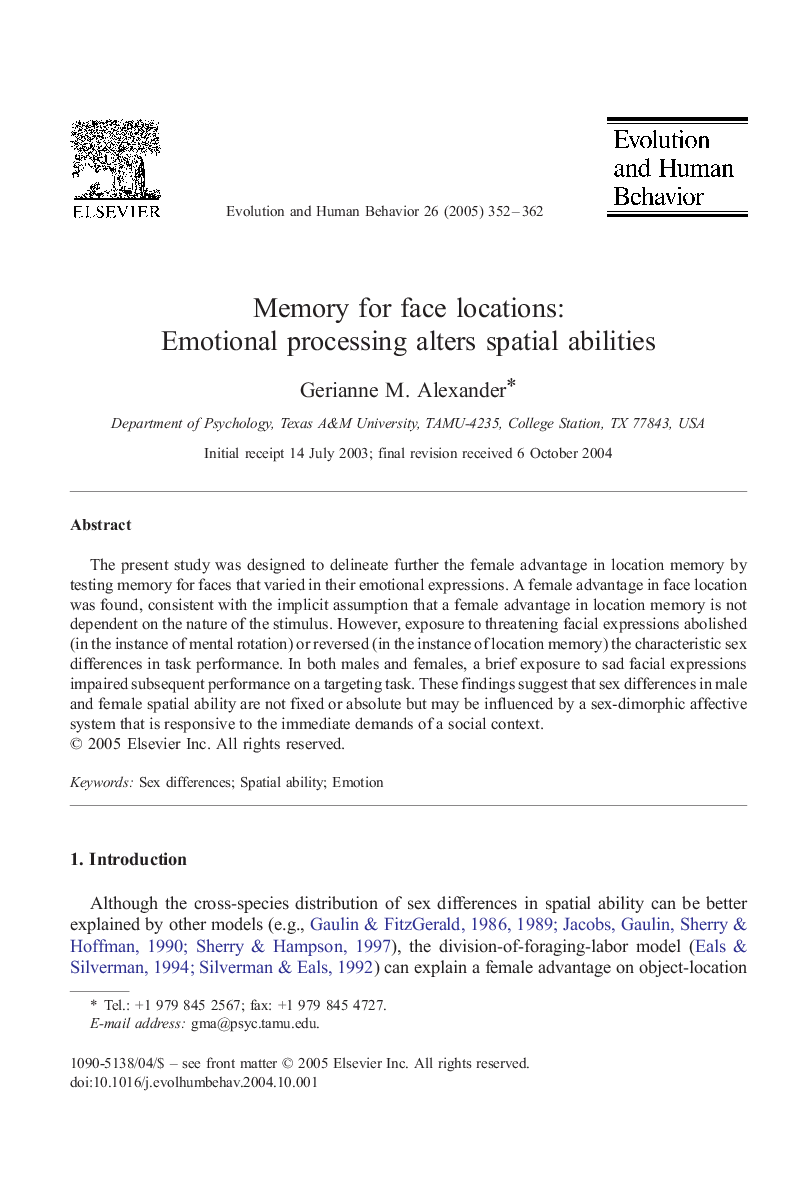 The present study was designed to delineate further the female advantage in location memory by testing memory for faces that varied in their emotional expressions. A female advantage in face location was found, consistent with the implicit assumption that a female advantage in location memory is not dependent on the nature of the stimulus. However, exposure to threatening facial expressions abolished (in the instance of mental rotation) or reversed (in the instance of location memory) the characteristic sex differences in task performance. In both males and females, a brief exposure to sad facial expressions impaired subsequent performance on a targeting task. These findings suggest that sex differences in male and female spatial ability are not fixed or absolute but may be influenced by a sex-dimorphic affective system that is responsive to the immediate demands of a social context.

Although the cross-species distribution of sex differences in spatial ability can be better explained by other models (e.g., Gaulin & FitzGerald, 1986, Gaulin & FitzGerald, 1989, Jacobs et al., 1990 and Sherry & Hampson, 1997), the division-of-foraging-labor model (Eals & Silverman, 1994 and Silverman & Eals, 1992) can explain a female advantage on object-location memory in humans. On this latter view, differential selection pressures arising from hunting versus gathering activities put a premium on different spatial competencies in ancestral men and women. Accordingly, the cognitive demands of hunting favored male spatial abilities that enhanced the capture of animals, whereas the cognitive demands of gathering plant food favored female abilities to identify the shape and color of edible plants and to locate them by remembering their proximity to landmarks (e.g., a particular tree or rock). Consistent with this formulation, a present-day male advantage is reliably documented on a variety of spatial tasks that appear to support successful hunting, including spatial navigation (Moffat, Hampson, & Hatzipantelis, 1998), mental rotation (Linn & Petersen, 1974), and the accurate aiming of projectiles (Watson & Kimura, 1991). Furthermore, in tasks developed specifically to test the evolutionary hypothesis of a female advantage for spatial location memory, women outperform men in their memory for object locations in a visual spatial array (Eals & Silverman, 1994 and Silverman & Eals, 1992).