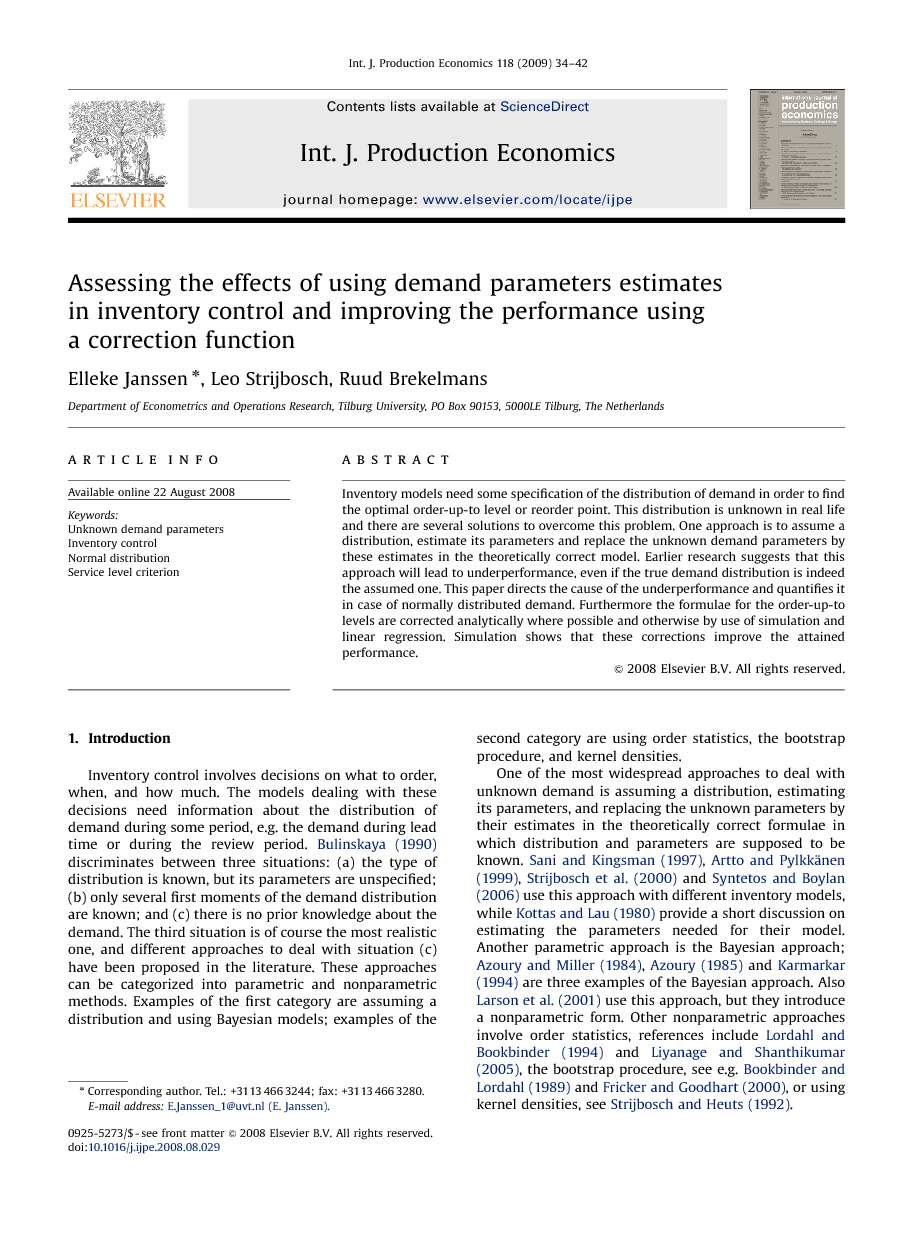 Inventory models need some specification of the distribution of demand in order to find the optimal order-up-to level or reorder point. This distribution is unknown in real life and there are several solutions to overcome this problem. One approach is to assume a distribution, estimate its parameters and replace the unknown demand parameters by these estimates in the theoretically correct model. Earlier research suggests that this approach will lead to underperformance, even if the true demand distribution is indeed the assumed one. This paper directs the cause of the underperformance and quantifies it in case of normally distributed demand. Furthermore the formulae for the order-up-to levels are corrected analytically where possible and otherwise by use of simulation and linear regression. Simulation shows that these corrections improve the attained performance.

Inventory control involves decisions on what to order, when, and how much. The models dealing with these decisions need information about the distribution of demand during some period, e.g. the demand during lead time or during the review period. Bulinskaya (1990) discriminates between three situations: (a) the type of distribution is known, but its parameters are unspecified; (b) only several first moments of the demand distribution are known; and (c) there is no prior knowledge about the demand. The third situation is of course the most realistic one, and different approaches to deal with situation (c) have been proposed in the literature. These approaches can be categorized into parametric and nonparametric methods. Examples of the first category are assuming a distribution and using Bayesian models; examples of the second category are using order statistics, the bootstrap procedure, and kernel densities. One of the most widespread approaches to deal with unknown demand is assuming a distribution, estimating its parameters, and replacing the unknown parameters by their estimates in the theoretically correct formulae in which distribution and parameters are supposed to be known. Sani and Kingsman (1997), Artto and Pylkkänen (1999), Strijbosch et al. (2000) and Syntetos and Boylan (2006) use this approach with different inventory models, while Kottas and Lau (1980) provide a short discussion on estimating the parameters needed for their model. Another parametric approach is the Bayesian approach; Azoury and Miller (1984), Azoury (1985) and Karmarkar (1994) are three examples of the Bayesian approach. Also Larson et al. (2001) use this approach, but they introduce a nonparametric form. Other nonparametric approaches involve order statistics, references include Lordahl and Bookbinder (1994) and Liyanage and Shanthikumar (2005), the bootstrap procedure, see e.g. Bookbinder and Lordahl (1989) and Fricker and Goodhart (2000), or using kernel densities, see Strijbosch and Heuts (1992). Consider the approach of assuming a distribution, and let the assumed distribution be the normal one, since it is often used both in research and in practice; see Zeng and Hayya (1999). Furthermore, Strijbosch and Moors (2006) give references to recent articles that involve the normal distribution. The assumption of normality is made because it yields tractable results and it seems to give quite good approximations if used on data with a low coefficient of variation (see Silver et al., 1998; Zipkin, 2000). However, the normal distribution has two major disadvantages: it can take on negative values and is symmetric, while actual demand is nonnegative and often skewed to the right. This may not impose serious problems if the coefficient of variation is low (Zipkin, 2000) or if the demand during review/lead time consists of many individual and independent demands (Silver et al., 1998). For high values of the coefficient of variation, however, these disadvantages get more important; hence Strijbosch and Moors (2006) suggested two simple modifications of the normal distribution. Tyworth and O’Neill (1997) and Lau and Lau (2003) investigate the (non)robustness of using the normal approximation with an (s,Q)(s,Q) inventory policy. This paper will not deal with situation (c), but with the less realistic situation (a): the true distribution is known, but its parameters are unspecified, so that the effect of estimating them can be studied. Silver and Rahnama, 1986 and Silver and Rahnama, 1987 have investigated this effect in an (s,Q)(s,Q) inventory policy with a cost criterion. They constructed a function that determined the expected cost of estimating the demand distribution rather than knowing it, and they concluded that this function is not symmetrical: underestimating causes larger costs than overestimating. In the second article they propose a method that deliberately biases the reorder point upwards. Strijbosch et al. (1997) and Strijbosch and Moors (2005) have investigated the same effect for an (R,S)(R,S) inventory policy with a service level criterion. Both papers concluded that also in this case the order-up-to level needed to be biased upwards. Note that the (s,Q)(s,Q) and (R,S)(R,S) policies are equivalent (see Silver et al., 1998), so the results of Silver and Rahnama, 1986 and Silver and Rahnama, 1987 apply to the (R,S)(R,S) policy and the results of Strijbosch et al. (1997) and Strijbosch and Moors (2005) apply to the (s,Q)(s,Q) policy as well. This paper will focus on two service level criteria within an (R,S)(R,S) inventory policy with zero lead time, so every RR time units the inventory is replenished up to the order-up-to level SS and the order is delivered instantaneously. The independent and identically distributed demands during review periods (denoted by XiXi) have a normal distribution with mean μμ and standard deviation σσ, which leads to a coefficient of variation ν=σ/μν=σ/μ. As mentioned before, the normal distribution could lead to negative demand and in our model this is interpreted as returned goods, so demand is actually net demand (demanded goods minus returned goods). In addition, the goods returned by customers can be sent back to the supplier, thus the inventory level at the start of a review period will always equal SS. Furthermore, demand during t+1t+1 consecutive review periods is assumed to be stationary, and the first tt periodic review demands are used to estimate the mean and standard deviation of the demand in review period t+1t+1. The mean and standard deviations are estimated by their sample statistics. We prefer using sample statistics instead of exponential smoothing, since derivations are more tractable, while the conclusions will be similar. In forecasting this method is often referred to as the (simple) moving average. Section 2 discusses the P1P1 service criterion in short. An analytical correction of the order-up-to level is given for the case that only μμ is unknown. Section 3 focusses on the P2P2 service criterion. First two theoretical situations are considered for illustrative purposes: the cases that μμ (μμ and σσ) is (are) unknown, but σσ and View the MathML sourceν(ν) are (is) known. The main 3.3 and 3.4 treat the important case that these three parameters are all unknown. We show by simulation that just plugging in estimates leads to serious underperformance. Besides, we derive a correction function for the safety factor that nearly gives the desired fill rates. The last section concludes this research, and provides directions for further research.

This paper has investigated a common approach in inventory management for dealing with the unknown distribution of demand. This approach is to assume a distribution, estimate its parameters using historical demand information, and replace the parameters in the theoretically correct inventory model by its estimates. Assuming a distribution provides tractable results, but it can be too rigid to represent the real demand. However, whether or not a specific distribution should be assumed is beyond the scope of this paper. We have assumed that the demand during review is truly normally distributed. In steps the information about the mean and variance is reduced. First, only the mean is assumed to be unknown and using the common approach results in the order-up-to levels View the MathML sourceS(μ^t,σ,cα) for a P1P1 criterion and View the MathML sourceS(μ^t,σ,cβ) for a P2P2 criterion. Both order-up-to levels will not ensure that the desired service is reached. This can be resolved by replacing the standard deviation σσ with the square root of the forecast error variance στστ, where View the MathML sourceτ=1+1/t. Second, also the standard deviation becomes unknown, although the coefficient of variation is assumed to be known. This case is less tractable and, therefore, only the more interesting P2P2 criterion is considered for this case. The order-up-to level using the correction factor ττ becomes View the MathML sourceS(μ^t,σ^tτ,cβτ), for which we have shown that the expected value will be too low. Furthermore, simulation has shown that the desired service is indeed not reached when using this order-up-to level. Finally, also the coefficient of variation νν is unknown and in that case only simulation is used to find that the performance is again worse compared to the case when νν is known. We have developed a correction for the order-up-to level with the help of simulation and linear regression. Using this correction, which is a function of View the MathML sourceν,β and tt, ensures that the desired service is reached closely in general: the largest deviations are 0.0032 below the desired service and 0.0097 above. It can be concluded that simply replacing the parameters in a theoretical correct inventory control model by its estimates results in underperformance, even if the true distribution belongs to the assumed distribution family. With a simple correction the achieved service can be improved and using the correction function View the MathML sourceκ^2(ν,t,β) results in closely reaching the desired service. This correction function provides inventory managers with a relatively simple tool that improves the service levels of their products and can be implemented without much effort. This paper focussed on normally distributed demand within an (R,S)(R,S) inventory policy with zero lead time. In future research, similar results could also be derived for other inventory control policies, e.g. an (R,s,S)(R,s,S) or (R,s,Q)(R,s,Q) policy, or for other demand distributions, e.g. a gamma distribution. Furthermore, this paper assumed that demand during t+1t+1 consecutive review periods is stationary, but in most real life situations the demand pattern changes over time. We could investigate how well our method works in such a situation. Moreover, in this paper only the last tt observations are used to estimate the demand parameters, thus non-stationarity is taken into account to some extent. This forecast is known as the moving average. Another forecasting method, exponential smoothing, is often used in real life, as it reacts better to changes in the demand pattern compared to the moving average. We could also investigate how well our method works in combination with exponential smoothing.