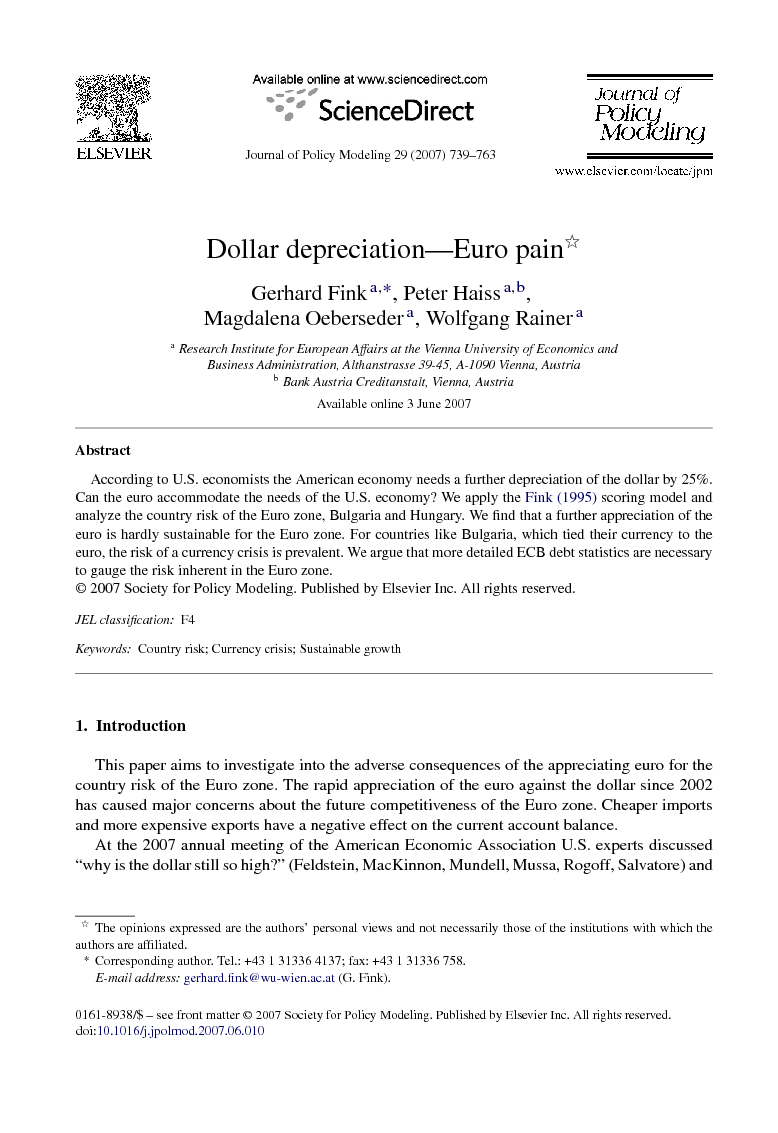 According to U.S. economists the American economy needs a further depreciation of the dollar by 25%. Can the euro accommodate the needs of the U.S. economy? We apply the Fink (1995) scoring model and analyze the country risk of the Euro zone, Bulgaria and Hungary. We find that a further appreciation of the euro is hardly sustainable for the Euro zone. For countries like Bulgaria, which tied their currency to the euro, the risk of a currency crisis is prevalent. We argue that more detailed ECB debt statistics are necessary to gauge the risk inherent in the Euro zone.

This paper aims to investigate into the adverse consequences of the appreciating euro for the country risk of the Euro zone. The rapid appreciation of the euro against the dollar since 2002 has caused major concerns about the future competitiveness of the Euro zone. Cheaper imports and more expensive exports have a negative effect on the current account balance. At the 2007 annual meeting of the American Economic Association U.S. experts discussed “why is the dollar still so high?” (Feldstein, MacKinnon, Mundell, Mussa, Rogoff, Salvatore) and came to the conclusion that the dollar still would have to depreciate by about 25%. But, what about the euro? Can the euro accommodate the needs of the U.S. economy? Since the Euro zone is a fairly large economic area with an important internal market, we include two relatively small and export-oriented economies into our analysis, which both depend on the Euro zone and have a euro-oriented monetary regime. The first is Bulgaria, which since 1997 has pegged its currency to the euro. The second is Hungary, which has pegged the forint to the euro, but permitted its exchange rate to fluctuate within a band of ±15% around the central parity. The issues are whether the Euro zone could sustain a further appreciation against the dollar and whether small economies, dependent on the Euro zone, could sustain a further appreciation? We adopt a signaling approach to assess the country risk of these three countries. Our analysis is based on an application of the Fink, 1993 and Fink, 1995 scoring model that uses a medium size set of macroeconomic variables to assess the economic risk of a country and attributes a heavy weight to debt outstanding. Over the 2000–2005 period we analyze the country risk of Hungary and the Euro zone. For Bulgaria, the investigated period has been extended to 1991–2005 to illustrate how our model covers the two severe economic crises of the 1990s. The assessment is followed by a groupwise comparison of the indicators used in the country risk model for Bulgaria, Hungary and the Euro zone. Based on debt, trade and currency movements, we conclude that if the euro would continue to appreciate, the outlook for both Bulgaria and the Euro zone would not be bright for the 2007–2009 period. The rest of the paper is structured as follows. In Section 2 we give a brief introduction into our method of country risk assessment. Section 3 presents our findings of the risk assessment of Bulgaria, Section 4 of Hungary and Section 5 of the Euro zone. In Section 6 we compare our findings. Finally, Section 7 presents our economic policy implications. The paper ends with a summary in Section 8.

After Bulgaria was hit by the economic crisis of 1996/1997, it developed quite well. The model shows an improvement of the country risk of Bulgaria from 45 points in 1998 to 69 points in 2005. However, the model projects a likely increase in the country risk in the years to come. This gives a clear signal to policy makers in Bulgaria to reconsider economic policy and exchange rate policy, in particular. To avoid an increase of the country risk in the future, special attention should be given to the development of the real exchange rate, which has a direct effect on the export/import ratio: If imports continue to grow faster than exports, Bulgaria will experience an increasing pressure on its current account. It has to foster exports and control imports. If the euro continues to soar, flexible exchange rates might be supportive. External debt burden relative to GDP and exports: As an increasing current account deficit has to be financed, the external debt stock will further rise in the years to come. The recent increase in short-term external debt to 25% of all external liabilities in Bulgaria is an early warning signal. An increase in short-term debt gives a clear signal of decreasing creditworthiness. Foreign exchange reserves: The increasing current account deficits are likely to reduce the foreign exchange reserves. However, Bulgaria needs to keep its foreign exchange reserves on a level adequate for maintaining a short-term liquidity. Apparently, so far reserves could be borrowed abroad, but only on a short-term basis. Inflation rate: Bulgaria should try to hold the inflation at or below its 2005 level of 5%. Flexibility in exchange rates may require more emphasis on incomes policy and monetary policy to keep inflation rates from soaring again. 7.2. Hungary Hungary’ outlook is not as bad. Hungary might be at the verge of a debt trap but not yet too deep into it. Hungary starts from a low level of the rating, but growth rates point in the right direction. After the drop in the ratings for economic power, stability and debt burden in 2004, these ratings are projected to steadily increase until 2009. The main problem of Hungary is the short-term transfer quota, indicating a net outflow of capital due to large interest payment. Interest rates/growth rate of exports: The interest rates stayed more or less constant over the observed period. However, Hungary's export growth rate plummeted in 2005 to merely 10.3%, compared to 29% in 2004. For the future it would be important for Hungary to accelerate again its exports growth rate. External debt: The scoring model also projects a slight increase of the external debt over the period 2006–2009. Therefore, policy makers need to keep an eye on the development of external debt. Special attention should be given to the short-term external debt, which has increased to 24% of total external liabilities in 2005. 7.3. The Euro zone The Euro zone is characterized by a strong economic power and a constantly high stability. However, the model projects a decrease in the economic power, mainly due to the low GDP growth and the increasingly unfavourable export/import ratio. Economic stability is also projected to decline after 2005, as a consequence of a projected current account deficit. The notable drawback is the very high external debt, which consequently finds expression in a low score for the key-ratios of debt burden. To avoid the possible increase of the country risk of the Euro zone, some measures need to be taken. Export/import ratio: The Euro zone is facing the problem that its imports are growing faster than its exports. A further appreciation of the euro against the dollar would make it difficult, if not impossible, to change that. Current account: If the growth rates of exports and imports remain constant as of 2005, the scoring model projects a current account deficit for 2006 and the following years. External debt: The external debt of the Euro zone has increased from 37.6% of GDP in 2000 to 47.7% in 2005. The projected current account deficits, resulting ultimately from a continuing appreciation of the euro, for the period 2006–2009 could exacerbate this trend, leading to a further increase in external debt. The latest data for the Euro zone underpin the signals the scoring model sent. The current account of the Euro zone turned negative in 2006, with a deficit amounting to US$ 47 billion, or 0.4% of GDP.4 This even exceeds the projected value of 0.08% of GDP.