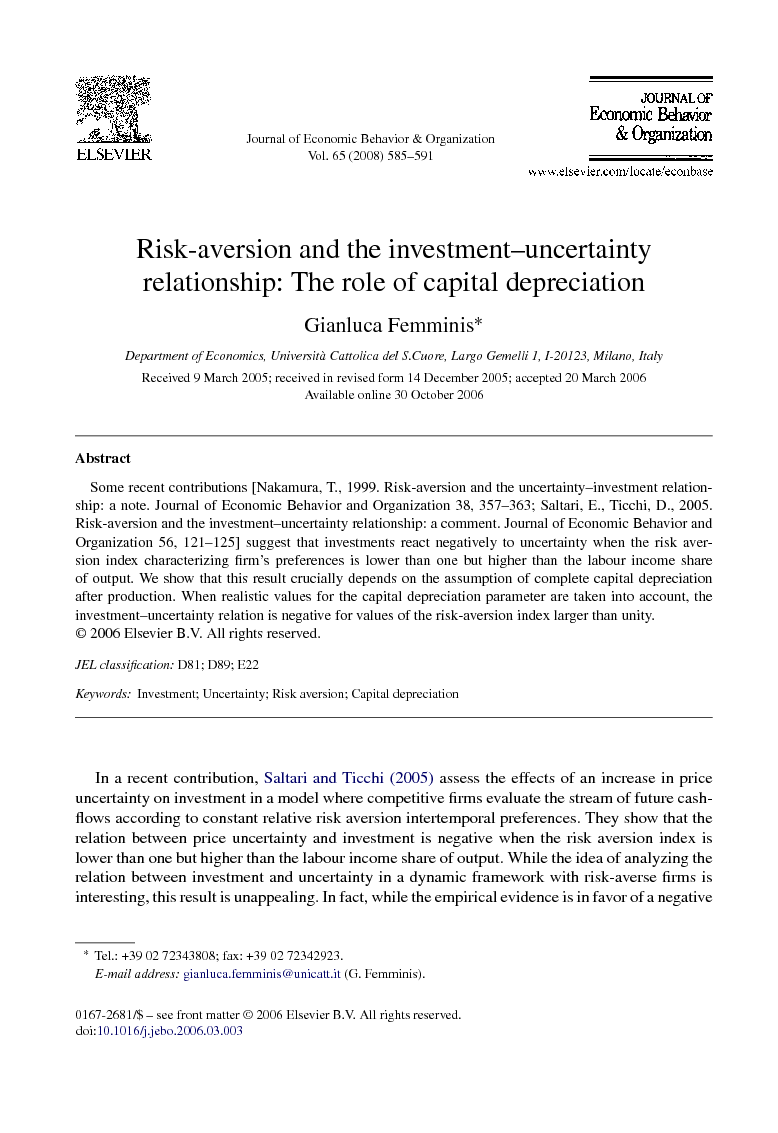 Some recent contributions [Nakamura, T., 1999. Risk-aversion and the uncertainty–investment relationship: a note. Journal of Economic Behavior and Organization 38, 357–363; Saltari, E., Ticchi, D., 2005. Risk-aversion and the investment–uncertainty relationship: a comment. Journal of Economic Behavior and Organization 56, 121–125] suggest that investments react negatively to uncertainty when the risk aversion index characterizing firm’s preferences is lower than one but higher than the labour income share of output. We show that this result crucially depends on the assumption of complete capital depreciation after production. When realistic values for the capital depreciation parameter are taken into account, the investment–uncertainty relation is negative for values of the risk-aversion index larger than unity.

We have shown that taking into consideration realistic values for the depreciation parameter, it is easy to obtain a negative investment–uncertainty relationship for a risk aversion parameter larger than unity. In fact, a depreciation parameter lower than unity gives more prominence to the flexibility effect because it reduces the impact of the price variance on the expected value of future income, therefore dampening the role of risk aversion. As we have already remarked, when γ>1γ>1, the flexibility effect negatively affects investment due to the negative income effect generated by an increase in the average future rate of return. We believe our result is interesting because the empirical evidence is in favor of a negative relationship between investment and uncertainty (see, e.g., Ferderer, 1993, Leahy and Whited, 1996 and Guiso and Parigi, 1999). The last paper, besides providing support for the view that irreversibility is significant in accounting for the negative relationship between uncertainty and investment, shows that such a relation is negative (although scarcely significant) also for firms characterized by low degrees of irreversibility. Caselli et al. (2003), using sectoral data, document that demand uncertainty had negative effects on investment in Europe during the 1990s. In sum, when sensible values for the capital depreciation parameter are taken into account, the investment–uncertainty relation becomes negative for realistic values of the risk aversion parameter.