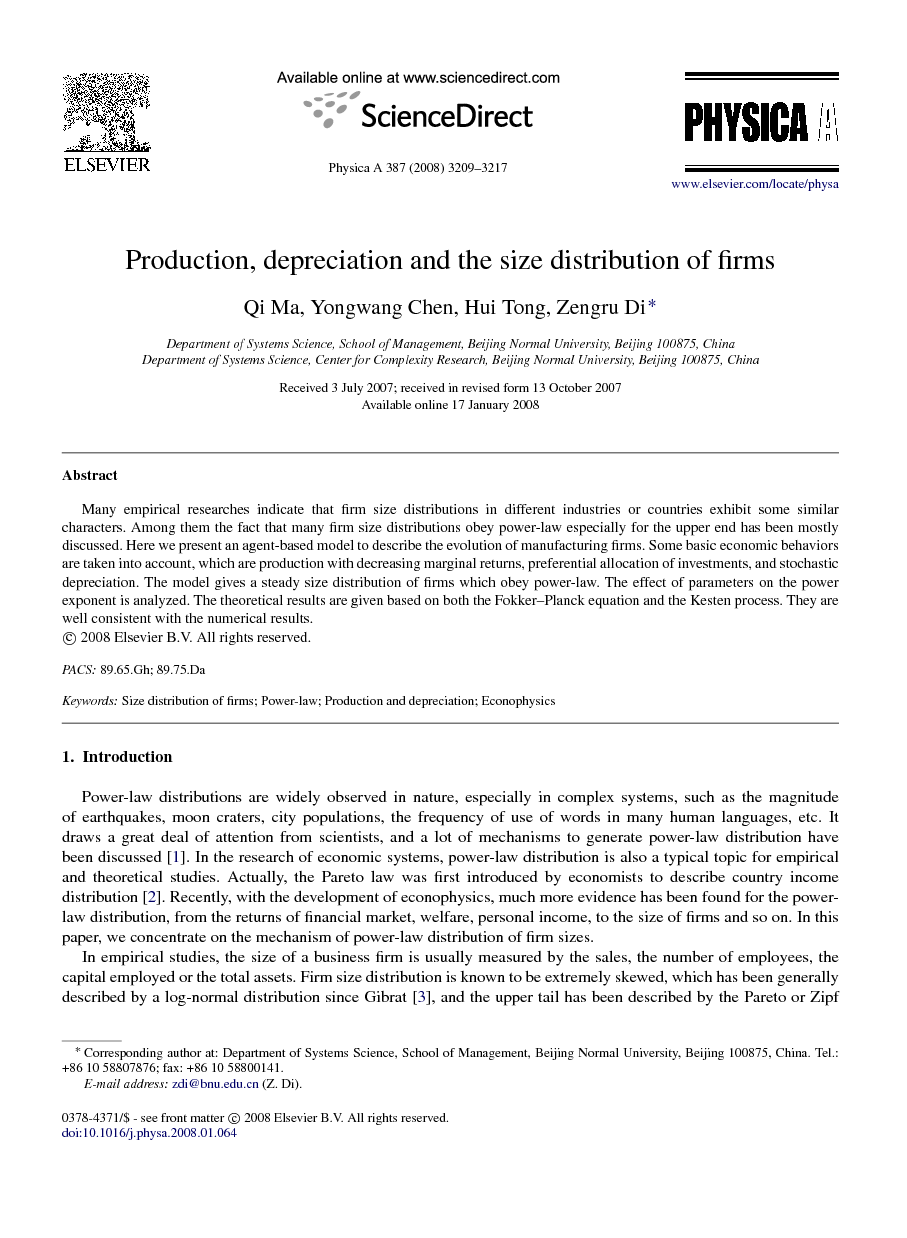 Many empirical researches indicate that firm size distributions in different industries or countries exhibit some similar characters. Among them the fact that many firm size distributions obey power-law especially for the upper end has been mostly discussed. Here we present an agent-based model to describe the evolution of manufacturing firms. Some basic economic behaviors are taken into account, which are production with decreasing marginal returns, preferential allocation of investments, and stochastic depreciation. The model gives a steady size distribution of firms which obey power-law. The effect of parameters on the power exponent is analyzed. The theoretical results are given based on both the Fokker–Planck equation and the Kesten process. They are well consistent with the numerical results.

Power-law distributions are widely observed in nature, especially in complex systems, such as the magnitude of earthquakes, moon craters, city populations, the frequency of use of words in many human languages, etc. It draws a great deal of attention from scientists, and a lot of mechanisms to generate power-law distribution have been discussed [1]. In the research of economic systems, power-law distribution is also a typical topic for empirical and theoretical studies. Actually, the Pareto law was first introduced by economists to describe country income distribution [2]. Recently, with the development of econophysics, much more evidence has been found for the power-law distribution, from the returns of financial market, welfare, personal income, to the size of firms and so on. In this paper, we concentrate on the mechanism of power-law distribution of firm sizes. In empirical studies, the size of a business firm is usually measured by the sales, the number of employees, the capital employed or the total assets. Firm size distribution is known to be extremely skewed, which has been generally described by a log-normal distribution since Gibrat [3], and the upper tail has been described by the Pareto or Zipf law [4] and [5]. Recent researches on firm size distribution in detail reveal that the firm size distribution can be fitted by power-law precisely with US, Japanese or European firms’ data [6], [7], [8], [9] and [10]. Furthermore, the power exponents of the cumulative distribution are all around 1 (ranging from 0.7 to 1.2). Since the Pareto–Zipf law of firm size exhibits some similar characters with that of some physical systems which contain numerous interacting units, this interesting property attracts many scholars working on the perspectives of physics in accordance with these empirical facts [11], [12], [13] and [14]. Amaral et al. have studied firm size growth dynamics since 1997 [15] and developed a stochastic model, which is a complex system with large number of interacting units, and each unit has its own internal structures and independent growth dynamics. The model can fit well with the empirical result [16] and [17]. Takayasu’s research was based on firm size dynamics analogy to the aggregation-annihilation reaction model [18]. Axtell has insisted on using complexity approach to deal with the problem, and believed that agent-based modelling together with evolutionary dynamics should be helpful to understand the formation of power-law [19]. Besides, some other models have also been presented, which are based on the competition dynamics [20], the information transition, herd behaviors [21], and the proportional growth for the firms’ sizes [22]. On the base of multi-agent model, taken account of production and depreciation as firms’ basic economic behaviors, here we present a multi-agent model to describe the evolution of manufacturing firms. The system includes many individual manufacturing firms. Their sizes are characterized by capital stocks [7]. They give aggregate products by the Cobb–Douglas production function. Then each firm gets preferential returns proportional to its capital stock. And the new capital stock of each firm results both from this investment and a stochastic depreciation. According to the computer simulation, we got a power-law distribution of firm sizes. Moreover, We analyzed the effect of parameters on the power exponents and found that power exponents of the distribution do change along with the parameters. Then the model is simplified to a conserved system without influencing the final firm size distribution. Meanwhile, we analyzed the conserved model theoretically based on Fokker–Planck equation and Kesten process. The final distribution obeys power-law, which is well consistent with the numerical analysis. And the numerical power exponent of the firm size distribution changes the same way with the theoretical value when the parameters get changed. The paper is organized as follows. Section 2 describes the production-depreciation model and shows the final steady distribution of firm sizes by computer simulations. The relations of power exponent with the attractor and depreciation rate are also given. Then in Section 3, the model is simplified into a conserved one, i.e. the total capital stock of the system keeps constant with the evolution of firms. The Fokker–Planck equation for the evolution of firm size distribution is constructed. The final steady distribution is given, which obeys power-law for the upper end and the exponent is determined by the attractor and depreciation rate. The Kesten process gives similar results and they are all consistent well with the computer simulations. Some concluding remarks are given in Section 4.