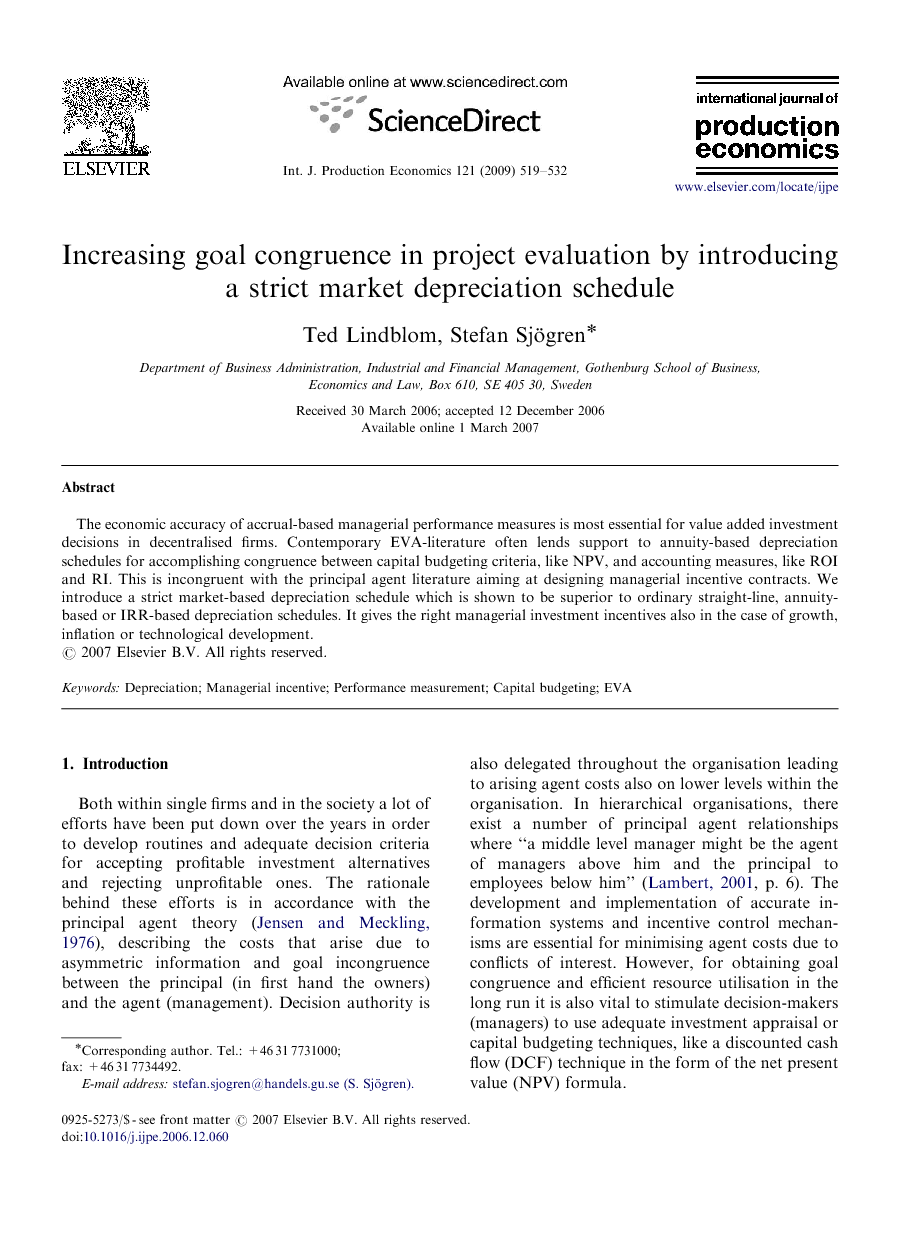 The idea of basing depreciation charges on economic valuation principles instead of accruals is not new in itself. The novelty of our proposed adjustment is that it is linking managerial investment incentives to firm performance. The implementation of a strict market depreciation schedule will lay a foundation for market value added investment decisions by improving the accuracy of accrual-based performance measures. The decision-maker that approves an investment with an expected positive NPV will be acknowledged and credited already the year the project is pursued. By this reduction of inconsistency between economic and accounting measures long term decisions are encouraged. Throughout our analysis, an important prerequisite has been that projected cash flows occur as expected and, thus, the project proceeds “according to plan”. In reality this is of course a very strong requirement. In real life estimates on future cash flows are likely to be based on unsatisfactory statistics and consequently these estimates may be rather insecure or even erroneous. With unreliable forecasts of future cash flows, a managerial incentive system based on expected present values will of course neither be a surety for the future success of projects approved nor a certain evaluation of the correctness of the decisions being made. Contrary to a conventional management accounting system, however, the use of the proposed depreciation schedule will indirectly contribute to a more reliable decision support system as it implies a more appropriate and qualitative follow-up of investment appraisal decisions. This will gradually lead to improved statistics and accurate information in a poor and insufficient post-auditing system. In this paper, the development and demonstration of a strict market depreciation schedule has been carried out without any explicit consideration of moral hazard problems. This does not mean that the implementation would increase agent costs due to opportunistic behaviour. On the contrary, as it enforces the firm to adopt a cash flow-based follow-up system of investment decisions, we are inclined to argue that over time it is likely to contribute to reduced information asymmetry between the principal and the agent as well as to more accurate estimations of future cash flows. A recent case study of EVA-based management by Riceman et al. (2002) lends support to this standpoint. An important finding in their study is that the success of introducing a value-based (EVA) bonus programme is highly dependent on managers understanding of the EVA concept. In order to improve the decision-making of middle managers it is vital to categorise the success or failure of investment decisions into manageable and transparent measures. In this respect, bonus programmes based on a strict market depreciation schedule ought to be qualified as the financial performance of managers would be judged on common and well-known evaluation criteria, i.e. RI or ROI.