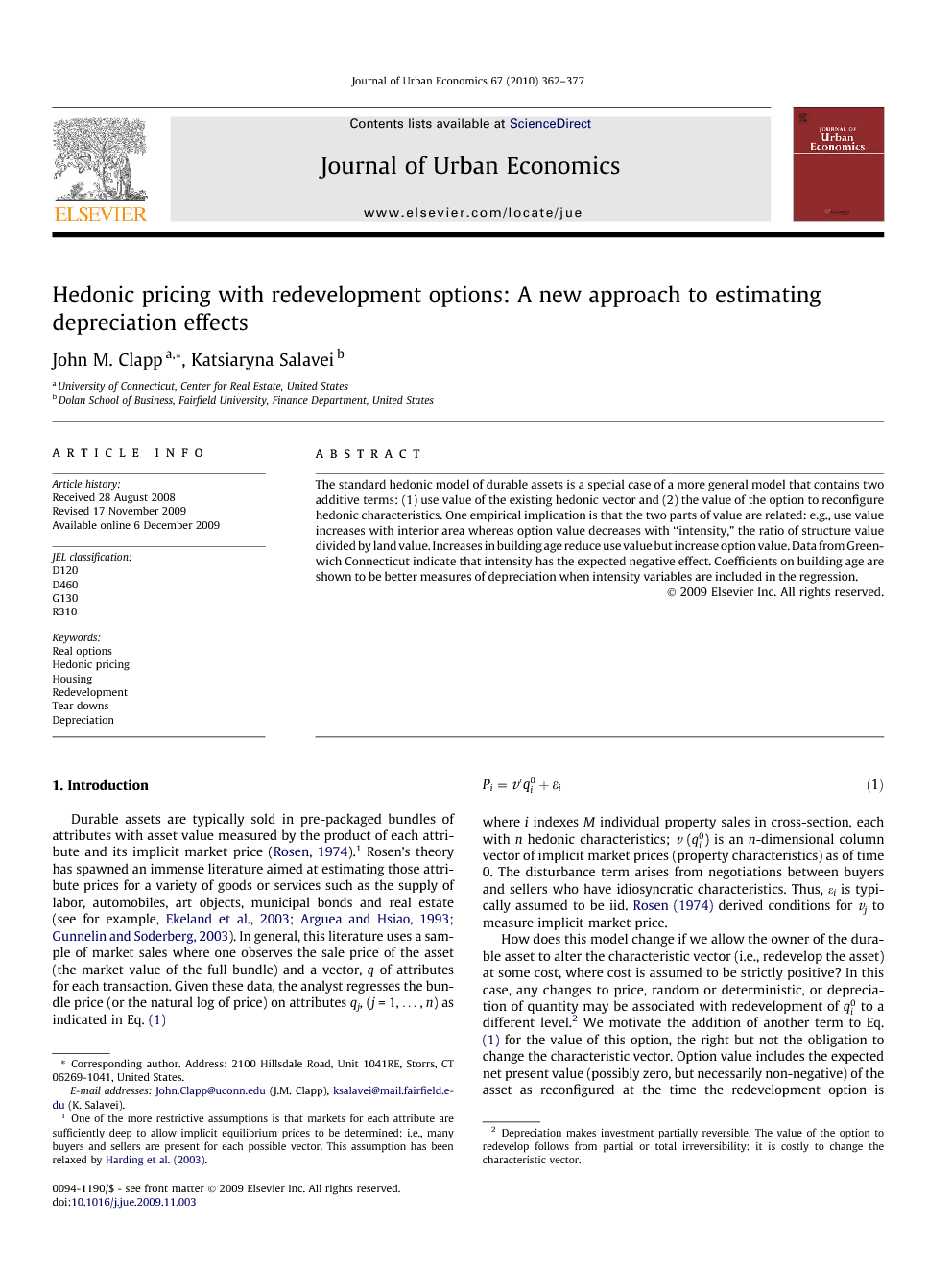 The standard hedonic model of durable assets is a special case of a more general model that contains two additive terms: (1) use value of the existing hedonic vector and (2) the value of the option to reconfigure hedonic characteristics. One empirical implication is that the two parts of value are related: e.g., use value increases with interior area whereas option value decreases with “intensity,” the ratio of structure value divided by land value. Increases in building age reduce use value but increase option value. Data from Greenwich Connecticut indicate that intensity has the expected negative effect. Coefficients on building age are shown to be better measures of depreciation when intensity variables are included in the regression.

Durable assets are typically sold in pre-packaged bundles of attributes with asset value measured by the product of each attribute and its implicit market price (Rosen, 1974).1 Rosen’s theory has spawned an immense literature aimed at estimating those attribute prices for a variety of goods or services such as the supply of labor, automobiles, art objects, municipal bonds and real estate (see for example, Ekeland et al., 2003, Arguea and Hsiao, 1993 and Gunnelin and Soderberg, 2003). In general, this literature uses a sample of market sales where one observes the sale price of the asset (the market value of the full bundle) and a vector, q of attributes for each transaction. Given these data, the analyst regresses the bundle price (or the natural log of price) on attributes qj, (j = 1, … , n) as indicated in Eq. (1) equation(1) View the MathML sourcePi=v′qi0+εi Turn MathJax on where i indexes M individual property sales in cross-section, each with n hedonic characteristics; v (View the MathML sourceqi0) is an n-dimensional column vector of implicit market prices (property characteristics) as of time 0. The disturbance term arises from negotiations between buyers and sellers who have idiosyncratic characteristics. Thus, ɛi is typically assumed to be iid. Rosen (1974) derived conditions for vj to measure implicit market price. How does this model change if we allow the owner of the durable asset to alter the characteristic vector (i.e., redevelop the asset) at some cost, where cost is assumed to be strictly positive? In this case, any changes to price, random or deterministic, or depreciation of quantity may be associated with redevelopment of View the MathML sourceqi0 to a different level.2 We motivate the addition of another term to Eq. (1) for the value of this option, the right but not the obligation to change the characteristic vector. Option value includes the expected net present value (possibly zero, but necessarily non-negative) of the asset as reconfigured at the time the redevelopment option is exercised. For example, it is common in some housing markets to see demolition of smaller older houses and reconstruction of “McMansions” at a much higher intensity, the exercise of a call option. Because of our focus on teardowns or substantial renovations we define the “intensity” of existing characteristics as a scalar aggregation index for the amount of structure per unit land value. The aggregator variable increases with interior square footage and other amenities (e.g., bathrooms, fireplaces or a pool) and decreases with building age and with land value.3 Theory demonstrates that use value (i.e., standard hedonic value when option value is near zero) increases and option value decreases with the aggregator variable. The purpose of this study is to provide empirical evidence that, in the absence of correctly-specified variables for option value, hedonic estimates of implicit market prices will be biased. Specifically, variables such as building age and lot size are likely to capture some of the omitted option value; the direction of bias will be analyzed here. Intuitively, the coefficient on age measures depreciation (i.e., reduced asset value due to aging) for new structures that are near optimal size (see Malpezzi et al., 1987). But the depreciation rate is smaller for an older structure or for any property with substantial option value, and it is irrelevant near the redevelopment time. Moreover, in the absence of a correctly specified option value term in the hedonic regression, the age variable may capture option value, so the hedonic regression may indicate that property value increases with age for older houses.4 Malpezzi et al. (1987) identify three problems with using the coefficient on building age to measure depreciation: (1) age is correlated with omitted location variables; (2) construction quality varies with age and older better quality units are more likely to survive; and (3) land does not depreciate, and newer houses are built on land with higher value. In response, we use geocoded transactions to include numerous location variables in the regression, and we introduce land value explicitly into the option value term of our regression.5 It is our treatment of land value as part of the option value term that is our greatest departure from previous hedonic literature. We use a certainty model with constant exponential depreciation to motivate the addition of an option value term to the standard hedonic regression, Eq. (1). In our model, depreciation, together with constant or increasing land value implies an optimal time for redevelopment to a new, higher level of intensity. Our model is closest to that of Wheaton (1982), who allows durable capital to be replaced by newer, larger structure yielding higher rent.6 Any empirical test of hedonic theory with option value must deal with two major issues: (1) Appropriate measurement of the intensity of the existing vector. (2) How to specify a nonlinear regression so as to correctly identify use value and option value. Functional form is highly relevant to model identification because option value depends negatively on the structure size and other desirable characteristics whereas these same variables enter positively into the use value portion of the model. Our empirical results suggest that, in a market with only 1–3% option value for the median property, the bias in the age coefficient is substantial. Cumulative depreciation effects for a 20 year old property without much option value are underestimated by about 3% points whereas those for a property with a lot of redevelopment potential are overestimated by about 6% points. On the other hand, coefficients on lot size and interior area are not biased by economically significant amounts. In markets with more option value, one can expect to observe more bias in the coefficients.7 The next section develops theory for the value of an embedded option to redevelop the vector of hedonic characteristics in Eq. (1). Section 3 analyzes the implications of the redevelopment option for the standard hedonic regression; it specifies a nonlinear hedonic valuation model. The data and empirical results are described in Section 4. Section 5 concludes.

Hedonic characteristics of durable assets may contain an implicit characteristic, the embedded option to redevelop to a higher level. Option pricing theory suggests two additive terms: the use value term is the same as in standard hedonic theory, with the same expected coefficients. The second term in the valuation equation, a non-negative option term, is a decreasing function of the aggregate level of the existing vector of hedonic characteristics per unit land value: i.e., decreases in the intensity of the existing property. This analysis implies that the standard hedonic model is mis-specified, but only in the presence of significant option value. In this case, theory shows that omitted variables bias is downward, so that implicit prices of positively-valued characteristics will be underestimated in the absence of the option term. Option theory suggests that coefficients on building age will capture some of the option value: i.e., be biased upward in the absence of an option value term. We test these implications of the model with data from Greenwich, Connecticut. Empirical results confirm the major implication of the theory: variables measuring the intensity of the existing vector of hedonic characteristics have the expected negative exponent. Moreover, a nonlinear model is capable of producing results that plausibly distinguish between option value and use value. The data support the prediction that the value of the option to redevelop is an important and statistically significant characteristic associated with durable assets. Our data indicate that significant bias may be present in the coefficients on age variables which are typically viewed as measuring depreciation and obsolescence. With a properly specified option term, the negative effects of age are primarily associated with properties that have little option value.47 The presence of substantial option value (low levels of intensity) eliminates almost all the effects of building age. We conclude that coefficients on the age variable are biased upward by omission of the intensity variable even when relatively little option value is present in the market.48 On the other hand, the coefficients on the log of interior square footage are biased downward by statistically significant but economically small amounts.