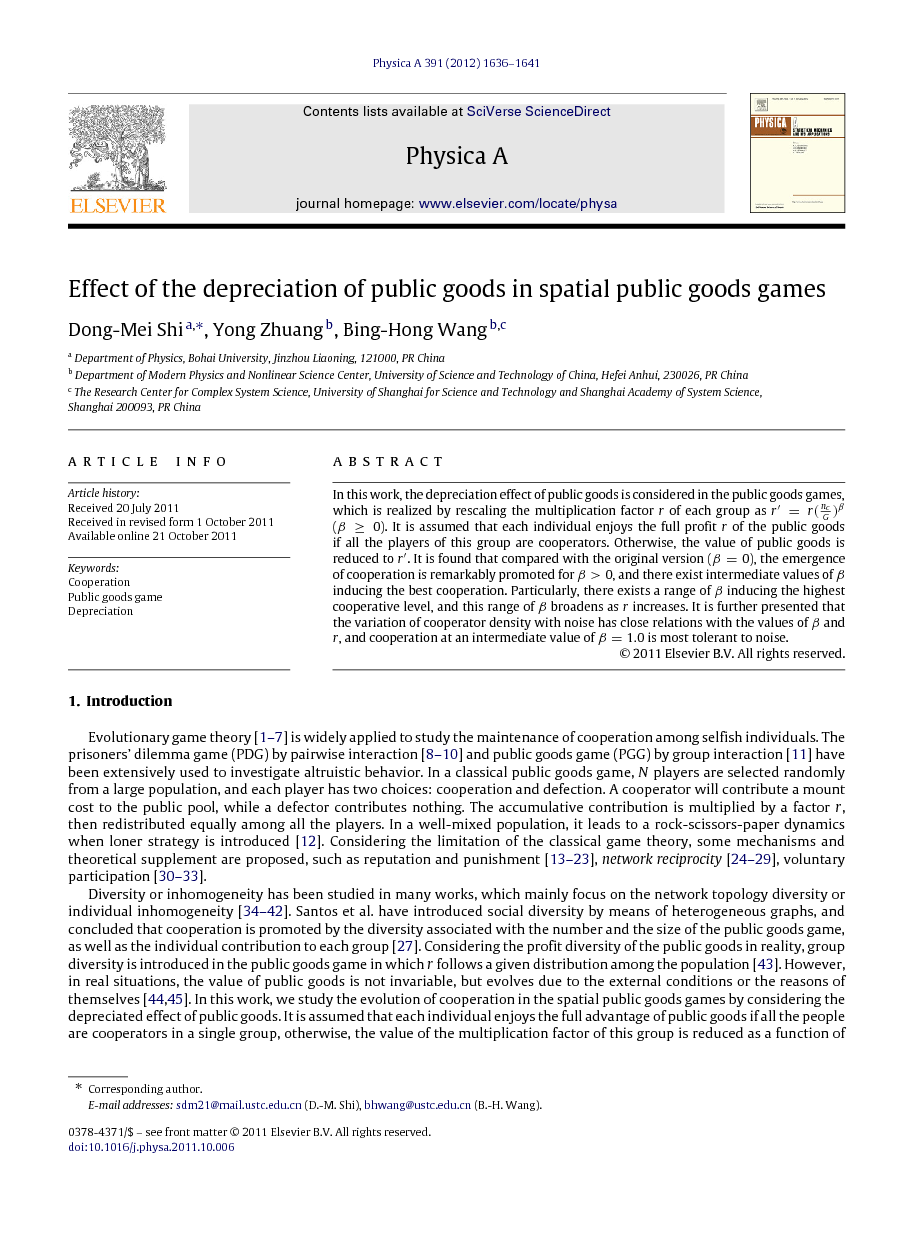 In this work, the depreciation effect of public goods is considered in the public goods games, which is realized by rescaling the multiplication factor rr of each group as View the MathML sourcer′=r(ncG)β (β≥0β≥0). It is assumed that each individual enjoys the full profit rr of the public goods if all the players of this group are cooperators. Otherwise, the value of public goods is reduced to r′r′. It is found that compared with the original version (β=0β=0), the emergence of cooperation is remarkably promoted for β>0β>0, and there exist intermediate values of ββ inducing the best cooperation. Particularly, there exists a range of ββ inducing the highest cooperative level, and this range of ββ broadens as rr increases. It is further presented that the variation of cooperator density with noise has close relations with the values of ββ and rr, and cooperation at an intermediate value of β=1.0β=1.0 is most tolerant to noise.

Evolutionary game theory [1], [2], [3], [4], [5], [6] and [7] is widely applied to study the maintenance of cooperation among selfish individuals. The prisoners’ dilemma game (PDG) by pairwise interaction [8], [9] and [10] and public goods game (PGG) by group interaction [11] have been extensively used to investigate altruistic behavior. In a classical public goods game, NN players are selected randomly from a large population, and each player has two choices: cooperation and defection. A cooperator will contribute a mount cost to the public pool, while a defector contributes nothing. The accumulative contribution is multiplied by a factor rr, then redistributed equally among all the players. In a well-mixed population, it leads to a rock-scissors-paper dynamics when loner strategy is introduced [12]. Considering the limitation of the classical game theory, some mechanisms and theoretical supplement are proposed, such as reputation and punishment [13], [14], [15], [16], [17], [18], [19], [20], [21], [22] and [23], network reciprocity [24], [25], [26], [27], [28] and [29], voluntary participation [30], [31], [32] and [33]. Diversity or inhomogeneity has been studied in many works, which mainly focus on the network topology diversity or individual inhomogeneity [34], [35], [36], [37], [38], [39], [40], [41] and [42]. Santos et al. have introduced social diversity by means of heterogeneous graphs, and concluded that cooperation is promoted by the diversity associated with the number and the size of the public goods game, as well as the individual contribution to each group [27]. Considering the profit diversity of the public goods in reality, group diversity is introduced in the public goods game in which rr follows a given distribution among the population [43]. However, in real situations, the value of public goods is not invariable, but evolves due to the external conditions or the reasons of themselves [44] and [45]. In this work, we study the evolution of cooperation in the spatial public goods games by considering the depreciated effect of public goods. It is assumed that each individual enjoys the full advantage of public goods if all the people are cooperators in a single group, otherwise, the value of the multiplication factor of this group is reduced as a function of View the MathML sourcer(ncG)β. It is proved that there exist intermediate values of ββ inducing the best cooperation, and the range of optimal values of ββ broadens as rr increases. We also investigated the effect of noise on cooperation by adopting this mechanism, and found that cooperation stays at the highest level for most of the range of noise at a moderate value of β=1.0β=1.0. The paper is organized as follows. In Section 2, a description of the model is proposed in detail. Numerical simulations and the corresponding analysis are presented in Section 3. Conclusions are drawn in Section 4.