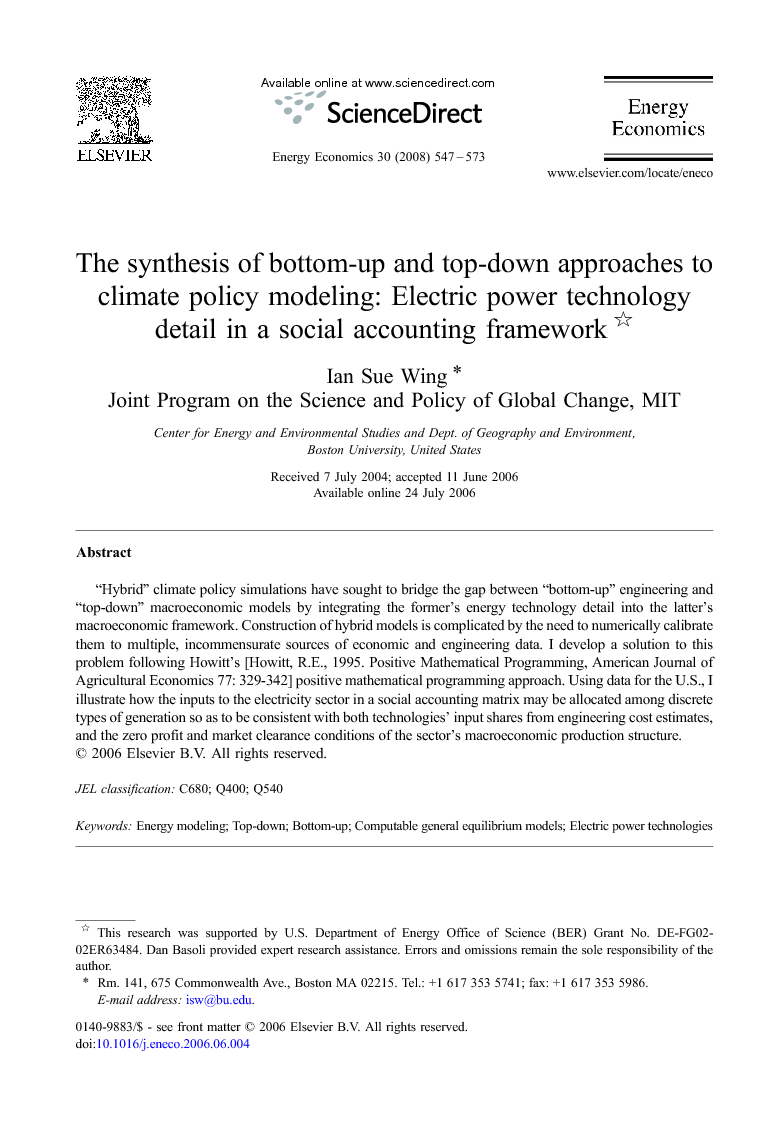 “Hybrid” climate policy simulations have sought to bridge the gap between “bottom-up” engineering and “top-down” macroeconomic models by integrating the former's energy technology detail into the latter's macroeconomic framework. Construction of hybrid models is complicated by the need to numerically calibrate them to multiple, incommensurate sources of economic and engineering data. I develop a solution to this problem following Howitt's [Howitt, R.E., 1995. Positive Mathematical Programming, American Journal of Agricultural Economics 77: 329-342] positive mathematical programming approach. Using data for the U.S., I illustrate how the inputs to the electricity sector in a social accounting matrix may be allocated among discrete types of generation so as to be consistent with both technologies' input shares from engineering cost estimates, and the zero profit and market clearance conditions of the sector's macroeconomic production structure.

A crucial factor in mitigating future climate change is the expansion of energy supply technologies that have low or zero carbon dioxide (CO2) emissions (IPCC, 2001). Computational policy models used to assess the climate implications of economic growth, energy use and GHG emissions represent these technologies in different ways, which has resulted in divergent predictions of the contributions of new energy sources – particularly renewables – to the future global energy supply. The main divide is between “bottom-up” engineering models, which simulate the interactions among the numerous individual energy technologies that make up the energy system of an economy, and “top-down” macroeconomic models, which simulate the effect on prices of the supply–demand interactions across the markets for all commodities, energy and non-energy alike.1 Attempts to reconcile these two approaches have focused on creating hybrid models which incorporate bottom-up technology detail within a top-down macroeconomic framework. The aim of this paper is to further this line of inquiry by developing a method for transparently integrating engineering data on technology detail into the macroeconomic accounts on which top-down models are empirically calibrated. I apply Howitt's (1995) positive mathematical programming (PMP) approach to data for the U.S. electric power sector to estimate the allocation of capital, labor, energy and material inputs among discrete activities and technologies in a way that is consistent with both the input shares implied by engineering cost data, and the conditions of zero profit and market clearance which define the sector's production structure from a macroeconomic perspective. The results demonstrate how the inconsistencies between engineering and macroeconomic data may be reconciled in a manner that is both transparent and portable among a variety of modeling applications. The disparities in the structure and scope of bottom-up and top-down models imply that each has a comparative advantage in addressing complementary subsets of the research questions which arise in energy and climate policy analysis. Top-down models are a standard tool for assessing the macroeconomic costs of CO2 abatement and its economy-wide feedbacks on prices, commodity and factor substitution, income and economic welfare. Bottom-up models are used to investigate the impacts of CO2 emissions constraints on the portfolio of technologies that make up the supply and demand components of the energy system, in order to identify low-cost abatement opportunities or design technology-based subsidies or emission standards. However, the results of these two approaches have tended to diverge, with top-down models typically indicating larger macroeconomic costs as the consequence of a given mitigation policy (NAS, 1991: 62; Grubb et al., 1993; Wilson and Swisher, 1993; IPCC, 2001). The origins of this divide are by now well understood, with perhaps the biggest factor being bottom-up models' technological optimism about low-cost abatement potentials.2 Attempts to reconcile these differences have focused on the development of so-called “hybrid” models, which attempt to bridge the bottom-up/top-down divide by combining the detailed engineering specifications of energy supply technologies with the sector-wide nested production functions of CGE models.3 Despite being the focus of much recent research (Boehringer, 1998; Boehringer et al., 2003; Frei et al., 2003; Kumbaroglu and Madlener, 2003; McFarland et al., 2004) this approach is still very much in its infancy. Perhaps the most important reason is the difficulty involved in constructing databases which integrate macroeconomic data with engineering detail in way that facilitates simple calibration of hybrid models. To be consistent with bottom-up approaches, hybrid models' representation of the supplies of and the demands for energy commodities should faithfully reflect the engineering characteristics of different energy supply and conversion technologies. Simultaneously, to be consistent with topdown approaches, the activity levels and the input demands of the individual technologies introduced into hybrid models should match the inter-industry data employed in macroeconomic studies. The problem is that the engineering and the economic data are rarely consistent with each other. Thus, calibrating a model to faithfully capture both the aggregate and the disaggregate characteristics of energy's role in a CO2 emission-constrained economy necessitates the balancing of competing demands. The current state of the technical art in this regard is more a matter of judicious assumptions and careful, manual calibration than systematic, replicable procedures. It is in addressing this need for systematization that this paper makes its contribution. Its major advance is to simplify the calibration of hybrid models through the creation of a mathematical scheme that first reconciles and then integrates the kinds of engineering information used in bottom-up models with the macroeconomic data used to calibrate top-down models. This scheme is applied to the development of a hybrid model of the electric power sector in the U.S. using data which is readily available. The methodology developed in the paper is deliberately simple, transparent, and above all, replicable, and, as far as the author is aware, represents the first completely general and robust scheme for calibrating hybrid energy policy simulations. This approach will benefit economists, engineers and modelers by speeding up the reconciliation of top-down and bottom-up data on the energy system of an economy, expediting comparisons of the effects of different relative price regimes on the structures of the costs of energy production, and, hopefully, facilitating the construction of hybrid models without tears. The rest of the paper is organized as follows. Section 2 sets the stage by presenting simplified topdown and bottom-up models of the electric power sector, and using themto identify the challenges in reconciling the data and algebraic relationships that underlie each of them. Themeat of the paper is in Section 3, which presents a realistic top-down model of the electric power sector, outlines the engineering data with which, in a perfect world, its macroeconomic relationships should be consistent, and develops the calibration procedure for establishing consistency between the two. Section 4 describes the data for the U.S. electric power sector, and the engineering and economic calculations necessary to re-cast this information into a format suitable for reconciliation. The results are analyzed and discussed in Section 5. Section 6 concludes by briefly discussing the methodology's usefulness in constructing CGE models with technology detail.

This paper has developed a procedure for disaggregating the top-down macroeconomic representation of the electric power sector in a SAM for the U.S. into specific electricity supply technologies in a manner that is consistent with these technologies' bottom-up engineering characteristics. Starting with a SAM-based top-down model of the electric power sector and cost shares derived from engineering data, a calibration procedure was developed that apportioned inputs to the electric power sector in the SAM among discrete generation technologies by minimizing the deviation of the allocation of inputs from that implied by engineering cost shares, subject to the zero-profit and market-clearance constraints of the sector's macroeconomic production structure. The results demonstrate the success of this approach, on one hand emphasizing its robustness to variations in the assumptions employed in constructing the data, and on the other the ability to assimilate and reconcile disparate, inconsistent sources of data in a manner that is both transparent and replicable. Still, much can be done to refine the approach developed here. One important limitation of the paper is its focus on the point estimates generated the calibration procedure while paying too little attention to uncertainties in the activity totals in the top-down model or input cost shares of the bottom-up data. Methodologically, this shortcoming may be addressed by the use of more sophisticated matrix-balancing techniques such as maximum-entropy methods (Golan et al., 1996; Robinson et al., 2001) to estimate confidence bounds on the allocation. But the key prerequisite to this work will be the development of improved bottom-up and top-down datasets to which the procedure in the paper can be applied, perhaps relying on multiple data points over a number of years, but most crucially with a better resolution the value of inputs of fixed-factor primary energy resources to nuclear, hydro and renewable technologies. Finally, it is natural to ask how the results developed here can be used. The answer to this question is given in a companion article (SueWing, in press), which constructs a hybrid model of the U.S. economy which is calibrated to the data in Fig. 4 and Table 7, and compares its response to emission taxes with that of an identical top-down model that contains no technology detail. Future work will also illustrate how these benchmark data can be used to incorporate technology detail into a fully dynamic general equilibrium simulation of the kind described in Sue Wing and Popp (2006).