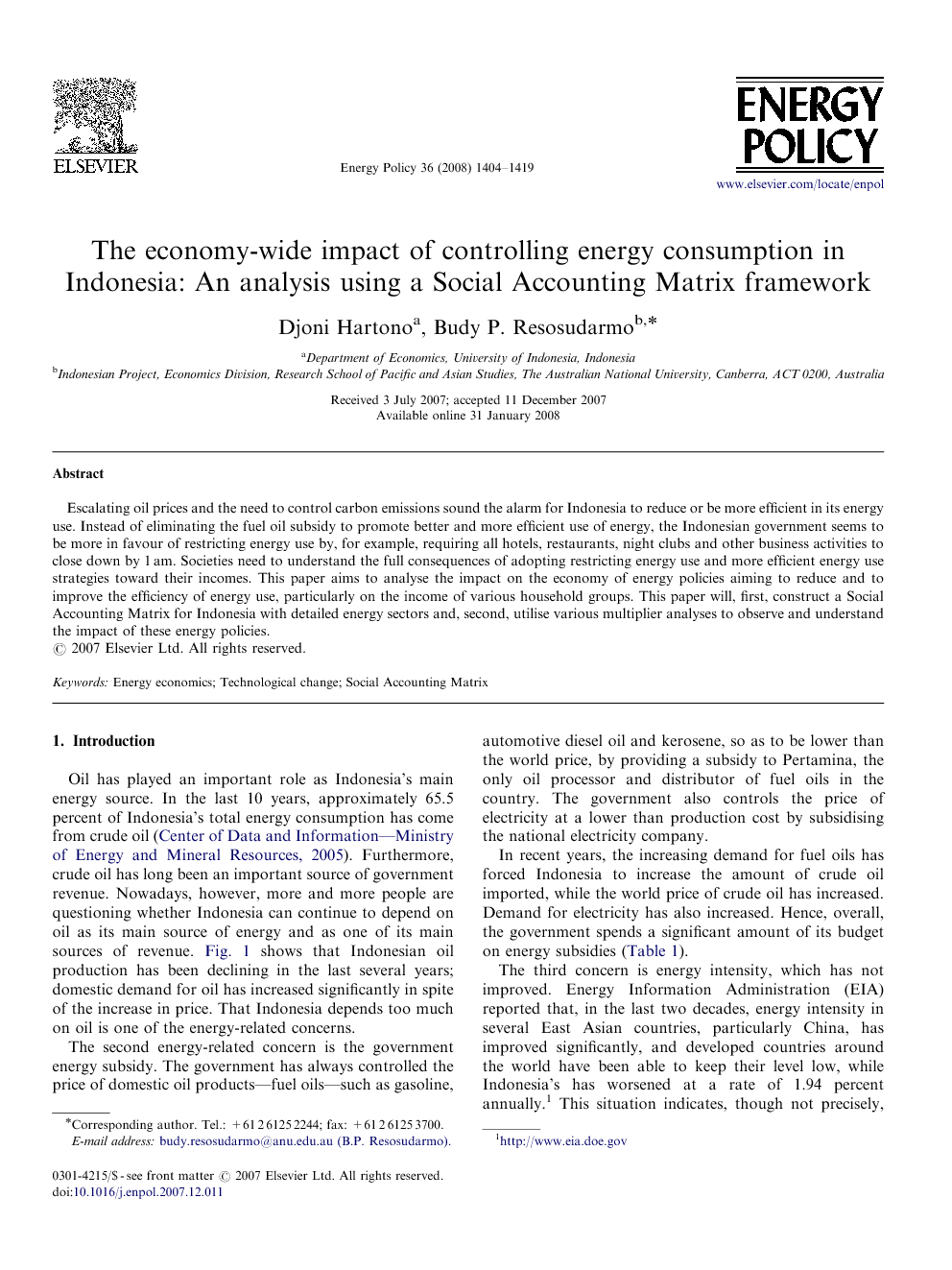 Escalating oil prices and the need to control carbon emissions sound the alarm for Indonesia to reduce or be more efficient in its energy use. Instead of eliminating the fuel oil subsidy to promote better and more efficient use of energy, the Indonesian government seems to be more in favour of restricting energy use by, for example, requiring all hotels, restaurants, night clubs and other business activities to close down by 1 am. Societies need to understand the full consequences of adopting restricting energy use and more efficient energy use strategies toward their incomes. This paper aims to analyse the impact on the economy of energy policies aiming to reduce and to improve the efficiency of energy use, particularly on the income of various household groups. This paper will, first, construct a Social Accounting Matrix for Indonesia with detailed energy sectors and, second, utilise various multiplier analyses to observe and understand the impact of these energy policies.

Oil has played an important role as Indonesia’s main energy source. In the last 10 years, approximately 65.5 percent of Indonesia’s total energy consumption has come from crude oil (Center of Data and Information—Ministry of Energy and Mineral Resources, 2005). Furthermore, crude oil has long been an important source of government revenue. Nowadays, however, more and more people are questioning whether Indonesia can continue to depend on oil as its main source of energy and as one of its main sources of revenue. Fig. 1 shows that Indonesian oil production has been declining in the last several years; domestic demand for oil has increased significantly in spite of the increase in price. That Indonesia depends too much on oil is one of the energy-related concerns. The second energy-related concern is the government energy subsidy. The government has always controlled the price of domestic oil products—fuel oils—such as gasoline, automotive diesel oil and kerosene, so as to be lower than the world price, by providing a subsidy to Pertamina, the only oil processor and distributor of fuel oils in the country. The government also controls the price of electricity at a lower than production cost by subsidising the national electricity company. In recent years, the increasing demand for fuel oils has forced Indonesia to increase the amount of crude oil imported, while the world price of crude oil has increased. Demand for electricity has also increased. Hence, overall, the government spends a significant amount of its budget on energy subsidies (Table 1). The third concern is energy intensity, which has not improved. Energy Information Administration (EIA) reported that, in the last two decades, energy intensity in several East Asian countries, particularly China, has improved significantly, and developed countries around the world have been able to keep their level low, while Indonesia’s has worsened at a rate of 1.94 percent annually.1 This situation indicates, though not precisely, that there has been an increasing trend towards inefficiency in primary energy use in Indonesia. Hence, there has been growing pressure on Indonesia to improve its efficiency in using primary energy. The fourth concern is negative externalities to the environment, both at local and global levels. At the local level, environmental problems related to energy use are generally human health problems caused by emissions from vehicles and industrial activities. At the global level, the main concerns are global climate change and global warming due to increasing emissions of greenhouse gases. The energy sector, through its production and exploitation activities, is considered to be the main contributor of greenhouse gases. EIA reported that the CO2 emission intensity of Indonesia has been worsening at a rate of 4.1% annually during the 1990s and early 2000s. With the above-mentioned problems in mind, the Indonesian government must develop various programs to promote better and more efficient use of energy. Eliminating the fuel oil subsidy; i.e., increasing the price of fuel oil, is the most common measure suggested as a way to encourage households and industries to be more efficient in using energy (or to save energy). Instead, the Indonesian government seems to be more in favour of restricting energy use by, for example, requiring all hotels, restaurants, night clubs and other business activities to close down by 1 am. The main argument is that, first, reducing the subsidy is expected to affect the poor more than the rich (Ikhsan et al., 2005; Sugema et al., 2005; World Bank, 2006). Second, innovations improving the efficiency of energy use might end up using more energy (Khazzoom, 1980; Lovins, 1988; Brookes, 1990; Binswanger, 2001). This phenomenon, commonly known as the rebound effect, occurs since the money saved by using less energy will eventually be used to buy other goods and services (which in turn need energy to be produced). Furthermore, lower use of energy pulls the energy price down. A lower energy price results in higher income, which is followed by a rise in demand for goods and services. Producers anticipate the rise in demand by raising their level of production (which results in higher use of energy). On the other hand, limiting the operating time of hotels, restaurants, night clubs, street lights, etc. will most likely not affect the poor and will avoid the rebound effect phenomenon. This paper aims to contribute to these debates between the need to improve energy efficiency and to limit its use. This paper develops a simple economywide model to analyse the impact of an improvement in efficiency of energy use, the cutting of the fuel oil subsidy and the restrictions of energy use for households and industries on the Indonesian economy, particularly on the income of various household groups. Whether or not a rebound effect phenomenon is happening will also be observed. This paper is expected to be useful as a comparative study for other developing countries which intend to control their energy use.

This paper, using an Indonesia Energy SAM, has elaborated the calculation methods for energy efficiency and energy restrictions, and analysed energy issues related to efficiency and restrictions in energy use, and their impacts on the Indonesian economy. There are some constraints concerning this study: (i) the method is relatively simple and does not address the price issue, while price is an important variable in energy issues in Indonesia, especially for fuel oil; (ii) the general equilibrium of the SAM in this model is static in nature, while in reality the system structure changes over time meaning that the parameters of the matrix change, hence less reliable for forecasting long-run trends; (iii) the SAM assumes fixed Leontief Technology, which implies that technologies are constant from the base year of the model until a particular period (usually 5 years). The other issue is on the reliability and validity of the Indonesian SAM, namely whether or not the SAM covers the whole of Indonesian economy, including those in rural areas and in informal sectors. BPS understands this issue, so when conducting the socio-economic survey which is one of the main input sources for the SAM, BPS tries to cover the informal sectors and rural economies as much as possible. It is, however, difficult to judge how successful BPS is in doing so. It is worth noting that only a few scholars and researchers have used the Energy SAM Table to discuss energy issues in Indonesia and by carefully taking into account all weaknesses concerning the methods implemented, some of the important conclusions that can be drawn from this study are as follows. First, a policy improving the efficiency of energy use is relatively better than a policy restricting the use of energy. In general, an improvement in energy efficiency increases the income of most household groups, while energy restriction decreases their incomes. Furthermore, the simulations show that an improvement in energy efficiency most likely will not cause a rebound effect or an increase in energy use. Second, a combination of reduction energy subsidy policy and policy improving the efficiency of energy use produces the best outcome in general. In the case where greater energy efficiency is reached without any reduction in government subsidy, household incomes will increase the most when all industry sectors and all households use electricity more efficiently. In case where more efficient energy use is achieved by a reduction of energy subsidy, household incomes will increase the most when all industry sectors and all households use automotive diesel oil more efficiently. Third, an improvement in energy efficiency should be emphasised more in industrial sectors than in households, as the former will increase household income by a greater amount than the increase created by the improvement in household energy efficiency. In general, the improvement in efficiency in industrial sectors should focus on the use of automotive diesel oil and electricity. Furthermore, specific recommendations on the industrial sectors that are suggested to trial more efficiency in energy consumption in order to result in a positive effect on household income are: (i) The Pulp and Paper Industry, Construction and Land Transportation for automotive diesel oil; and (ii) The Trade, Pulp and Paper Industry and Textile Industry for electricity.