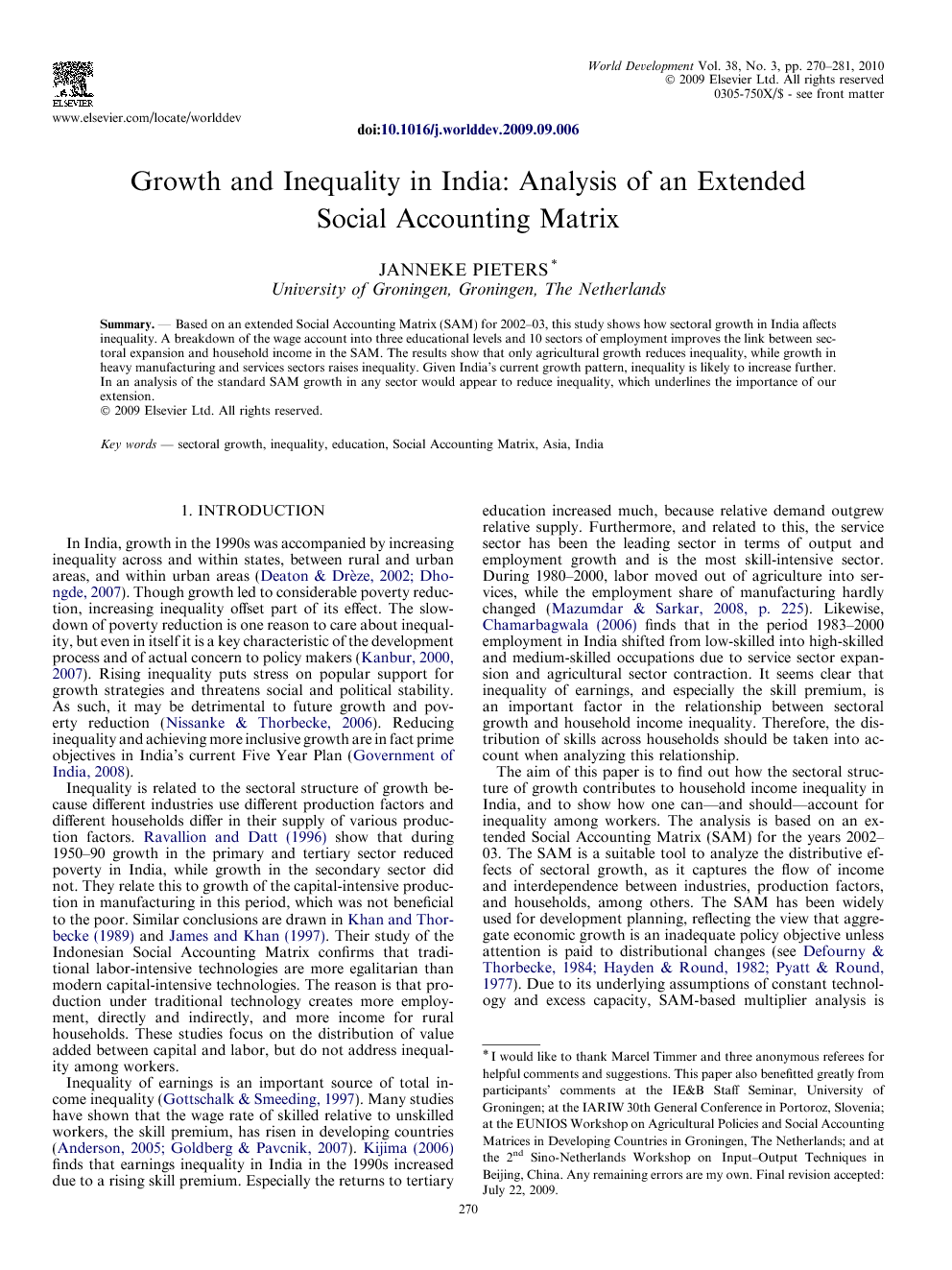 Based on an extended Social Accounting Matrix (SAM) for 2002–03, this study shows how sectoral growth in India affects inequality. A breakdown of the wage account into three educational levels and 10 sectors of employment improves the link between sectoral expansion and household income in the SAM. The results show that only agricultural growth reduces inequality, while growth in heavy manufacturing and services sectors raises inequality. Given India’s current growth pattern, inequality is likely to increase further. In an analysis of the standard SAM growth in any sector would appear to reduce inequality, which underlines the importance of our extension.

Rapid growth in India in the past decades has led to the relative decline of agriculture and growing importance of services. This has fueled inequality, which is likely to increase further in the future. Based on an extended SAM, we find that growth of community, social, and personal services raises inequality between and within household groups most, followed by heavy manufacturing and other services sectors. Only agricultural growth reduces inequality, but the growth potential of agriculture is limited compared to manufacturing and services. Much of our findings are explained by the high skill-intensity and skill premium of some sectors, combined with a high sector premium. This stresses the importance of taking into account the educational level and sector of employment of households, as well as sector- and education-specific wages, when analyzing the effects of sectoral growth on inequality. We find that the sector premium is higher in sectors with a higher public share of GDP, which is related to the observations by Deaton and Dre`ze (2002) that public salaries grew twice as fast as the agricultural real wage in the 1990s. It is not at all clear that public wages are driving wage differentials between sectors or to what extent, but this may be an interesting question for further research. We do not conclude that India’s development strategy should focus solely on agricultural growth to reduce inequality. Of course, investing in agriculture to increase the sector’s labor productivity could benefit the agricultural workers. But demand growth for agricultural products will be lower than for other sectors, so there is limited scope for expansion. Therefore, our results confirm the importance of expansion in unskilled-labor-intensive manufacturing, as argued by Kochhar et al. (2006) and Krueger (2007). Inclusive growth requires employment opportunities for lowskilled workers outside agriculture, in both rural and urban India. As a more general conclusion, our results confirm that the sectoral composition of growth and the production technology of sectors matter for inequality, in line with Ravallion and Datt (1996), Datt and Ravallion (2002), and James and Khan (1997). However, we find that the skill-intensity of a sector is more important for inequality than the capital-labor ratio. This is in line with the increasing wage inequality that has accompanied globalization in many developing countries (Anderson, 2005; Goldberg & Pavcnik, 2007). Since countries can differ greatly in terms of the sectoral structure of growth and production technologies, one should question the relevance of cross-country studies that assume a common relationship between GDP growth and inequality (e.g., Barro, 2000). We also draw an important methodological lesson from this study, namely, that a social accounting matrix (SAM) with a single wage account will produce misleading results: the level of aggregation in the wage account matters for the distributive effects of growth that can be measured. The standard SAM for India has a single wage account and shows that between-group inequality is neutral to the sectoral structure of growth. Only once labor is divided according to educational level and sector of employment, it becomes clear that the sectoral structure of growth matters for inequality. Though SAMs for other countries usually have separate labor accounts for different educational levels and sometimes for agricultural versus non-agricultural labor (e.g., Khan & Thorbecke, 1989, for Indonesia; Jensen & Tarp, 2005, for Vietnam), the subdivision according to sector of employment is never made. Especially when households are grouped on the basis of geography or ethnicity, the link with their sector of employment is too indirect. Besides improving this link, another advantage of our extension is that it adds information on within-group inequality of earnings. For India, we find within-group inequality constitutes more than one-fourth of total earnings inequality. This study is a simple exercise, and the results are best considered as an indication of the relationships we are interested in. Despite the limitations of the SAM model, the results are intuitive and emphasize the importance of inequality among workers due to differences in educational attainment and sector of employment in India’s economic structure. The increasing capital-intensity of India’s industrial sector is a concern to the government (Government of India, 2008), but it should be clear that employment creation will not be enough to secure equitable growth. Rather, a focus on employment growth for low-skilled labor is essential for reducing inequality.