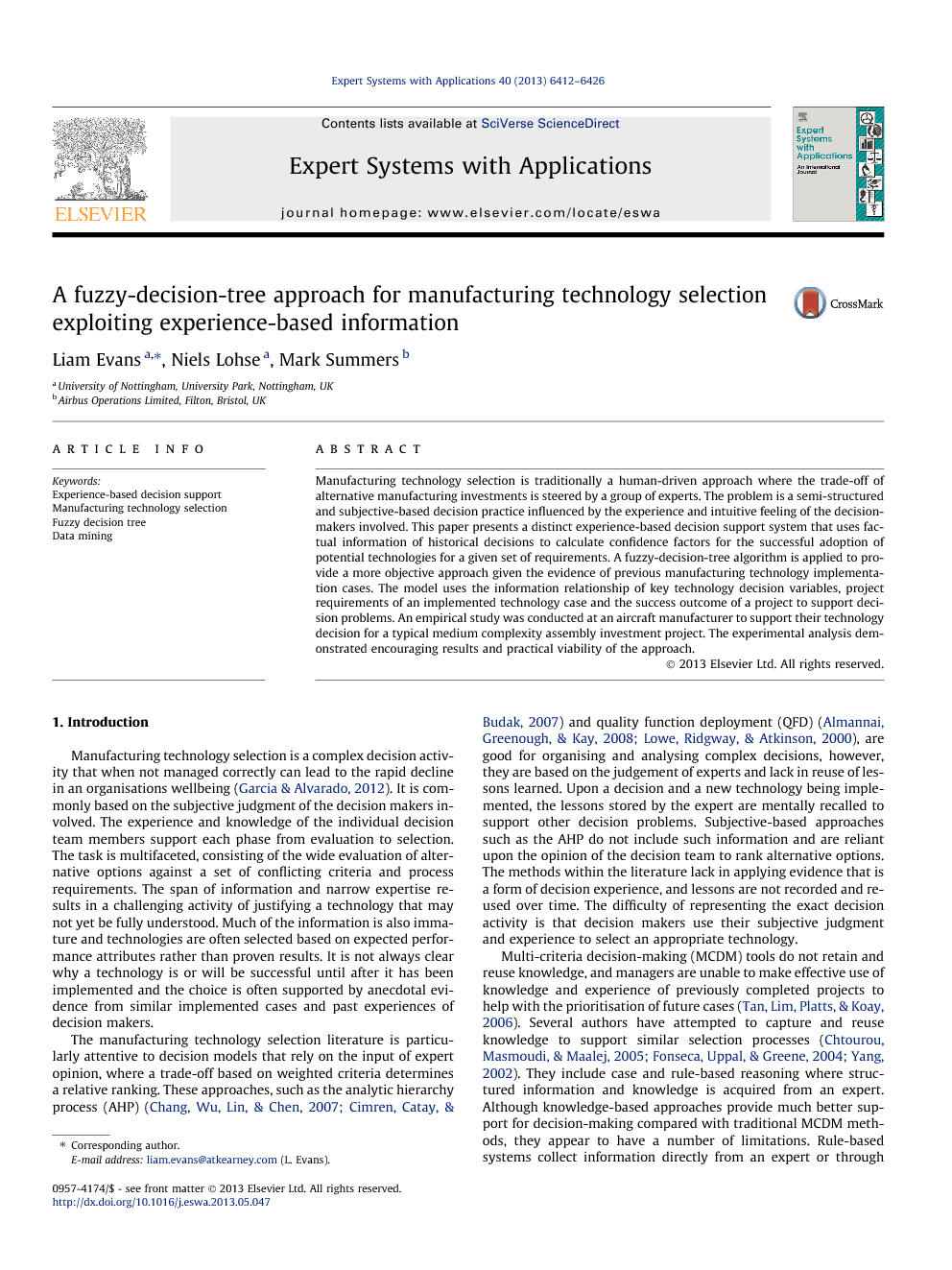 Manufacturing technology selection is traditionally a human-driven approach where the trade-off of alternative manufacturing investments is steered by a group of experts. The problem is a semi-structured and subjective-based decision practice influenced by the experience and intuitive feeling of the decision-makers involved. This paper presents a distinct experience-based decision support system that uses factual information of historical decisions to calculate confidence factors for the successful adoption of potential technologies for a given set of requirements. A fuzzy-decision-tree algorithm is applied to provide a more objective approach given the evidence of previous manufacturing technology implementation cases. The model uses the information relationship of key technology decision variables, project requirements of an implemented technology case and the success outcome of a project to support decision problems. An empirical study was conducted at an aircraft manufacturer to support their technology decision for a typical medium complexity assembly investment project. The experimental analysis demonstrated encouraging results and practical viability of the approach.

In this paper, we proposed a fuzzy decision tree (FDT) based approach for the justification of manufacturing technologies using an experience-based approach. The model considers various quantitative and qualitative elements that represent historical decisionmaking data of previous cases. The methodology has been developed to consider experience and intuition formed through historical cases. Compared with subjective models such as AHP that require precise judgments, the approach is based on the performance information of previously considered technologies in a more objective format. The initial observable performance and feedback from the case study is that the model supports experience-based decisionmaking that reflects a decision maker and is based on proven experience. Feedback from domain experts suggests that the performance predicted by the FDT-based model is a good reflection of the expected results. The reported model reflects well the decision process and it is considered an advantage that it provides a methodology to develop the underlying model over time. The model also provides a framework that can be applied in a much shorter time period compared with existing practices. Future research will focus on exploring using a range of FDTs with alternative class labels for problems with different objectives. Determining the creation of more than one FDT for several key decision parameters using the same basic characteristics for the cases may provide further support for decision makers. It appears to be also worthy of investigating the impact of using a larger numbers of cases.