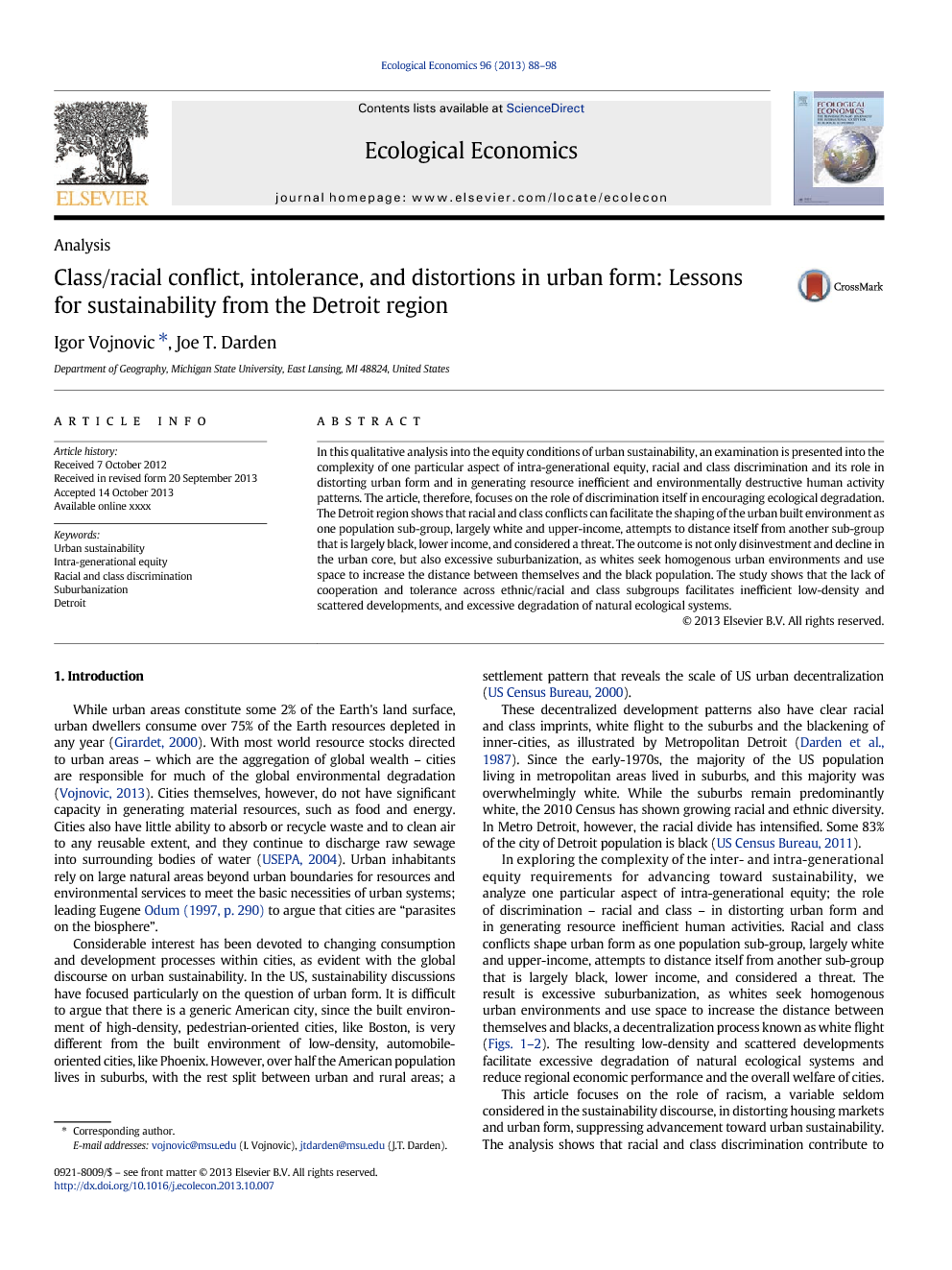 In this qualitative analysis into the equity conditions of urban sustainability, an examination is presented into the complexity of one particular aspect of intra-generational equity, racial and class discrimination and its role in distorting urban form and in generating resource inefficient and environmentally destructive human activity patterns. The article, therefore, focuses on the role of discrimination itself in encouraging ecological degradation. The Detroit region shows that racial and class conflicts can facilitate the shaping of the urban built environment as one population sub-group, largely white and upper-income, attempts to distance itself from another sub-group that is largely black, lower income, and considered a threat. The outcome is not only disinvestment and decline in the urban core, but also excessive suburbanization, as whites seek homogenous urban environments and use space to increase the distance between themselves and the black population. The study shows that the lack of cooperation and tolerance across ethnic/racial and class subgroups facilitates inefficient low-density and scattered developments, and excessive degradation of natural ecological systems.

While urban areas constitute some 2% of the Earth's land surface, urban dwellers consume over 75% of the Earth resources depleted in any year (Girardet, 2000). With most world resource stocks directed to urban areas – which are the aggregation of global wealth – cities are responsible for much of the global environmental degradation (Vojnovic, 2013). Cities themselves, however, do not have significant capacity in generating material resources, such as food and energy. Cities also have little ability to absorb or recycle waste and to clean air to any reusable extent, and they continue to discharge raw sewage into surrounding bodies of water (USEPA, 2004). Urban inhabitants rely on large natural areas beyond urban boundaries for resources and environmental services to meet the basic necessities of urban systems; leading Eugene Odum (1997, p. 290) to argue that cities are “parasites on the biosphere”. Considerable interest has been devoted to changing consumption and development processes within cities, as evident with the global discourse on urban sustainability. In the US, sustainability discussions have focused particularly on the question of urban form. It is difficult to argue that there is a generic American city, since the built environment of high-density, pedestrian-oriented cities, like Boston, is very different from the built environment of low-density, automobileoriented cities, like Phoenix.However, over half the American population lives in suburbs, with the rest split between urban and rural areas; a settlement pattern that reveals the scale of US urban decentralization (US Census Bureau, 2000). These decentralized development patterns also have clear racial and class imprints, white flight to the suburbs and the blackening of inner-cities, as illustrated by Metropolitan Detroit (Darden et al., 1987). Since the early-1970s, the majority of the US population living in metropolitan areas lived in suburbs, and this majority was overwhelmingly white. While the suburbs remain predominantly white, the 2010 Census has shown growing racial and ethnic diversity. In Metro Detroit, however, the racial divide has intensified. Some 83% of the city of Detroit population is black (US Census Bureau, 2011). In exploring the complexity of the inter- and intra-generational equity requirements for advancing toward sustainability, we analyze one particular aspect of intra-generational equity; the role of discrimination – racial and class – in distorting urban form and in generating resource inefficient human activities. Racial and class conflicts shape urban form as one population sub-group, largely white and upper-income, attempts to distance itself from another sub-group that is largely black, lower income, and considered a threat. The result is excessive suburbanization, as whites seek homogenous urban environments and use space to increase the distance between themselves and blacks, a decentralization process known aswhite flight (Figs. 1–2). The resulting low-density and scattered developments facilitate excessive degradation of natural ecological systems and reduce regional economic performance and the overallwelfare of cities. This article focuses on the role of racism, a variable seldom considered in the sustainability discourse, in distorting housingmarkets and urban form, suppressing advancement toward urban sustainability. The analysis shows that racial and class discrimination contribute to ecological degradation, an underrepresented discussion in the sustainability debate. It also reveals that socially equitable, resource efficient, and environmentally benign outcomes can be achieved simultaneously, stressing the importance of pursuing urban sustainability. After exploring the decentralization of Metropolitan Detroit, we will examine the complex dimensions – natural environmental, built, and socio-economic – of racial and class driven urban processes that hinder sustainability.1 The study reinforces the inherent coupling between inter- and intra-generational equities by illustrating that by not pursuing intra-generational equity, in this context resolving racial and class conflicts, communities encourage resource inefficiency and environmental degradation, hindering inter-generational equity and the pursuit of sustainability.

Detroit's suburbanization has been driven by technological innovations, reduced energy prices, increased incomes, consumer preferences, and policy. Racial and class conflicts in the region – accommodated by municipal fragmentation and minimal interjurisdictional cooperation – have also accelerated suburbanization. The decaying core, however, has facilitated a decline in the competitiveness of the region. Like a perfect storm, the combination of variables facilitating suburbanization has produced a unique regional structure, with extreme decentralization and inner-city decline, facilitating a highly resource-inefficient urban form. Low-density suburbanization is generally explained as a rational outcome of market forces, shaped by consumer preferences (Bowman and Thompson, 2009; Gordon and Richardson, 1997). While preferences inevitably do shape citybuilding processes, discrimination in the housing market remains critical in driving urban decentralization, resource consumption, and ecosystem degradation. Despite its significance, discrimination as a variable facilitating resource-use and environmental degradation is seldom discussed in the sustainability or wider ecology literature. Excessive suburbanization, driven by racial and socio-economic conflicts, exacerbates both socio-economic and environmental pressures. This inherent coupling between social and environmental processes reinforces the pursuit of equity among existing generations – including addressing discrimination and oppression – as a pre-condition for achieving equity between generations and promoting sustainability. Within this context, the article advances an approach for defining sustainability policies. Since sustainability initiatives focus on the coupling of socio-economic and environmental processes, they need to simultaneously promote intra- and inter-generational equities, that is, advance both equity and efficiency. For instance, limiting state finances that favor infrastructure investment in newer suburbs at the expense of older cities would curtail suburbanization and resourceuse, while also ending infrastructure financing disproportionately favoring upper-income groups. Similarly,more compact developments, by using less land and infrastructure, could reduce house prices – if developers pass some cost-savings to homebuyers – facilitating more affordable housing and less resource-use. In a context where little is known about the mechanisms for designing sustainability policies, this is a legitimate starting-point, pursuing policies that simultaneously promote intra- and inter-generational equities. The US experience shows that depending on political interest, local and state governments have taken different positions on suburbanization. Some regions have been active in curtailing inefficient decentralization, while other local and state governments have little interest in such policies. In Michigan, it is perhaps the extreme racial and class conflicts that have limited policies curtailing suburbanization. If the Detroit region does pursue greater compactness and urban revitalization, it must be understood that due to the supra-durable nature of urban form, any change in the built environment will be a long-term process. It took over six decades to produce this dispersed metropolis, and it will likely take longer to produce a more compact region. In Detroit, an important issuewill also be the integration of any new population with the existing black community. Recently, cities across America have been celebrating a new urban renaissance. Detroit has also been attempting to engage in such revival efforts. A consistent theme with these revival initiatives has been the esthetic necessary to attract wealthier populations back into the city. Celebrated projects in Detroit, such as the Merchant Row Lofts, are similarly marketed to upper-income groups. In this celebration of urban, however, there has been little interest focused on marginalized populations (Podagrosi and Vojnovic, 2008; Podagrosi et al., 2011). The poor and minorities are not part of this new urban celebration. If the rebuilding of Detroit is achieved by merely removing the poor and minorities from one neighborhood and concentrating them in another, these initiatives will do nothing to advance sustainability. Ultimately, the Detroit region needs a paradigmshift fromracial and class conflicts to racial and class cooperation. In addition, addressing social and racial inequities and pursuing regional compactness will not enable Detroit to achieve sustainability. This will simply be a step to alleviate critical socio-economic and environmental stresses in the region. It will enable advancement toward sustainability by generating non-trivial improvements in social welfare and environmental wellbeing. Socio-economic and environmental advantages would be realized if Detroit could achieve a profile (in terms of land, energy, and material use) similar to its neighbor Chicago. However, without the pursuit of basic intra-generational equity – committing to racially and socially just societies – inter-generational inequities, and excessive ecological degradation, will persist and the Detroit region will continue to move away from the sustainability condition.