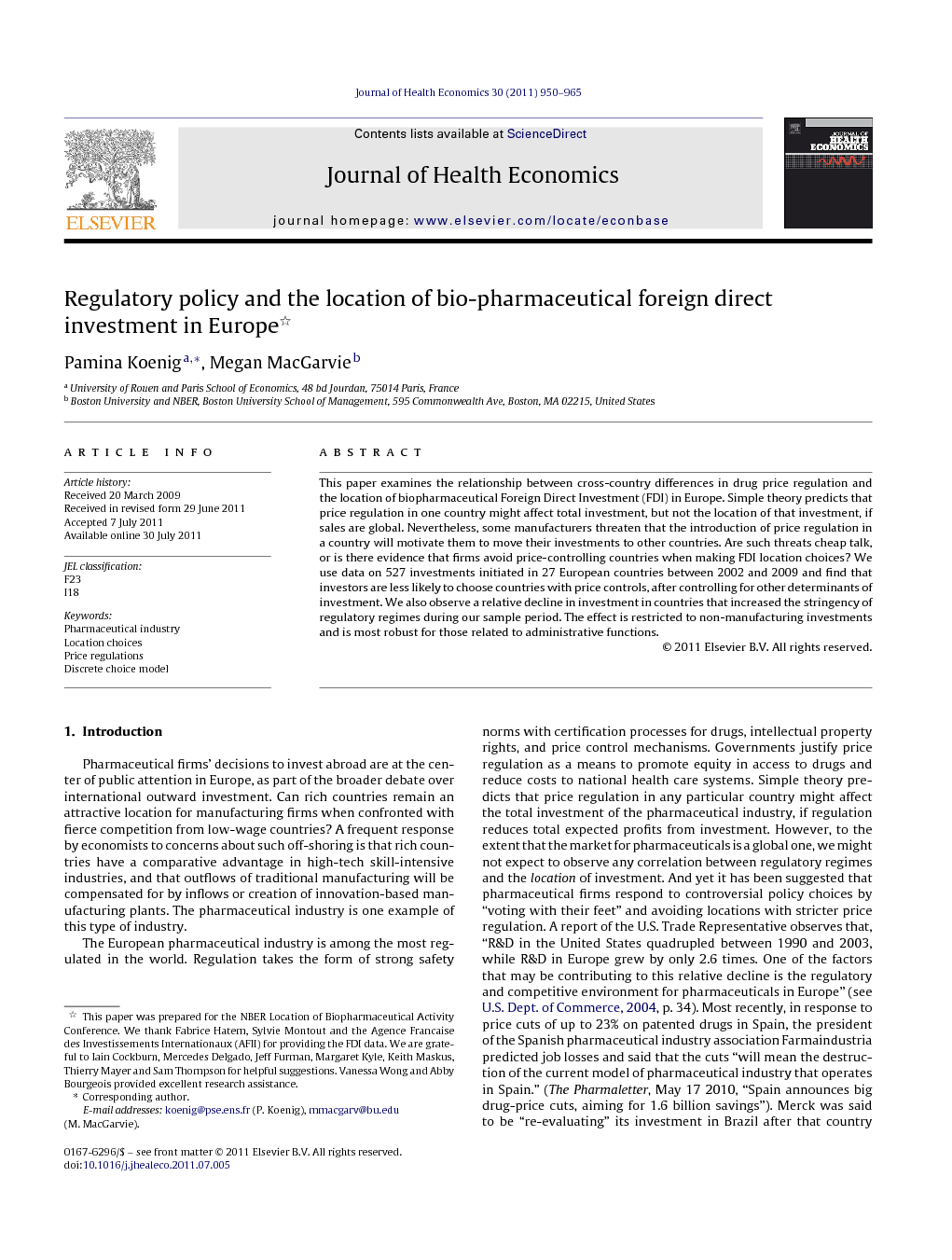 This paper examines the relationship between cross-country differences in drug price regulation and the location of biopharmaceutical Foreign Direct Investment (FDI) in Europe. Simple theory predicts that price regulation in one country might affect total investment, but not the location of that investment, if sales are global. Nevertheless, some manufacturers threaten that the introduction of price regulation in a country will motivate them to move their investments to other countries. Are such threats cheap talk, or is there evidence that firms avoid price-controlling countries when making FDI location choices? We use data on 527 investments initiated in 27 European countries between 2002 and 2009 and find that investors are less likely to choose countries with price controls, after controlling for other determinants of investment. We also observe a relative decline in investment in countries that increased the stringency of regulatory regimes during our sample period. The effect is restricted to non-manufacturing investments and is most robust for those related to administrative functions.

Pharmaceutical firms’ decisions to invest abroad are at the center of public attention in Europe, as part of the broader debate over international outward investment. Can rich countries remain an attractive location for manufacturing firms when confronted with fierce competition from low-wage countries? A frequent response by economists to concerns about such off-shoring is that rich countries have a comparative advantage in high-tech skill-intensive industries, and that outflows of traditional manufacturing will be compensated for by inflows or creation of innovation-based manufacturing plants. The pharmaceutical industry is one example of this type of industry. The European pharmaceutical industry is among the most regulated in the world. Regulation takes the form of strong safety norms with certification processes for drugs, intellectual property rights, and price control mechanisms. Governments justify price regulation as a means to promote equity in access to drugs and reduce costs to national health care systems. Simple theory predicts that price regulation in any particular country might affect the total investment of the pharmaceutical industry, if regulation reduces total expected profits from investment. However, to the extent that the market for pharmaceuticals is a global one, we might not expect to observe any correlation between regulatory regimes and the location of investment. And yet it has been suggested that pharmaceutical firms respond to controversial policy choices by “voting with their feet” and avoiding locations with stricter price regulation. A report of the U.S. Trade Representative observes that, “R&D in the United States quadrupled between 1990 and 2003, while R&D in Europe grew by only 2.6 times. One of the factors that may be contributing to this relative decline is the regulatory and competitive environment for pharmaceuticals in Europe” (see U.S. Dept. of Commerce, 2004, p. 34). Most recently, in response to price cuts of up to 23% on patented drugs in Spain, the president of the Spanish pharmaceutical industry association Farmaindustria predicted job losses and said that the cuts “will mean the destruction of the current model of pharmaceutical industry that operates in Spain.” (The Pharmaletter, May 17 2010, “Spain announces big drug-price cuts, aiming for 1.6 billion savings”). Merck was said to be “re-evaluating” its investment in Brazil after that country imposed compulsory licensing on efavirenz, Merck's anti-retroviral AIDS drug. (The Economist, May 10 2007, “Brazil's AIDS Program: A conflict of goals”). In response to reform proposals in Germany 2002, the Pharma Marketletter reported that the pharmaceutical company Merck KGaA “warned that the reforms could … influence where it locates a new 300-million euro biopharmaceuticals product plant, its largest-ever investment.” Die Welt reported on August 25, 2003 that “the American pharmaceutical firm Pfizer plans to reduce certain activities in Germany following upcoming reforms to the health system. Pfizer has decided to transfer an R&D group from Freiburg, Germany to the United Kingdom. 150 jobs will be affected by this decision.” There is also evidence that drug launches are delayed in countries with more stringent price regulations ( Danzon et al., 2004, Kyle, 2006 and Kyle, 2007a). In this paper, we investigate the determinants of the locations of foreign investments in the biopharmaceutical sector in 27 European countries between 2002 and 2009. We investigate whether variation in policy regimes across countries helps explain variation in the locations of foreign investments in the pharmaceutical sector. We present the first evidence of the impact of regulatory constraints on the location choice of affiliates by multinational pharmaceutical firms. Our empirical results suggest that manufacturing investments are not associated with regulatory policy. Non-manufacturing investments in Western Europe are negatively associated with the strength of price regulation in a given country. However, these findings appear to be driven in large part by a decline in investments related to administrative functions. The rest of the paper is structured as follows. Section 2 describes the regulatory policy schemes in the pharmaceutical industry in Europe and sketches the theoretical framework. Section 3 presents the empirical strategy to estimate the effect of regulatory policy on the location choices of pharmaceutical firms. In Section 4 we present the investment data, Section 5 explains the results and Section 6 concludes.

This paper examines the relationship between cross-country differences in drug price regulation and the location of biopharmaceutical FDI in Europe. We use data on 527 investments initiated in 27 European countries between 2002 and 2009 to estimate whether biopharmaceutical companies are influenced by the stringency of price regulations in choosing the countries in which to locate new investments. We find that countries with price controls receive fewer new non-manufacturing investments, after controlling for other determinants of investment. Countries that increased the stringency of price regulation during the sample period were relatively less likely to receive an investment after the policy went into effect. However, these effects vary across type of investment, with the most robust negative effect observed for administrative investments, only weakly significant effects for R&D, and no effect for manufacturing investments.