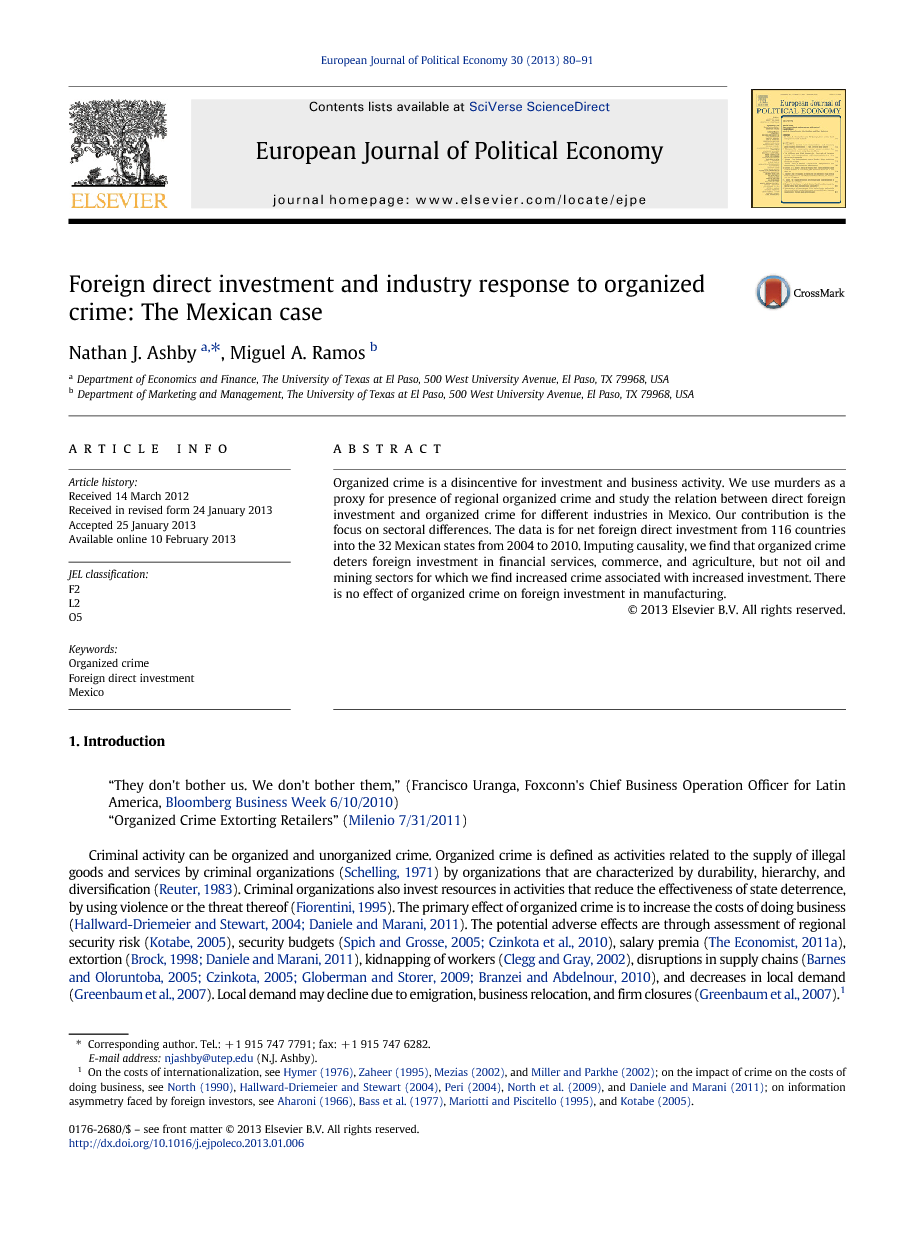 Criminal activity can be organized and unorganized crime. Organized crime is defined as activities related to the supply of illegal goods and services by criminal organizations (Schelling, 1971) by organizations that are characterized by durability, hierarchy, and diversification (Reuter, 1983). Criminal organizations also invest resources in activities that reduce the effectiveness of state deterrence, by using violence or the threat thereof (Fiorentini, 1995). The primary effect of organized crime is to increase the costs of doing business (Hallward-Driemeier and Stewart, 2004 and Daniele and Marani, 2011). The potential adverse effects are through assessment of regional security risk (Kotabe, 2005), security budgets (Spich and Grosse, 2005 and Czinkota et al., 2010), salary premia (The Economist, 2011a), extortion (Brock, 1998 and Daniele and Marani, 2011), kidnapping of workers (Clegg and Gray, 2002), disruptions in supply chains (Barnes and Oloruntoba, 2005, Czinkota, 2005, Globerman and Storer, 2009 and Branzei and Abdelnour, 2010), and decreases in local demand (Greenbaum et al., 2007). Local demand may decline due to emigration, business relocation, and firm closures (Greenbaum et al., 2007).1 The hazards indicate a negative effect of organized crime on foreign investment. Empirical evidence, albeit scarce, supports this conclusion. Brock (1998) finds relatively higher FDI in regions of Russia where the level of crime is lower. Madrazo Rojas (2009) finds empirical evidence of a negative association between violent organized crime and foreign direct investment (FDI) in Mexican states. Daniele and Marani (2011) find support for a negative relationship between total regional crime and FDI in Italy. The contribution of our study is to investigate industry response to organized crime using data from Mexico. We find diversity across industries, with organized crime deterring foreign investment in financial services, commerce, and agriculture but not oil and mining sectors for which we find increased crime associated with increased investment. There is no effect of organized crime on foreign investment in manufacturing.

Our study has contributed to the evidence on organized crime and FDI by studying diversity in effects across sectors. We have found a negative association between crime and FDI in ‘Agriculture, Livestock, Hunting, Forestry and Fishing’ and in ‘Financial, Management, and Real State Services’, ‘Commerce’ and ‘Transportation and Communication’ sectors. We find no association between organized crime and investment in manufacturing, the largest sector. There is a positive association between crime and FDI in ‘Mining and Oil Extraction’. Our study contributes to the literature on the effects of variation in institutional environments on FDI (e.g. Egger and Winner, 2005; Cuervo-Cazurra, 2006; Busse and Hefeker, 2007; Barassi and Zhou, 2012; Aleksynska and Havrylchyk, 2013). Specifically, by finding that the relationship between organized crime and FDI varies across industries, we provide more detail than in previous research (e.g. Daniele and Marani, 2011). Our analysis has limitations inherent to the nature of the data and the phenomenon. First, we cannot control for firm-specific experience in operating in high-crime regions as we lack firm-level investment data due to Mexico's FDI disclosure laws. Second, measuring organized crime is challenging.We have resorted to use of the measure of reported homicides, which we believe is the most accurate based on the empirical context. Because FDI data in Mexico are only disclosed at the state level, we are unable to test the robustness of our results using a different geographic unit of analysis such as cities or metropolitan areas.