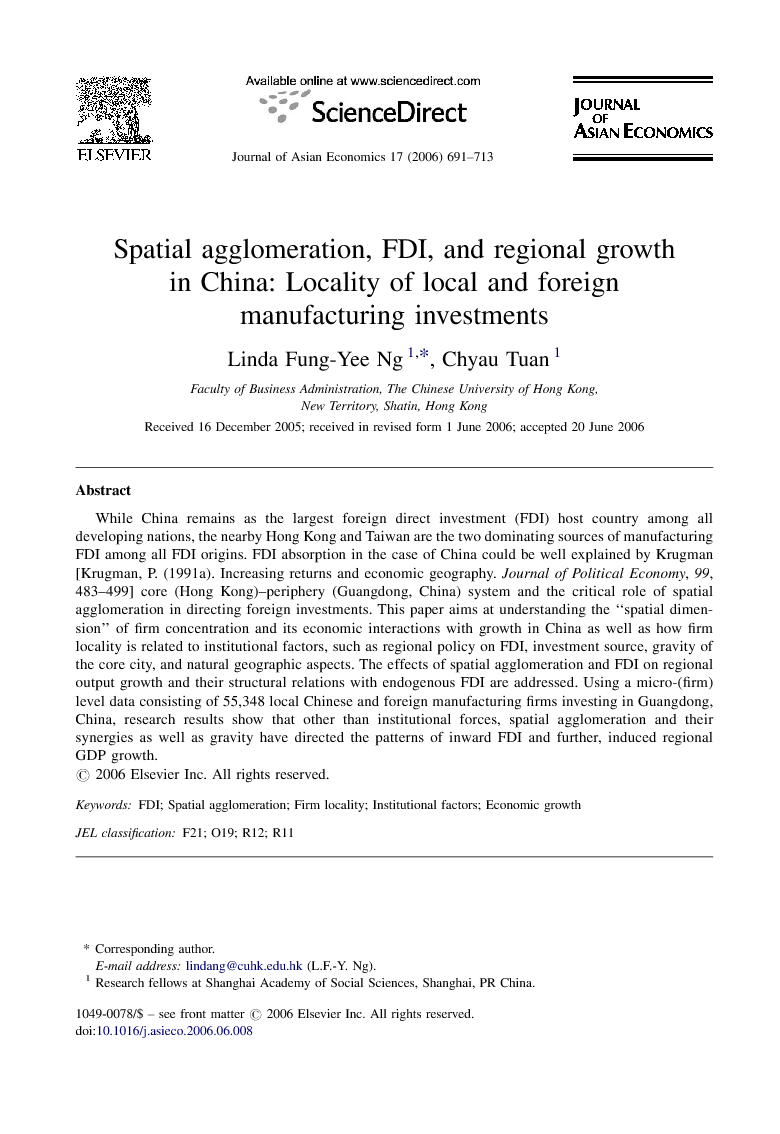 While China remains as the largest foreign direct investment (FDI) host country among all developing nations, the nearby Hong Kong and Taiwan are the two dominating sources of manufacturing FDI among all FDI origins. FDI absorption in the case of China could be well explained by Krugman [Krugman, P. (1991a). Increasing returns and economic geography. Journal of Political Economy, 99, 483–499] core (Hong Kong)–periphery (Guangdong, China) system and the critical role of spatial agglomeration in directing foreign investments. This paper aims at understanding the “spatial dimension” of firm concentration and its economic interactions with growth in China as well as how firm locality is related to institutional factors, such as regional policy on FDI, investment source, gravity of the core city, and natural geographic aspects. The effects of spatial agglomeration and FDI on regional output growth and their structural relations with endogenous FDI are addressed. Using a micro-(firm) level data consisting of 55,348 local Chinese and foreign manufacturing firms investing in Guangdong, China, research results show that other than institutional forces, spatial agglomeration and their synergies as well as gravity have directed the patterns of inward FDI and further, induced regional GDP growth.

After China's accession to WTO, China remains hosting the largest share of foreign direct investment (FDI) receipts and has also become the top FDI destination among all developing countries. Among various sources of FDI flowing into China, the two nearby overseas Asian Chinese economies, Hong Kong and Taiwan, have represented the two largest FDI sources to be followed by USA and other OECD countries. After China's economic reform in 1979 and her implementations of the preferential FDI policies in Guangdong, other coastal regions in China were further opened up stepwise to receive FDI via carefully designed FDI promotion policies.1 Guangdong which contains three of the four Special Economic Zones (SEZs) and the Pearl River Delta region (PRD) has been able to attract ample inward FDI from other Asian economies, especially from the nearby Hong Kong and Taiwan. It remained as the largest FDI recipient sharing at least one-third of the national total FDI as of 2000 and more than a quarter (25.7%) of the total in 2003.2 Both PRD in Guangdong in southern China and Yangtze River Delta region (YRD) in eastern China represented only 1.4% (or 4% at the provincial level) of the total area in China were, respectively, recorded to account for, 26.27 and 26.05%, on an average, of the total national FDI receipts, or in sum, more than one-half of the national total FDI during the period of 1985–2003. The continuous huge influx of manufacturing FDI during the past two decades has made PRD in Guangdong distinctively known as the “world's largest manufacturing base”. The dominance of the inward FDI in Guangdong by Hong Kong and Taiwan, despite of the vigorous competition arising from other regions in China and with the rapid rise of YRD, in particular,3 posted a significant question: “why has this region (PRD) in China, other than being FDI preferential policy-led, been able to attract and mobilize continuously the largest share of inward FDI and particularly from these two overseas Chinese economies?” This paper aims at investigating the critical roles of spatial agglomeration that have directed the FDI patterns in China with particular reference to manufacturing in Guangdong and based on Krugman's (1991a) view of core–periphery (CP) system. Until recently, very limited efforts have been devoted to study how spatial agglomeration, FDI, and regional output growth are related and how these effects would interact. In this paper, theoretical perspectives regarding the critical roles of spatial agglomeration (that is, the “critical masses” phenomenon) in terms of firms’ physical location and especially that of foreign firms and the implications of such localities on regional growth were reviewed. The research objectives of this paper examine: (1) the locality effects of manufacturing firms including firm spatial agglomerations particularly on the impacts of institutional (FDI-led policy) characteristics; (2) the role and gravity effect of the center core; and (3) the natural geographic effects in directing FDI flow patterns. Furthermore, the postulated structural relations of manufacturing spatial agglomeration in attracting international inward investment (FDI) and inducing (regional) output growth were tested. Empirical investigations using micro-(firm) level data of 55,348 local and foreign firms operating in China were performed.

The research results seemingly support the postulated hypotheses regarding firm investment behaviors (both local and foreign) with specific reference to their location decisions and spatial concentration patterns as well as spatial agglomeration effect on FDI and regional GDP growth in China. The major research findings are summarized as follows: 1. The spatial concentration patterns of both local Chinese and foreign investment were directed by institutional characteristics. Highly diverse FDI patterns were found in the form of concentrations mainly in the FDI-policy regions at SEZs/PRD and especially at PR-east. Although local Chinese manufacturing firms were less diverse in concentration, they shared the common preferential locality behavior by concentrating in PRD and PR-east. 2. Both spatial agglomeration and strategic interaction (synergy) between local and foreign firms were critical to attract FDI, and hence firms’ location decisions. 3. Spatial agglomerations had not only strongly affected FDI absorption and its growth, the same effect is true on GDP. Furthermore, local manufacturing agglomerations had created much higher industry (forward) linkages than that of foreign firms. 4. The simultaneous structural relations of spatial agglomerations, FDI, and GDP demonstrated that spatial agglomerations had directly affected FDI flows and regional GDP growth via FDI after controlling for the effects of strategic interactions and friction. Manufacturing agglomerations of local firms was more important in affecting directly GDP while that of foreign firms in FDI. 5. Reducing the frictional distance of an investment destination from the center core was essential to promoting FDI and output growth in the (core–periphery) region. Bearing the above research findings in mind, the behavior of the inward FDI in China and its significant impacts on output growth from a regional perspective can be clearly deduced. 1. Given the critical roles of spatial agglomerations and the synergy effects arising from the strategic interactions (such as from demonstration effects, supporting networks, information sharing, etc.) between local and foreign firms, manufacturing investments would incline to capitalize on this advantage of agglomeration economies via their choice of investment destinations. That is, PRD, the “world's largest manufacturing base”, would continue to dominate as a prime investment site (Tuan & Ng, 2004b). However, the trade-off between the two regions, PR-east versus PR-west, or among the cities/counties in the region would much depend upon the transaction costs and agglomeration economies/diseconomies in production (Ng & Tuan, 2003; Tuan & Ng, 2004a). 2. With the absorption of FDI from a core–periphery perspective where Hong Kong serves as the center core and PRD/Guangdong as the manufacturing periphery (Tuan & Ng, 2003a), further inward FDI would continue to realize at those locations lying closer to the center core, in general, due to the gravity effect of a shorter distance and the agglomeration economies such generated.13 3. Along this line, the provision of better infrastructural supports, particularly by connecting PR-west with the center core, would direct more FDI inflows by the virtue of decreased transaction costs via reducing the travel distance and transportation time from the core in this metropolitan economy (Tuan & Ng, 2004a). The direction of inward FDI demonstrated in this study envisaged the crucial role of the structural (institutional) factors in FDI promotion. Building a better investment environment is essential for further FDI promotion in this regard (Ng & Tuan, 2002).14 4. FDI and FDI driven institutional reform made rapid growth in PRD during the 1980s and subsequently, YRD during the 1990s. The dynamic developments of both global delta economies demonstrate the strategic directions of economic growth in both regions. Such dynamism definitely would raise expectations especially on the part of international investment seeking for business opportunities. Hence, any further search of a more meaningful interpretation of economic growth in China should be focused along a regional perspective via FDI absorption. 5. After the WTO accession, China will have to abide with the WTO rules by opening up impartially to all FDI types. To leverage on the synergies of manufacturing spatial agglomerations and the economies such derived, the existing pattern of FDI inflows is expected to continue (Tuan & Ng, 2004b). Moreover, a more complete form of plant relocation to the peripheral areas in the core–periphery economy should be observed for those manufacturing industries (e.g., textiles and clothing) which quota restrictions would have been removed by then (Ng & Tuan, 2003). 6. Other than the potential change in structural factors arising from the WTO accession, the institutional factor on upgrading the image and credibility of the local governmental administration was recently listed as a new top national agenda.15 The “globalization process” of the epidemics (SARS outbreak in 2003) shocked China and its famous manufacturing base (PRD) in terms of both local economic activities and foreign investment. Such an episode reinforces the critical concerns of foreign investors regarding the institutional government feature as a political risk factor of investment (Ng & Tuan, 2001), which is especially true in developing economies. After carefully controlling for political risk and the possible detriments toward the economic and political performance of China, the year 2003 might have served as a critical turning point for the global economy in considering a new wave of FDI in China and particularly in the world's largest manufacturing base (PRD). China's huge domestic demand in an open market and its potential growth have also become critical determinants in directing the global economic activities and future FDI flows in both manufacturing and services in the region. With further improved and credible controls of some institutional factors, China's economic presence and emergence as a super-economic power in the today's mutually economic dependent global economy should also act as a new engine of future global economic growth. In any case, the results from this research reinforces the reflection that “spatial” dimension is essential in considering investment flows while “regional” perspective is critical in studying the dynamics of economic growth in a huge country like China.