عنوان انگلیسی
Impact of frequency of alignment of physical and information system inventories on out of stocks: A simulation study
دانلود فوری مقاله + سفارش ترجمه 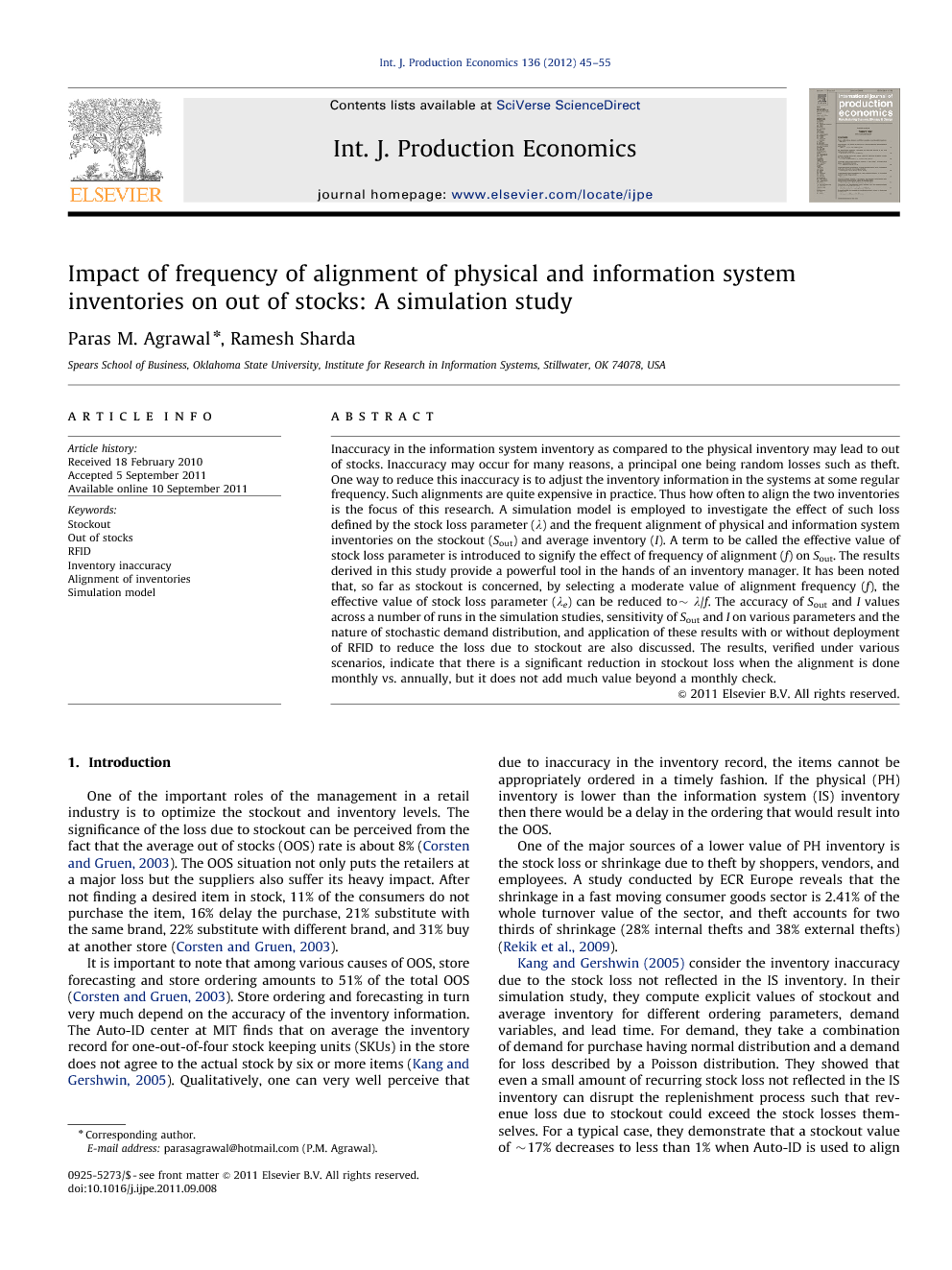 Inaccuracy in the information system inventory as compared to the physical inventory may lead to out of stocks. Inaccuracy may occur for many reasons, a principal one being random losses such as theft. One way to reduce this inaccuracy is to adjust the inventory information in the systems at some regular frequency. Such alignments are quite expensive in practice. Thus how often to align the two inventories is the focus of this research. A simulation model is employed to investigate the effect of such loss defined by the stock loss parameter (λ) and the frequent alignment of physical and information system inventories on the stockout (Sout) and average inventory (I). A term to be called the effective value of stock loss parameter is introduced to signify the effect of frequency of alignment (f) on Sout. The results derived in this study provide a powerful tool in the hands of an inventory manager. It has been noted that, so far as stockout is concerned, by selecting a moderate value of alignment frequency (f), the effective value of stock loss parameter (λe) can be reduced to∼ λ/f. The accuracy of Sout and I values across a number of runs in the simulation studies, sensitivity of Sout and I on various parameters and the nature of stochastic demand distribution, and application of these results with or without deployment of RFID to reduce the loss due to stockout are also discussed. The results, verified under various scenarios, indicate that there is a significant reduction in stockout loss when the alignment is done monthly vs. annually, but it does not add much value beyond a monthly check.

Inaccuracy in the IS inventory due to a recurring demand for loss such as theft leads to a high value of stockout. To minimize the stockout, a simulation model has been explored to investigate the effect of frequent alignment of PH and IS inventories on the stockout (Sout) and average inventory (I). The normal distribution for the demand for purchase during each period, and the Poisson distribution for the demand for loss have been considered. With or without the help of RFID, the IS inventory is aligned with the PH inventory after every Nalign periods, i.e., with frequency f given by Eq. (1). Thus f=1 corresponds to a situation where no attempt has been made to correct the IS inventory during the total operation time. Dependence of Sout on f shows a rapid decrease in Sout with f. In a typical case, Sout drops from 33.2% for f=1 to 0.23% for f=12. The average inventory (I) is found to increase with the decrease in Sout. A term to be called as the effective value of stock loss parameter, λe(f), has been defined to signify the effect of f on Sout. Under the condition given by Eq. (16), the effective value of stock loss parameter λe(f) is found to satisfy Eq. (14). To realize the significance of Eq. (14), we can take one numerical example: according to Eq. (14) the stockout value Sout in a retail store for which f=12 and shrinkage rate=3% would be equal to that for which f=1 and shrinkage rate is 0.25% . The validity of Eq. (7b) and (14) has been tested for a large number of cases over a wide range of parameters. The rationale behind the validity of this equation has also been discussed. Limitations of Eq. (14), accuracy of Sout and I values on the number of runs nrun, and sensitivity of Sout and I on various parameters and the nature of stochastic demand distribution have also been explored in this investigation. With the deployment of RFID, it becomes easy to align PH and IS inventories. However, the cost of such alignment increases with the increase in f. Therefore, a knowledge of optimum value of f becomes helpful in saving the cost. On the one hand by using RFID, we can easily increase f to achieve a reduction in the value of stockout, and on the other hand we would like to optimize the value of f to control the cost of frequent aligning the PH and IS inventories. In this regard, Eq. (14) and the related discussion presented in this studies would be useful to an inventory manager.