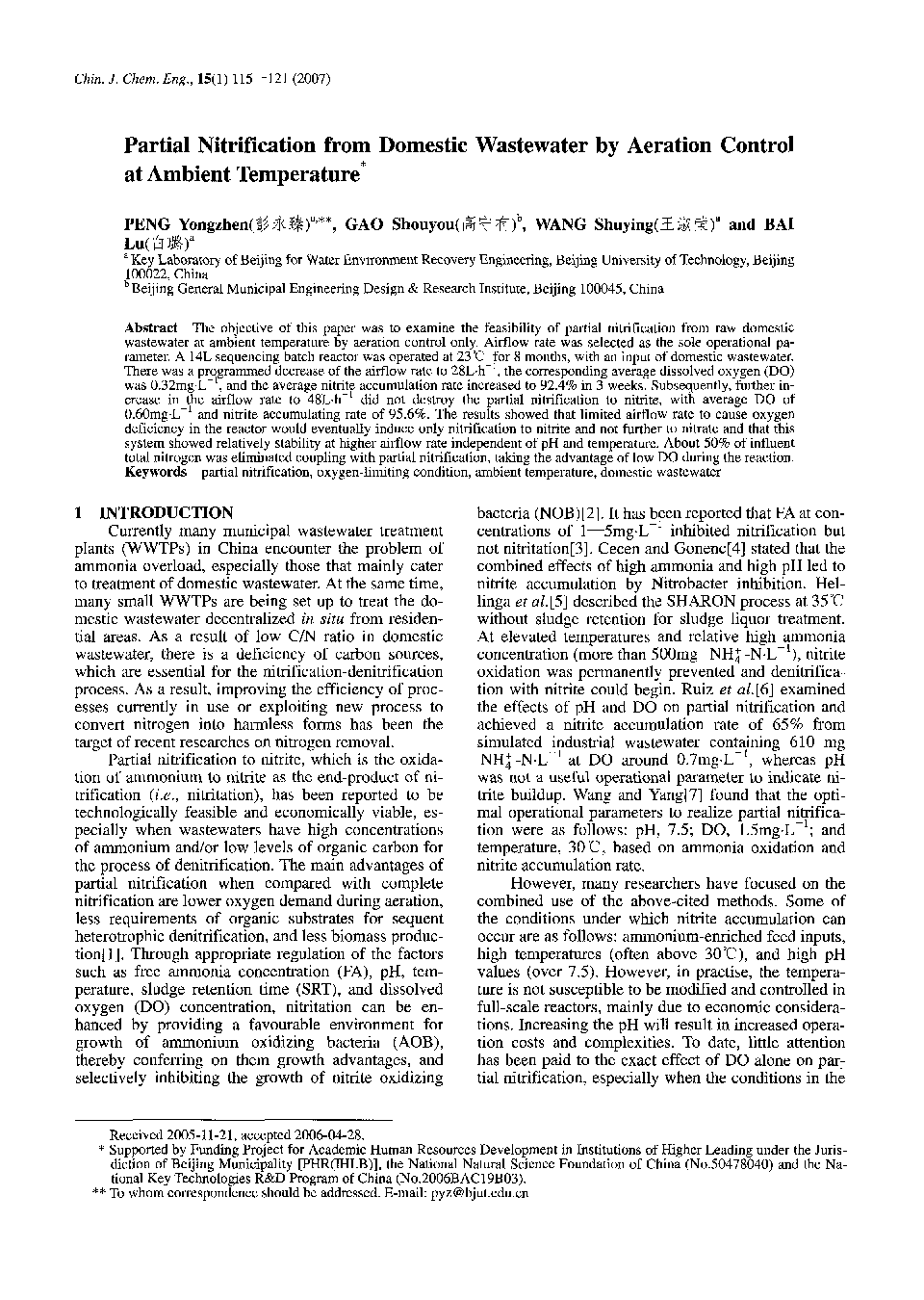 The objective of this paper was to examine the feasibility of partial nitrification from raw domestic wastewater at ambient temperature by aeration control only. Airflow rate was selected as the sole operational parameter. A 14L sequencing batch reactor was operated at 23°C for 8 months, with an input of domestic wastewater. There was a programmed decrease of the airflow rate to 28L·h−1, the corresponding average dissolved oxygen (DO) was 0.32mg·L−1, and the average nitrite accumulation rate increased to 92.4% in 3 weeks. Subsequently, further increase in the airflow rate to 48L·h−1 did not destroy the partial nitrification to nitrite, with average DO of 0.60mg·L−1 and nitrite accumulating rate of 95.6%. The results showed that limited airflow rate to cause oxygen deficiency in the reactor would eventually induce only nitrification to nitrite and not further to nitrate and that this system showed relatively stability at higher airflow rate independent of pH and temperature. About 50% of influent total nitrogen was eliminated coupling with partial nitrification, taking the advantage of low DO during the reaction.

Currently many municipal wastewater treatment plants (WWTPs) in China encounter the problem of ammonia overload, especially those that mainly cater to treatment of domestic wastewater. At the same time, many small WWTPs are being set up to treat the domestic wastewater decentralized in situ from residential areas. As a result of low C/N ratio in domestic wastewater, there is a deficiency of carbon sources, which are essential for the nitrification-denitrification process. As a result, improving the efficiency of processes currently in use or exploiting new process to convert nitrogen into harmless forms has been the target of recent researches on nitrogen removal. Partial nitrification to nitrite, whch is the oxidation of ammonium to nitrite as the end-product of nitrification (ix., nitritation), has been reported to be technologically feasible and economically viable, especially when wastewaters have high concentrations of ammonium and/or low levels of organic carbon for the process of denitrification. The main advantages of partial nitrification when compared with complete nitrification are lower oxygen demand during aeration, less requirements of organic substrates for sequent heterotrophic denitrification, and less biomass production[ 13. Through appropriate regulation of the factors such as free ammonia concentration (FA), pH, temperature, sludge retention time (SRT), and dissolved oxygen (DO) concentration, nitritation can be enhanced by providing a favourable environment for growth of ammonium oxidizing bacteria (AOB), thereby conferring on them growth advantages, and selectively inhibiting the growth of nitrite oxidizing bacteria (NOB)[2]. It has been reported that FA at concentrations of 1-5mg.L- inhibited nitrification but not nitritation[3]. Cecen and Gonenc[4] stated that the combined effects of high ammonia and high pH led to nitrite accumulation by Nitrobacter inhibition. Hellinga et aZ.[5] described the SHARON process at 35% without sludge retention for sludge liquor treatment. At elevated temperatures and relative high ammonia concentration (more than 500mg NH,+ -N.L-'), nitrite oxidation was permanently prevented and denitrification with nitrite could begin. Ruiz et a1.[6] examined the effects of pH and DO on partial nitrification and achieved a nitrite accumulation rate of 65% from simulated industrial wastewater containing 6 10 mg NH,+ -N.L-' at DO around O.7mg.L-', whereas pH was not a useful operational parameter to indicate nitrite buildup. Wang and Yang[7] found that the optimal operational parameters to realize partial nitrification were as follows: pH, 7.5; DO, 1.5mg.L-'; and temperature, 30"C, based on ammonia oxidation and nitrite accumulation rate. However, many researchers have focused on the combined use of the above-cited methods. Some of the conditions under which nitrite accumulation can occur are as follows: ammonium-enriched feed inputs, high temperatures (often above 30°C), and high pH values (over 7.5). However, in practise, the temperature is not susceptible to be modified and controlled in full-scale reactors, mainly due to economic considerations. Increasing the pH will result in increased operation costs and complexities. To date, little attention has been paid to the exact effect of DO alone on parr tial nitrification, especially when the conditions in the

A practical method to achieve partial nitrification to nitrite from raw domestic wastewater under conditions where oxygen was limited was developed in this study, and it was a pH-independent process under ambient temperature. Airflow rate was the only parameterthat needed to be controlled. It was argued that there existed a boundary value of DO concentration that was necessary to realize nitritation. Sufficient operation cycles were needed to accomplish full inhibition of nitrification to nitrate. The fact that it is of relatively rigorous condition for NOB to revive in the system made it possible to operate this nitrification process with nitrite accumulation under higher DO level, as compared with that of inducing the inhibitory conditions. Using data that were detected online for DO, pH, and OW, the end of nitritation could be identified through the distinctive points. Simultaneous nitrogen removal was acheved under low-DO operation. This strategy to achieve partial nitrification may lead to considerable savings of aeration cost in the nitrification phase; furthermore, less carbon dosage is needed in the subsequent denitrification phase for nitrification to nitrate is prevented. Ths study further promotes the study and application of the partial nitrification/ denitrification process for domestic wastewater treatment. On the basis of the above results, a pilot- scale SBR with working volume of 50 cubic metres has been set up in the Beixiao River municipal WWTP in Beijing, to conduct further experiments.