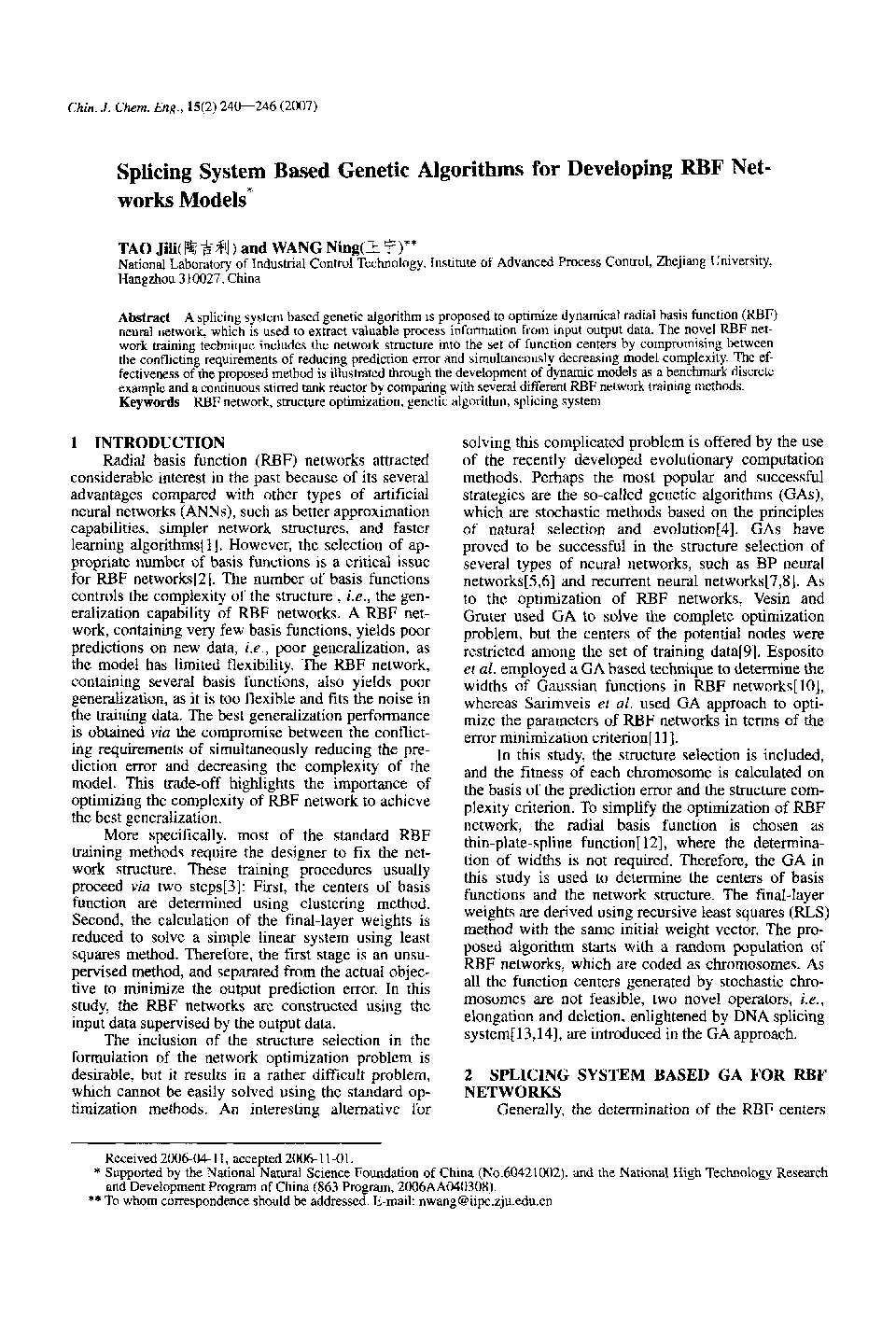 A splicing system based genetic algorithm is proposed to optimize dynamical radial basis function (RBF) neural network, which is used to extract valuable process information from input output data. The novel RBF network training technique includes the network structure into the set of function centers by compromising between the conflicting requirements of reducing prediction error and simultaneously decreasing model complexity. The effectiveness of the proposed method is illustrated through the development of dynamic models as a benchmark discrete example and a continuous stirred tank reactor by comparing with several different RBF network training methods.

Radial basis function (RBF) networks attracted considerable interest in the past because of its several advantages compared with other types of artificial neural networks (ANNs), such as better approximation capabilities, simpler network structures, and faster learning algorithms[l]. However, the selection of appropriate number of basis functions is a critical issue for RBF networks[2]. The number of basis functions controls the complexity of the structure , is., the generalization capability of RBF networks. A IU3F network, containing very few basis functions, yields poor predictions on new data, i.e., poor generalization, as the model has limited flexibility. The RBF network, containing several basis functions, also yields poor generalization, as it is too flexible and fits the noise in the training data. The best generalization performance is obtained via the compromise between the conflicting requirements of simultaneously reducing the prediction error and decreasing the complexity of the model. This trade-off highlights the importance of optimizing the complexity of RBF network to achieve the best generalization. More specifically, most of the standard RBF training methods require the designer to fix the network structure. These training procedures usually proceed via two steps[3]: First, the centers of basis function are determined using clustering method. Second, the calculation of the final-layer weights is reduced to solve a simple linear system using least squares method. Therefore, the first stage is an unsupervised method, and separated from the actual objective to minimize the output prediction error. In this study, the RBF networks are constructed using the input data supervised by the output data. The inclusion of the structure selection in the formulation of the network optimization problem is desirable, but it results in a rather difficult problem, which cannot be easily solved using the standard optimization methods. An interesting alternative forsolving this complicated problem is offered by the use of the recently developed evolutionary computation methods. Perhaps the most popular and successful strategies are the so-called genetic algorithms (GAS), which are stochastic methods based on the principles of natural selection and evolution[4]. GAS have proved to be successful in the structure selection of several types of neural networks, such as BP neural networks[5,6] and recurrent neural networks[7,8]. As to the optimization of RBF networks, Vesin and Gruter used GA to solve the complete optimization problem, but the centers of the potential nodes were restricted among the set of training data[9]. Esposito et al. employed a GA based technique to determine the widths of Gaussian functions in RBF networks[lO], whereas Sarimveis et al. used GA approach to optimize the parameters of RBF networks in terms of the error minimization criterion[ 113. In this study, the structure selection is included, and the fitness of each chromosome is calculated on the basis of the prediction error and the structure complexity criterion. To simplify the optimization of RBF network, the radial basis function is chosen as thin-plate-spline function[ 121, where the detennination of widths is not required. Therefore, the GA in this study is used to determine the centers of basis functions and the network structure. The final-layer weights are derived using recursive least squares (RLS) method with the same initial weight vector. The proposed algorithm starts with a random population of RBF networks, which are coded as chromosomes. As all the function centers generated by stochastic chromosomes are not feasible, two novel operators, i.e., elongation and deletion, enlightened by DNA splicing system[13,14], are introduced in the GA approach.

This article presents a splicing system based GA for the optimization of both structure and centers of the RBF network model. This algorithm is based oninput-output data, and its objective function considers both approximation capability and generalization performance of the RBF network. In this manner. the network simultaneously retains a reasonable size and effectively describes thc whole system. Different simulations of benchmark problem and typical nonlinear dynamic CSTR system are performed to illustrate the effectiveness of thc proposed method. The results show that this method can produce highly accurate prediction and keep a relatively simple network structure.