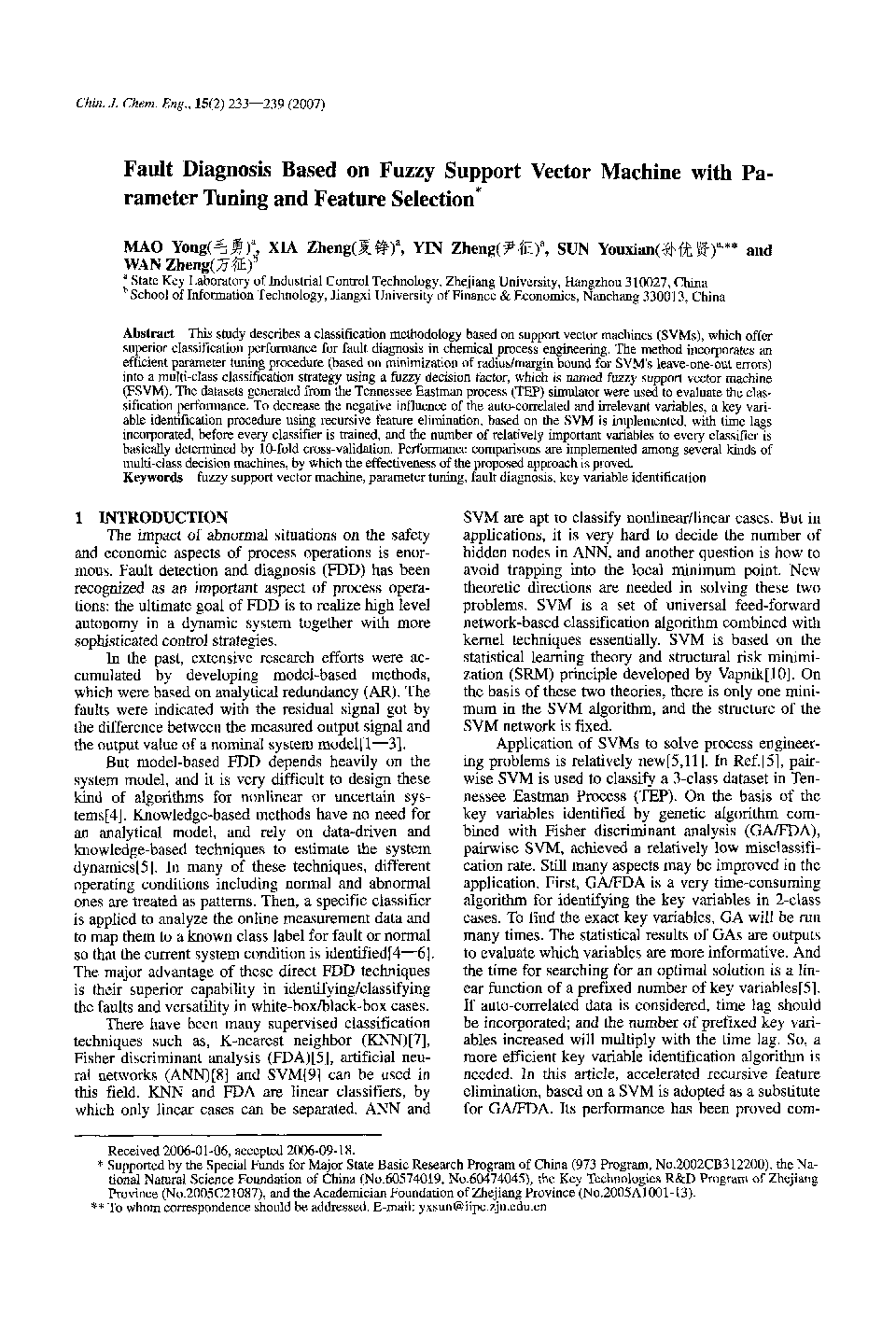 This study describes a classification methodology based on support vector machines (SVMs), which offer superior classification performance for fault diagnosis in chemical process engineering. The method incorporates an efficient parameter tuning procedure (based on minimization of radius/margin bound for SVM's leave-one-out errors) into a multi-class classification strategy using a fuzzy decision factor, which is named fuzzy support vector machine (FSVM). The datasets generated from the Tennessee Eastman process (TEP) simulator were used to evaluate the classification performance. To decrease the negative influence of the auto-correlated and irrelevant variables, a key variable identification procedure using recursive feature elimination, based on the SVM is implemented, with time lags incorporated, before every classifier is trained, and the number of relatively important variables to every classifier is basically determined by 10-fold cross-validation. Performance comparisons are implemented among several kinds of multi-class decision machines, by which the effectiveness of the proposed approach is proved.

The impact of abnormal situations on the safety and economic aspects of process operations is enormous. Fault detection and diagnosis (FDD) has been recognized as an important aspect of process operations: the ultimate goal of FDD is to realize high level autonomy in a dynamic system together with more sophisticated control strategies. In the past, extensive research efforts were accumulated by developing model-based methods, which were based on analytical redundancy (AR). The faults were indicated with the residual signal got by the difference between the measured output signal and the output value of a nominal system model[ 1-31. But model-based FDD depends heavily on the system model, and it is very difficult to design these kind of algorithms for nonlinear or uncertain systems[ 4]. Knowledge-based methods have no need for an analytical model, and rely on data-driven and knowledge-based techniques to estimate the system dynamics[5]. In many of these techniques, different operating conditions including normal and abnormal ones are treated as patterns. Then, a specific classifier is applied to analyze the online measurement data and to map them to a known class label for fault or normal so that the current system condition is identified[4--6]. The major advantage of these direct FDD techniques is their superior capability in identifying/classifying the faults and versatility in white-boxhlack-box cases. There have been many supervised classification techniques such as, K-nearest neighbor (K")[7], Fisher discriminant analysis (FDA)[5], artificial neural networks (ANN)[8] and SVM[9] can be used in this field. K" and FDA are linear classifiers, by which only linear cases can be separated. ANN andSVM are apt to classify nonlineadlinear cases. But in applications, it is very hard to decide the number of hidden nodes in ANN, and another question is how to avoid trapping into the local minimum point. New theoretic directions are needed in solving these two problems. SVM is a set of universal feed-forward network-based classification algorithm combined with kernel techniques essentially. SVM is based on the statistical learning theory and structural risk minimization (SRM) principle developed by Vapnik[ lo]. On the basis of these two theories, there is only one minimum in the SVM algorithm, and the structure of the SVM network is fixed. Application of SVMs to solve process engineering problems is relatively new[5,11]. In Ref.[5], pairwise SVM is used to classify a 3-class dataset in Tennessee Eastman Process (TEP). On the basis of the key variables identified by genetic algorithm combined with Fisher discriminant analysis (GAFDA), painvise SVM, achieved a relatively low misclassification rate. Still many aspects may be improved in the application. First, G m A is a very time-consuming algorithm for identifying the key variables in 2-class cases. To find the exact key variables, GA will be run many times. The statistical results of GAS are outputs to evaluate which variables are more informative. And the time for searching for an optimal solution is a linear function of a prefixed number of key variables[5]. If auto-con-elated data is considered, time lag should be incorporated; and the number of prefixed key variables increased will multiply with the time lag. So, a more efficient key variable identification algorithm is needed. In this article, accelerated recursive feature elimination, based on a SVM is adopted as a substitute for GA/FDA. Its performance has been proved cam-parable with GAEDA in Ref.[11], and here the number of key variables is decided basically by 10-fold cross-validation. Secondly, pairwise and one versus all structural classifiers are discussed in Ref.[5]. But when utilizing these two structural classifiers, there are also unclassifiable regions. Here, a classifier named FSVM based on pairwise SVM classifier and fuzzy decision factor[l2-14] is used to make up this blind point. Thirdly, the trial and error procedure is used for tuning the SVM parameters in Ref.[5]; such an approach, apart from consuming enormous time may not really obtain the best possible performance. In this study, sequential quadratic programming (SQP) combined with radiudmargin bound of SVM leave-one-out errors are used for tuning the SVM parameters. In this article, a brief introduction to the methods used in this study is given, including accelerated recursive feature elimination by the SVM and FSVM, the description of an estimate of generalization of errors and how to tune SVM parameters by minimizing this estimate. Finally, these three methods are combined in a framework. The results obtained by considering a 5-class problem from TEP[15,16] is discussed, and conclusions are summarized.

This study describes a classification methodology based on SVMs, which offers superior classification performance for fault diagnosis in chemical process engineering. The method incorporates efficient parameter tuning procedures based on minimization of radiudmargin bound for SVM’s leave-one-out errors into the multi-class classification strategy, using the fuzzy decision factor. The datasets generated for the TEP simulator were used to evaluate the classification performance. To decrease the negative influence from the auto-correlated and irrelevant variables, a key variable identification procedure by recursive feature elimination, based on an SVM is implemented, with time lags incorporated before every classifier is trained, and the number of relatively important variables to every classifier is basically determined by 10-fold cross-validation. Performance comparisons are implemented among four kinds of multi-class decision machines, by which the effectiveness of the proposed approach is proved.