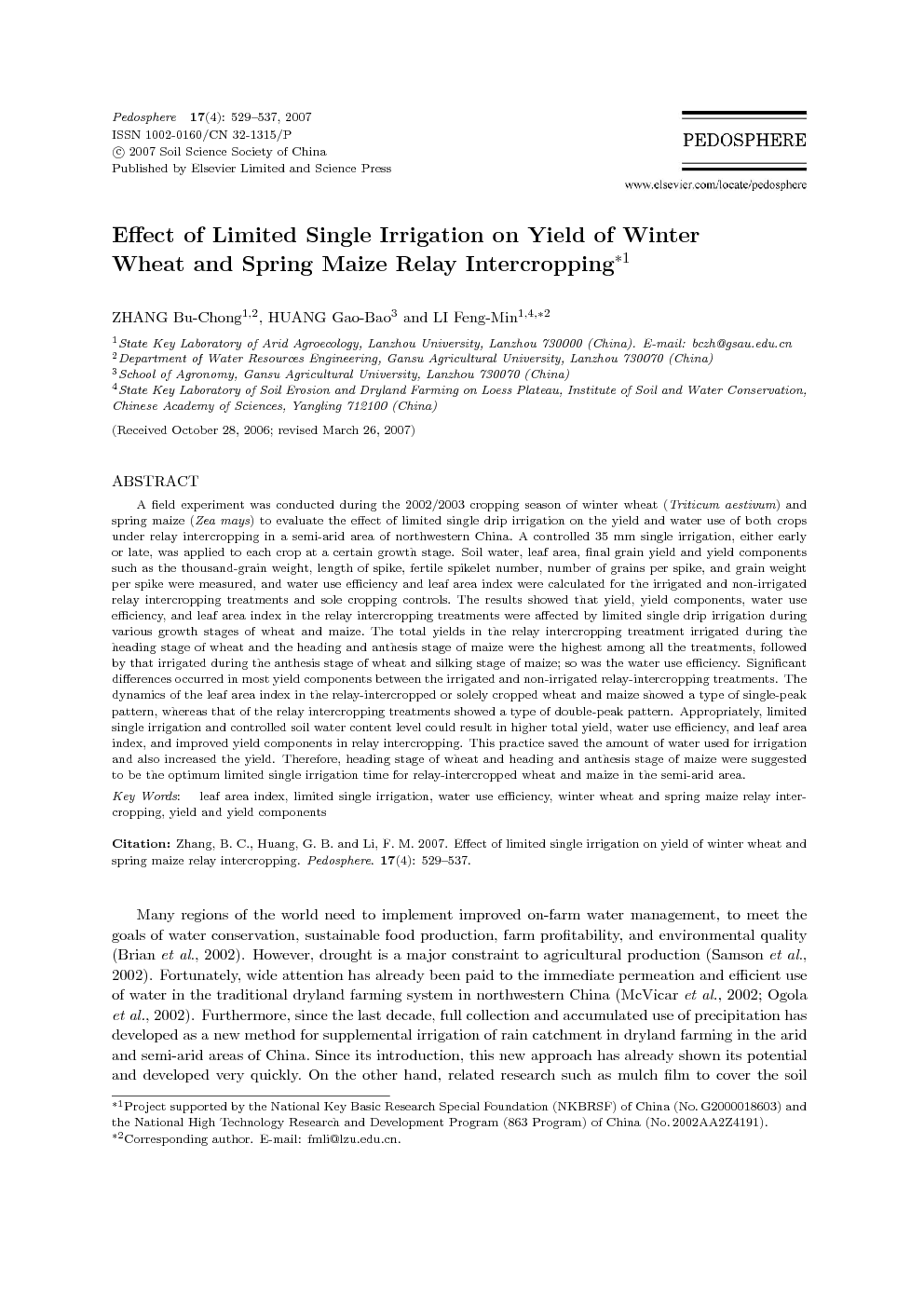 Many regions of the world need to implement improved on-farm water management, to meet the goals of water conservation, sustainable food production, farm profitability, and environmental quality (Brian et al., 2002). However, drought is a major constraint to agricultural production (Samson et al., 2002). Fortunately, wide attention has already been paid to the immediate permeation and efficient use of water in the traditional dryland farming system in northwestern China (McVicar et al., 2002; Ogola et al., 2002). Furthermore, since the last decade, full collection and accumulated use of precipitation has developed as a new method for supplemental irrigation of rain catchment in dryland farming in the arid and semi-arid areas of China. Since its introduction, this new approach has already shown its potential and developed very quickly. On the other hand, related research such as mulch film to cover the soilsurface, rainfall storage in the root zone by tillage measures, water-saving irrigation methods to reduce soil evaporation, and water percolation from the root zone and enhanced rainfall and irrigation water storage in the root zone has been done to improve water use efficiency (WUE) (Kang et al., 2002a). In addition, the 7th International Conference on Rain Irrigation in Beijing during June 1995 has promoted further development and use of rain catchment, and thus enhanced the development of highly efficient techniques of supplemental irrigation in the rain catchment. Water plays an important role in inhibiting the yields of crops and is, therefore, the most important ecological factor determining crop growth and development. Limited irrigation controls soil water deficit at certain stages of crop growth and is a very important practice in recent years in places where water resources are limited (Asseng et al., 1998; Plant et al., 1998; Stone et al., 2001; Fabeiro et al., 2002). Many studies on the effect of limited irrigation on yield performance and WUE have shown that proper supplemental irrigation can increase crop yield and WUE by improving the soil water conditions significantly (Howell, 1998; Kang et al., 2002b). It has been found that yield of spring wheat can be significantly increased by 20%–45% with 30 to 60 mm of water irrigation during its jointing stage. Supplemental irrigation of maize during the early floret differentiation stage (EFDS) provided a yield increase of 89.2% and about 41.6% of irrigation productivity improvement (Zhang, 1998). These studies also suggested that on the basis of reasonable fertilizer application it was feasible to obtain a winter wheat yield of 6 750 kg ha−1 with 50 mm of irrigation during the critical period of water demand in semi-humid but seasonable drought areas. In the traditional agricultural irrigation, yield increase was mainly attained from the amounts of water used in irrigation satisfying the biological characteristics of water demand (Ehdaie, 1995; Deng et al., 2002). Various researchers also investigated how to attain the best productive effects through limited water in arid and semi-arid areas (Zhang J. et al., 1998; Zhang H. et al., 1998). Recently, it was the economic efficiency brought about per unit water that attracted the researchers (Fabeiro et al., 2001; Kang et al., 2002a). Therefore, improving crop yield and economic efficiency per unit water in agriculture is the essential and terminal aim both for sole cropping and relay intercropping. This study aimed to evaluate the effect of limited single drip irrigation on the yield and water use of winter wheat and spring maize relay intercropping in a semi-arid area of northwestern China, to provide some information on how to control soil water and manage winter wheat together with spring maize in a relay-intercropping system under dryland farming through proper application of supplemental drip irrigation during various crop growth stages.