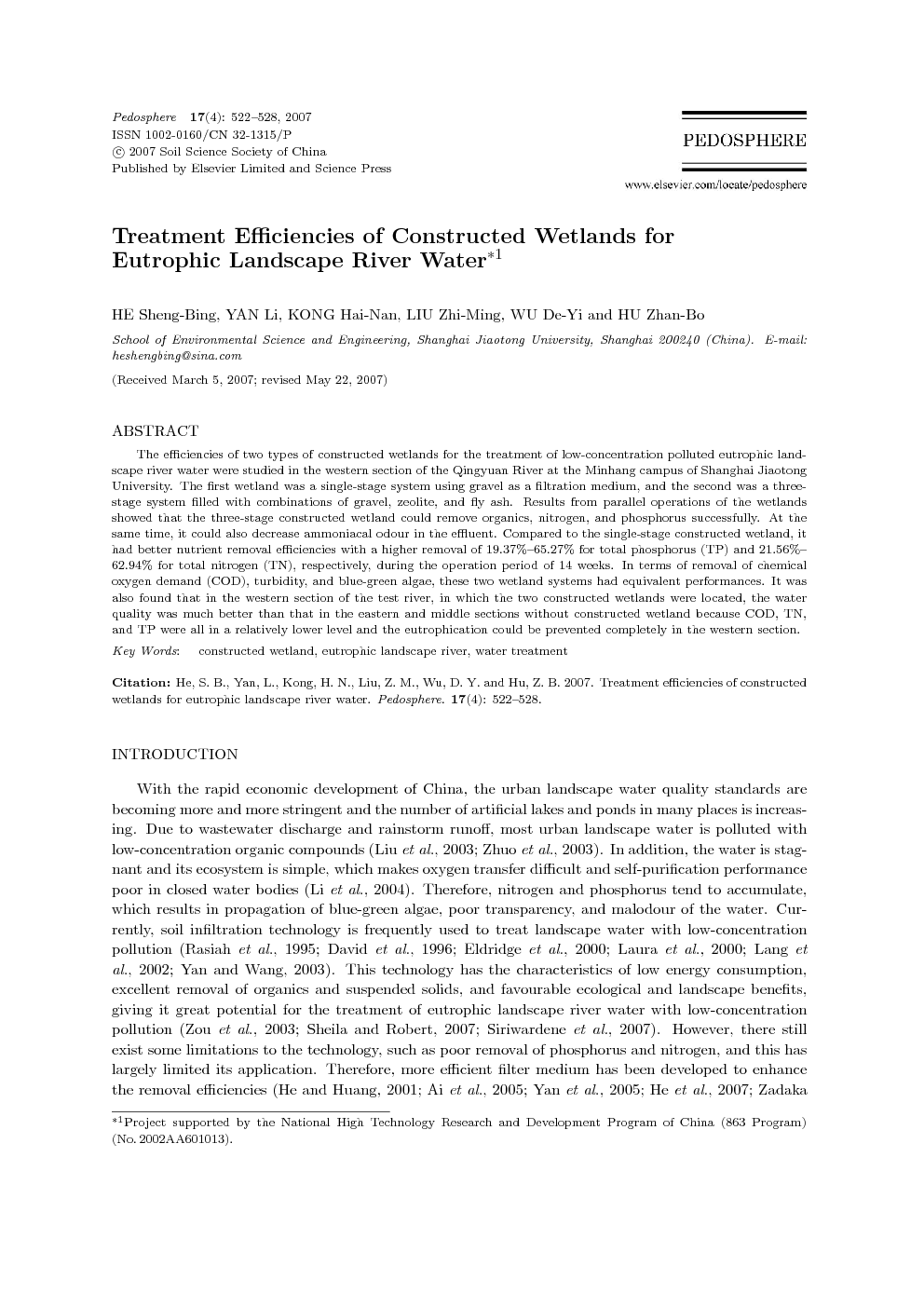 The efficiencies of two types of constructed wetlands for the treatment of low-concentration polluted eutrophic landscape river water were studied in the western section of the Qingyuan River at the Minhang campus of Shanghai Jiaotong University. The first wetland was a single-stage system using gravel as a filtration medium, and the second was a three-stage system filled with combinations of gravel, zeolite, and fly ash. Results from parallel operations of the wetlands showed that the three-stage constructed wetland could remove organics, nitrogen, and phosphorus successfully. At the same time, it could also decrease ammoniacal odour in the effluent. Compared to the single-stage constructed wetland, it had better nutrient removal efficiencies with a higher removal of 19.37%–65.27% for total phosphorus (TP) and 21.56%– 62.94% for total nitrogen (TN), respectively, during the operation period of 14 weeks. In terms of removal of chemical oxygen demand (COD), turbidity, and blue-green algae, these two wetland systems had equivalent performances. It was also found that in the western section of the test river, in which the two constructed wetlands were located, the water quality was much better than that in the eastern and middle sections without constructed wetland because COD, TN, and TP were all in a relatively lower level and the eutrophication could be prevented completely in the western section.

With the rapid economic development of China, the urban landscape water quality standards are becoming more and more stringent and the number of artificial lakes and ponds in many places is increasing. Due to wastewater discharge and rainstorm runoff, most urban landscape water is polluted with low-concentration organic compounds (Liu et al., 2003; Zhuo et al., 2003). In addition, the water is stagnant and its ecosystem is simple, which makes oxygen transfer difficult and self-purification performance poor in closed water bodies (Li et al., 2004). Therefore, nitrogen and phosphorus tend to accumulate, which results in propagation of blue-green algae, poor transparency, and malodour of the water. Currently, soil infiltration technology is frequently used to treat landscape water with low-concentration pollution (Rasiah et al., 1995; David et al., 1996; Eldridge et al., 2000; Laura et al., 2000; Lang et al., 2002; Yan and Wang, 2003). This technology has the characteristics of low energy consumption, excellent removal of organics and suspended solids, and favourable ecological and landscape benefits, giving it great potential for the treatment of eutrophic landscape river water with low-concentration pollution (Zou et al., 2003; Sheila and Robert, 2007; Siriwardene et al., 2007). However, there still exist some limitations to the technology, such as poor removal of phosphorus and nitrogen, and this has largely limited its application. Therefore, more efficient filter medium has been developed to enhance the removal efficiencies (He and Huang, 2001; Ai et al., 2005; Yan et al., 2005; He et al., 2007; Zadakaet al., 2007; Kaoru et al., 2007). From January to December of 2003, a horizontal-flow constructed wetland using gravel as a filtration medium was applied to treat landscape river water in the Minhang campus of Shanghai Jiaotong University (He, 2004). It was found that turbidity, chemical oxygen demand (COD) and blue-green algae could be significantly removed with efficiencies of 60.2%–68%, 30%–46.6%, and 80%–85%, respectively; whereas, the removal of nitrogen and phosphorus was poor, only 15.1%–20.4% and 5.8%–14.3%, respectively, during the initial operation period of two months, and became even worse with time. Phosphate concentration in effluent was sometimes even higher than that in influent because of the release of phosphorus contained at granules retained in the wetland. At the same time, oxygen in influent was consumed completely in the constructed wetland, and an obvious ammoniacal odour in the effluent could be detected. In this study, two types of horizontal-flow wetlands were reconstructed to treat eutrophic landscape river water in parallel in order to improve the performance of the constructed wetlands and the efficiencies of these two types of constructed wetlands in treating eutrophic landscape river water with low-concentration pollution were compared.

The single-stage gravel Wetland I and the three-stage (gravel, zeolite, and fly ash) Wetland II were constructed in parallel to treat eutrophic landscape river water. It was found that the three-stage wetland had better removal efficiencies for nitrogen and phosphorus and decreased the ammoniacal odour in the effluent. Similar removals for organics, turbidity and blue-green algae in the two wetlands were observed. In Wetland II, removal of organics was achieved in the first 10 m of the gravel stage, removal of nitrogen was obtained by the adsorption of ammonia in the subsequent zeolite stage, and phosphorus was mostly removed in the fly ash stage. The water quality improved significantly and the proliferation of blue-green algae was controlled in the western section of the Qingyuan River with the two constructed wetlands as compared with the other two sections of the river without constructed wetland.