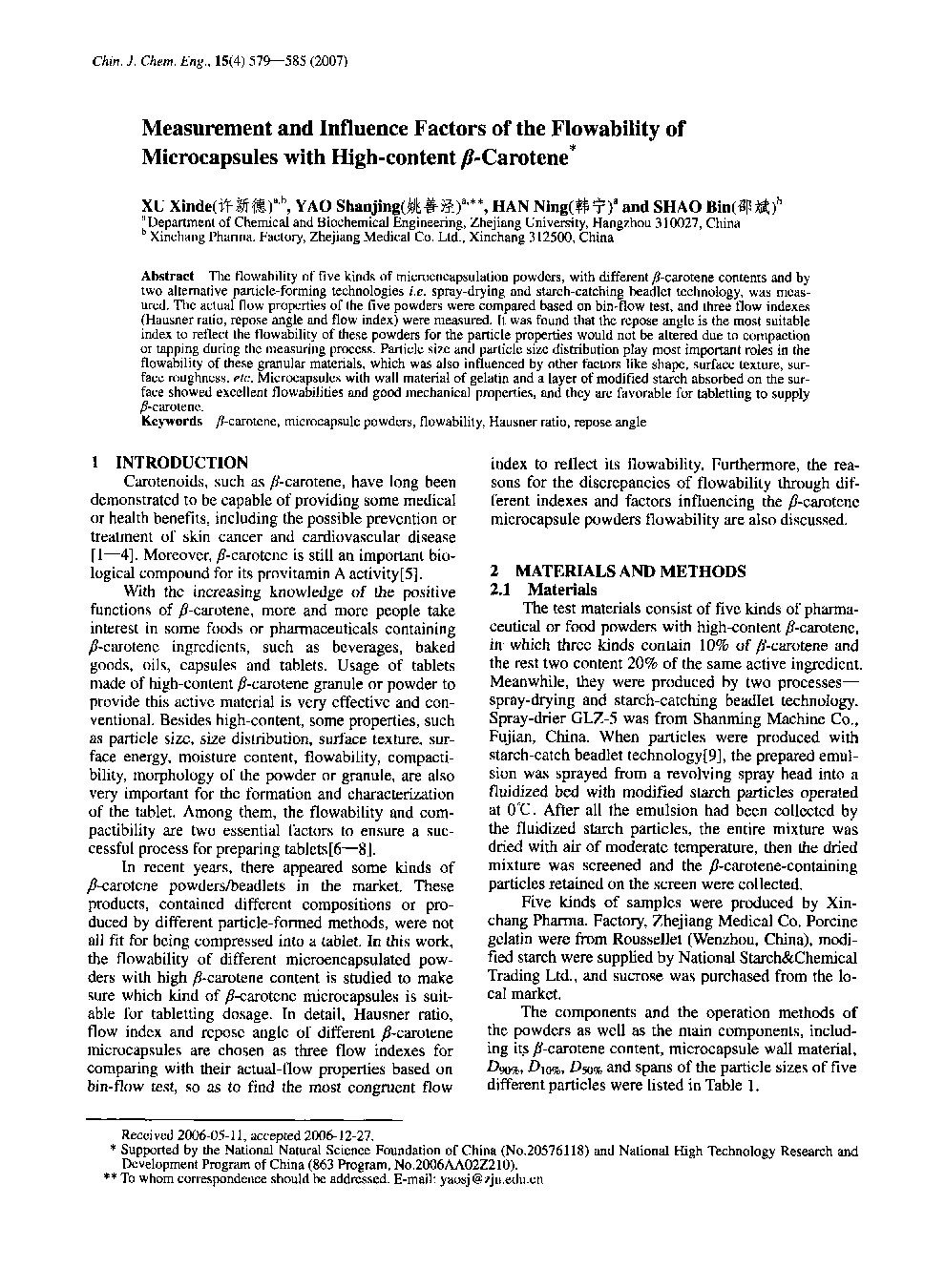 The flowability of five kinds of microencapsulation powders, with different β-carotene contents and by two alternative particle-forming technologies i.e. spray-drying and starch-catching beadlet technology, was measured. The actual flow properties of the five powders were compared based on bin-flow test, and three flow indexes (Hausner ratio, repose angle and flow index) were measured. It was found that the repose angle is the most suitable index to reflect the flowability of these powders for the particle properties would not be altered due to compaction or tapping during the measuring process. Particle size and particle size distribution play most important roles in the flowability of these granular materials, which was also influenced by other factors like shape, surface texture, surface roughness, etc. Microcapsules with wall material of gelatin and a layer of modified starch absorbed on the surface showed excellent flowabilities and good mechanical properties, and they are favorable for tabletting to supply β-carotene.

Carotenoids, such as /?-carotene, have long been demonstrated to be capable of providing some medical or health benefits, including the possible prevention or treatment of skin cancer and cardiovascular disease [ 1-41. Moreover, /?-carotene is still an important biological compound for its provitamin A activity[5]. With the increasing knowledge of the positive functions of /?-carotene, more and more people take interest in some foods or pharmaceuticals containing /?-carotene ingredients, such as beverages, baked goods, oils, capsules and tablets. Usage of tablets made of high-content p-carotene granule or powder to provide this active material is very effective and conventional. Besides high-content, some properties, such as particle size, size distribution, surface texture, surface energy, moisture content, flowability, compactibility, morphology of the powder or granule, are also very important for the formation and characterization of the tablet. Among them, the flowability and compactibility are two essential factors to ensure a successful process for preparing tablets[6-81. In recent years, there appeared some kinds of ,&carotene powdersheadlets in the market. These products, contained different compositions or produced by different particle-formed methods, were not all fit for being compressed into a tablet. In this work, the flowability of different microencapsulated powders with high j?-carotene content is studied to make sure which kind of /?-carotene microcapsules is suitable for tabletting dosage. In detail, Hausner ratio, flow index and repose angle of different /?-carotene microcapsules are chosen as three flow indexes for comparing with their actual-flow properties based on bin-flow test, so as to find the most congruent flowindex to reflect its flowability. Furthermore, the reasons for the discrepancies of flowability through different indexes and factors influencing the p-carotene microcapsule powders flowability are also discussed.

Hausner ratio and flow index, measuring particle flowabilities indirectively, may be deceptive or misleading. In the case of no compaction and tapping, that is, no external forces are imposed to make particles deformation during the process of manufacture, and the repose angle is an instantaneous and easy way to measure the particle flowability. For spray-drying technology, when used gelatin and sucrose as capsule wall material, the particles, such as SD-lOG, SD-20G with large interparticle adhesion forces will show low flowabilities. On the other hand, when using modified starch as wall material, no matter how good flow property the particles have, because of the cracks, pores, dents in the outer surface, and solid-bridge between particles, they are not fit for compressing into tablets, too. When starch-catching technology was applied, the microencapsulated powder, for example, SC-1 OGS and SC-20GS, with gelatin and sucrose as wall materials, absorbed a layer modified starch on the outer surface and showed perfect flowability and good mechanical properties, seemingly suitable for producing tablet.