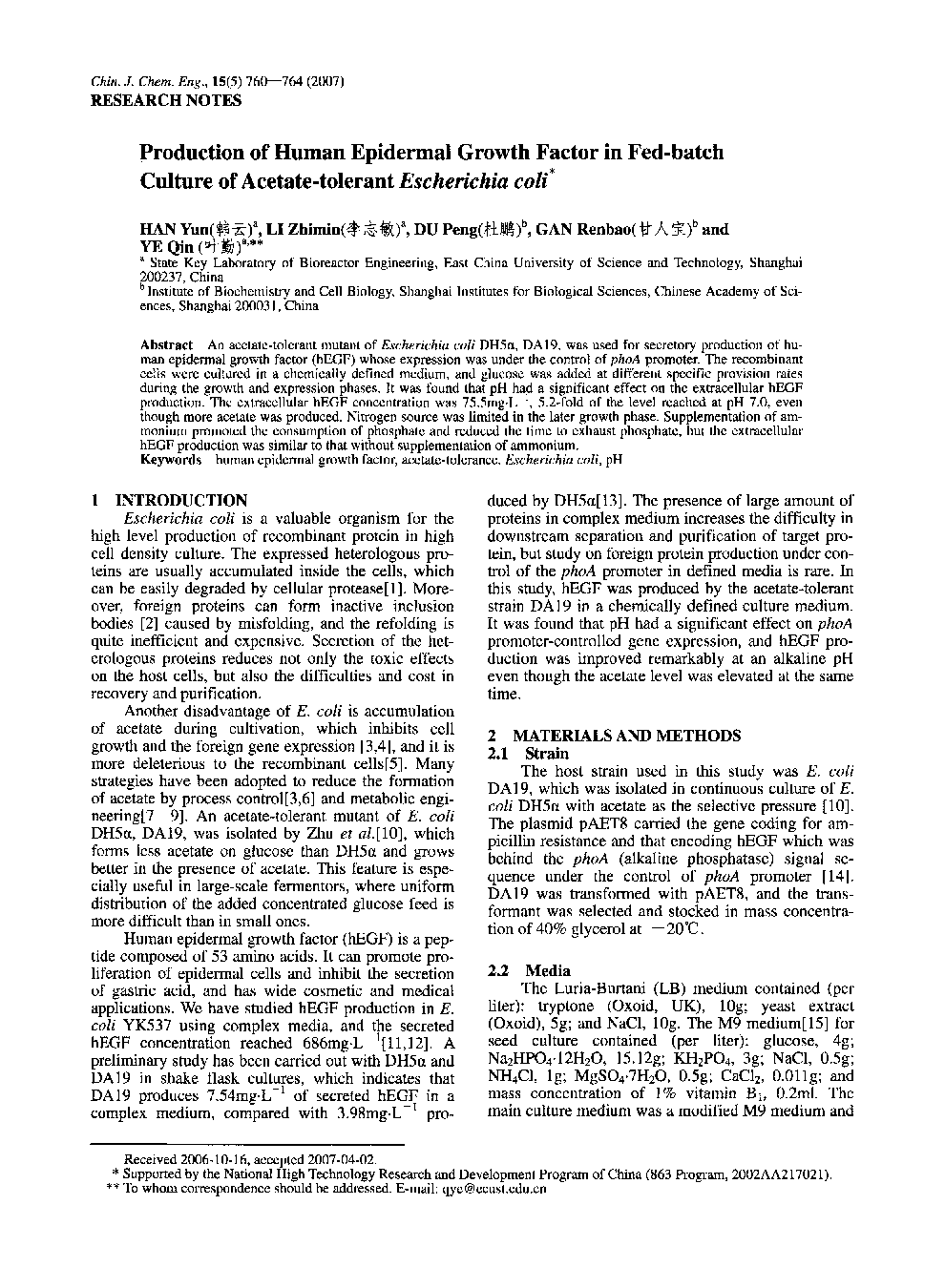 An acetate-tolerant mutant of Escherichia coli DH5α, DA19, was used for secretory production of human epidermal growth factor (hEGF) whose expression was under the control of phoA promoter. The recombinant cells were cultured in a chemically defined medium, and glucose was added at different specific provision rates during the growth and expression phases. It was found that pH had a significant effect on the extracellular hEGF production. The extracellular hEGF concentration was 75.5mg.L−1, 5.2-fold of the level reached at pH 7.0, even though more acetate was produced. Nitrogen source was limited in the later growth phase. Supplementation of ammonium promoted the consumption of phosphate and reduced the time to exhaust phosphate, but the extracellular hEGF production was similar to that without supplementation of ammonium.

Escherichia coli is a valuable organism for the high level production of recombinant protein in high cell density culture. The expressed heterologous proteins are usually accumulated inside the cells, which can be easily degraded by cellular protease[ 11. Moreover, foreign proteins can form inactive inclusion bodies [2] caused by misfolding, and the refolding is quite inefficient and expensive. Secretion of the heterologous proteins reduces not only the toxic effects on the host cells, but also the difficulties and cost in recovery and purification. Another disadvantage of E. coli is accumulation of acetate during cultivation, which inhibits cell growth and the foreign gene expression [3,4], and it is more deleterious to the recombinant cells[S]. Many strategies have been adopted to reduce the formation of acetate by process control[3,6] and metabolic engineering[ 7-9]. An acetate-tolerant mutant of E. coli DHSa, DA19, was isolated by Zhu et aZ.[10], which forms less acetate on glucose than DHSa and grows better in the presence of acetate. This feature is especially useful in large-scale fermentors, where uniform distribution of the added concentrated glucose feed is more difficult than in small ones. Human epidermal growth factor (hEGF) is a peptide composed of 53 amino acids. It can promote proliferation of epidermal cells and inhibit the secretion of gastric acid, and has wide cosmetic and medical applications. We have studied hEGF production in E. coli YKS37 using complex media, and the secreted hEGF concentration reached 686mg.L - [ 11,121. A preliminary study has been carried out with DHSa and DA19 in shake flask cultures, which indicates that DA19 produces 7.54mg-L-' of secreted hEG7 in a complex medium, compared with 3.98mg.L- producedby DHSa[13]. The presence of large amount of proteins in complex medium increases the difficulty in downstream separation and purification of target protein, but study on foreign protein production under control of the phoA promoter in defined media is rare. In this study, hEGF was produced by the acetate-tolerant strain DA19 in a chemically defined culture medium. It was found that pH had a significant effect on phoA promoter-controlled gene expression, and hEGF production was improved remarkably at an alkaline pH