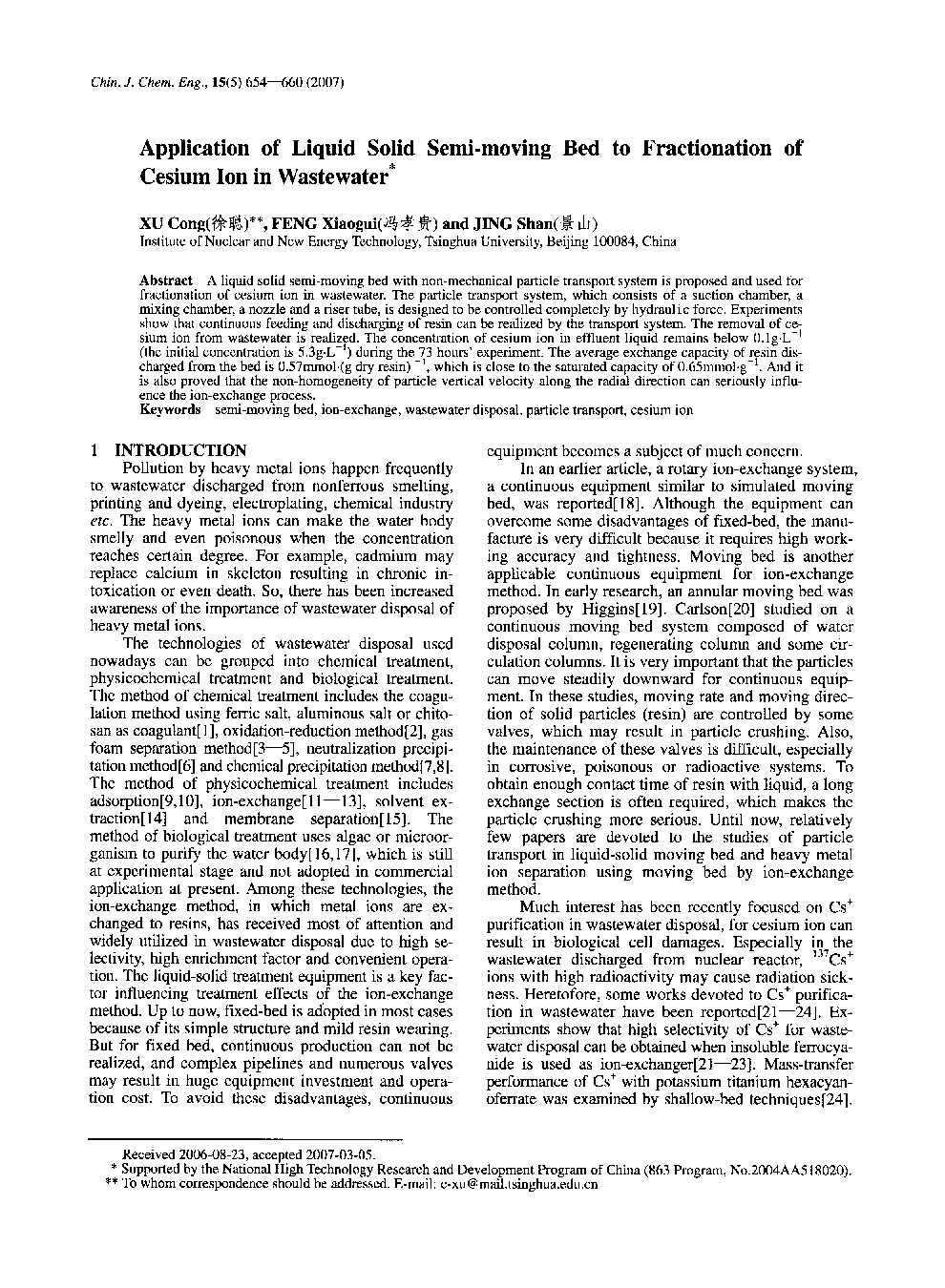 A liquid solid semi-moving bed with non-mechanical particle transport system is proposed and used for fractionation of cesium ion in wastewater. The particle transport system, which consists of a suction chamber, a mixing chamber, a nozzle and a riser tube, is designed to be controlled completely by hydraulic force. Experiments show that continuous feeding and discharging of resin can be realized by the transport system. The removal of cesium ion from wastewater is realized. The concentration of cesium ion in effluent liquid remains below 0.1g · L−1 (the initial concentration is 5.3g · L−1) during the 73 hours' experiment. The average exchange capacity of resin discharged from the bed is 0.57 mmol · (g dry resin)−1, which is close to the saturated capacity of 0.65 mmol · g−1. And it is also proved that the non-homogeneity of particle vertical velocity along the radial direction can seriously influence the ion-exchange process.

Pollution by heavy metal ions happen frequently to wastewater discharged from nonferrous smelting, printing and dyeing, electroplating, chemical industry etc. The heavy metal ions can make the water body smelly and even poisonous when the concentration reaches certain degree. For example, cadmium may replace calcium in skeleton resulting in chronic intoxication or even death. So, there has been increased awareness of the importance of wastewater disposal of heavy metal ions. The technologies of wastewater disposal used nowadays can be grouped into chemical treatment, physicochemical treatment and biological treatment. The method of chemical treatment includes the coagulation method using femc salt, aluminous salt or chitosan as coagulant[ 11, oxidation-reduction method[2], gas foam separation method[3-51, neutralization precipitation method[6] and chemical precipitation method[7,8]. The method of physicochemical treatment includes adsorption[9,10], ion-exchange[ 11-13], solvent extraction[ 141 and membrane separation[ 151. The method of biological treatment uses algae or microorganism to purify the water body[16,17], which is still at experimental stage and not adopted in commercial application at present. Among these technologies, the ion-exchange method, in which metal ions are exchanged to resins, has received most of attention and widely utilized in wastewater disposal due to high selectivity, high enrichment factor and convenient operation. The liquid-solid treatment equipment is a key factor influencing treatment effects of the ion-exchange method. Up to now, fixed-bed is adopted in most cases because of its simple structure and mild resin wearing. But for fixed bed, continuous production can not be realized, and complex pipelines and numerous valves may result in huge equipment investment and operation cost. To avoid these disadvantages, continuous equipment becomes a subject of much concern. In an earlier article, a rotary ion-exchange system, a continuous equipment similar to simulated moving bed, was reported[ 181. Although the equipment can overcome some disadvantages of fixed-bed, the manufacture is very difficult because it requires high working accuracy and tightness. Moving bed is another applicable continuous equipment for ion-exchange method. In early research, an annular moving bed was proposed by Higgins[l9]. Carlson[20] studied on a continuous moving bed system composed of water disposal column, regenerating column and some circulation columns. It is very important that the particles can move steadily downward for continuous equipment. In these studies, moving rate and moving direction of solid particles (resin) are controlled by some valves, which may result in particle crushing. Also, the maintenance of these valves is difficult, especially in corrosive, poisonous or radioactive systems. To obtain enough contact time of resin with liquid, a long exchange section is often required, which makes the particle crushing more serious. Until now, relatively few papers are devoted to the studies of particle transport in liquid-solid moving bed and heavy metal ion separation using moving bed by ion-exchange method. Much interest has been recently focused on Cs' purification in wastewater disposal, for cesium ion can result in biological cell damages. Especially in the wastewater discharged from nuclear reactor, I3'Csf ions with high radioactivity may cause radiation sickness. Heretofore, some works devoted to Cs' purification in wastewater have been reported[21-241. Experiments show that high selectivity of Cs' for wastewater disposal can be obtained when insoluble ferrocyanide is used as ion-exchanger[21-231. Mass-transfer performance of Cs' with potassium titanium hexacyanoferrate was examined by shallow-bed techniques[24].In this article, a liquid-solid semi-moving bed with non-mechanical particle transport system and potassium titanium hexacyanoferrate as ion-exchanger is proposed and tested for purification of cesium ion.

In this work, a liquid-solid semi-moving bed with non-mechanical particle transport system is proposed and used for ion-exchange of cesium ion in wastewater. The transport system is operated completely by hydraulic force. Conclusions may be drawn as follows: (1) Continuous operation for feeding and discharging of resins can be realized steadily by the non-mechanical particle transport system, which is especially suitable for corrosive, poisonous or radioactive system. (2) The cesium ion in wastewater can be well separated in the liquid solid semi-moving bed using ion-exchangers prepared by the method in this article. The concentration of Cs' within effluent liquid keeqs lower than 2% of the initial concentration (5.3g.L- ) throughout 73h treatment process in most cases. The average exchange capacity of resins discharged from the bed is 0.57mmol.(g dry resin)-', which is close to the saturated capacity of 0.65mmol.g-'.(3) The distribution of exchange capacity of resins along axial direction is non-monotonic, which is caused by the vertical speed difference at radial positions for particles. Large area ratio of the exchange section to the conduit and the conical distributor are the key factors. The work in this article is a preliminary investigation for semi-moving bed, and problems such as adjustment of flow pattern of particles are required to be examined further.