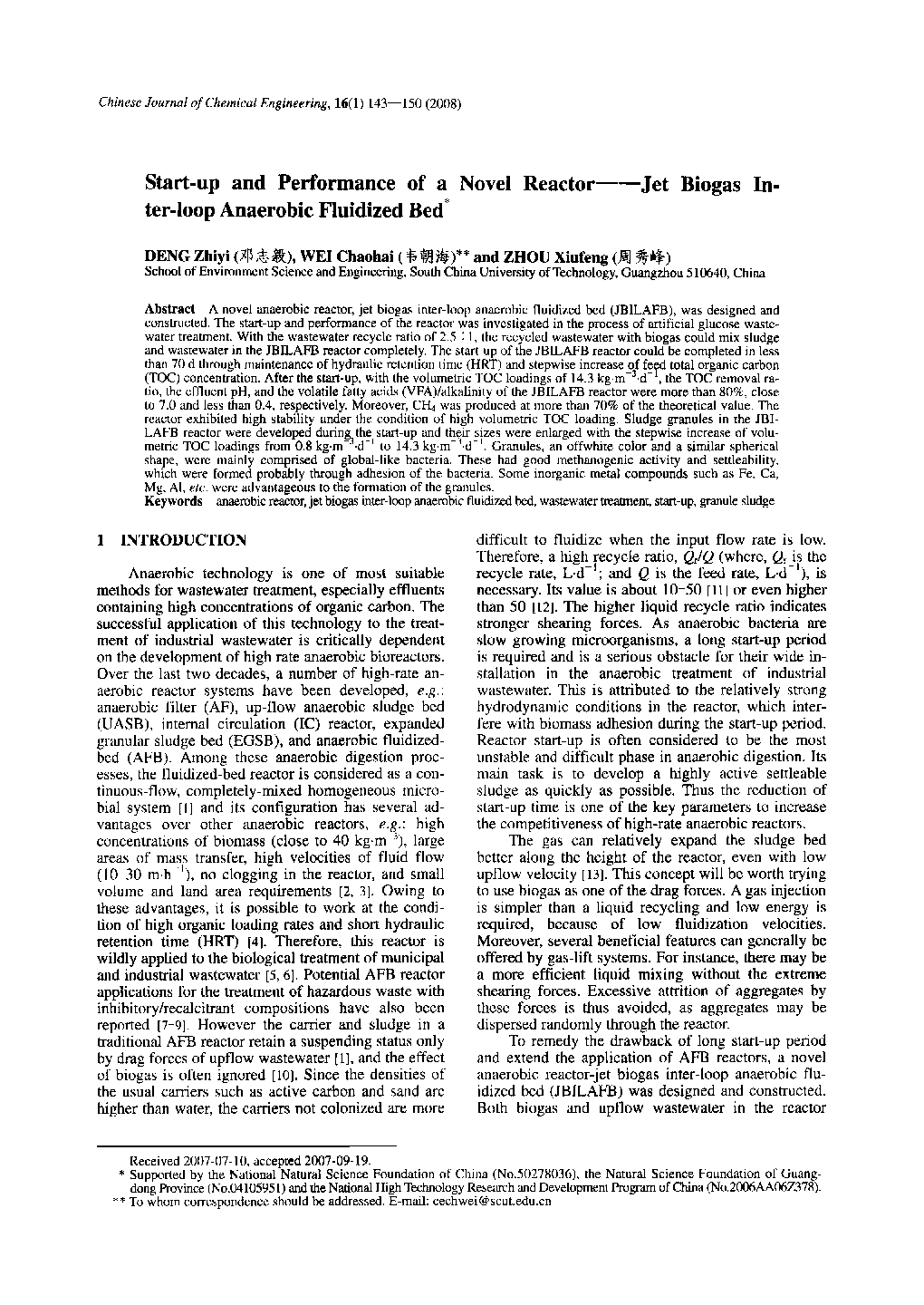 A novel anaerobic reactor, jet biogas inter-loop anaerobic fluidized bed (JBILAFB), was designed and constructed. The start-up and performance of the reactor was investigated in the process of artificial glucose wastewater treatment. With the wastewater recycle ratio of 2.5 : 1, the recycled wastewater with biogas could mix sludge and wastewater in the JBILAFB reactor completely. The start-up of the JBILAFB reactor could be completed in less than 70 d through maintenance of hydraulic retention time (HRT) and stepwise increase of feed total organic carbon (TOC) concentration. After the start-up, with the volumetric TOC loadings of 14.3 kg·m−3·d−1, the TOC removal ratio, the effluent pH, and the volatile fatty acids (VFA)/alkalinity of the JBILAFB reactor were more than 80%, close to 7.0 and less than 0.4, respectively. Moreover, CH4 was produced at more than 70% of the theoretical value. The reactor exhibited high stability under the condition of high volumetric TOC loading. Sludge granules in the JBILAFB reactor were developed during the start-up and their sizes were enlarged with the stepwise increase of volumetric TOC loadings from 0.8 kg·m−3·d−1 to 14.3 kg·m−3·d−1. Granules, an offwhite color and a similar spherical shape, were mainly comprised of global-like bacteria. These had good methanogenic activity and settleability, which were formed probably through adhesion of the bacteria. Some inorganic metal compounds such as Fe, Ca, Mg, Al, etc. were advantageous to the formation of the granules.

Anaerobic technology is one of most suitable methods for wastewater treatment, especially effluents containing high concentrations of organic carbon. The successful application of this technology to the treatment of industrial wastewater is critically dependent on the development of high rate anaerobic bioreactors. Over the last two decades, a number of high-rate anaerobic reactor systems have been developed, e.g.: anaerobic filter (AF), up-flow anaerobic sludge bed (UASB), internal circulation (IC) reactor, expanded granular sludge bed (EGSB), and anaerobic fluidizedbed (AFB). Among these anaerobic digestion processes, the fluidized-bed reactor is considered as a continuous- flow, completely-mixed homogeneous microbial system [I] and its configuration has several advantages over other anaerobic reactors, e.g.: high concentrations of biomass (close to 40 kg.rn-'), large areas of mass transfer, high velocities of fluid flow (10-30 m.h-'), no clogging in the reactor, and small volume and land area requirements [2, 31. Owing to these advantages, it is possible to work at the condition of high organic loading rates and short hydraulic retention time (HRT) [4]. Therefore, this reactor is wildly applied to the biological treatment of municipal and industrial wastewater [5,6]. Potential AFB reactor applications for the treatment of hazardous waste with inhibitoryhecalcitrant compositions have also been reported [7-91. However the carrier and sludge in a traditional AFB reactor retain a suspending status only by drag forces of upflow wastewater [ 11, and the effect of biogas is often ignored [lo]. Since the densities of the usual carriers such as active carbon and sand are higher than water, the carriers not colonized are more difficult to fluidize when the input flow rate is low. Therefore, a high recycle ratio, QJQ (where, Qr if the recycle rate, L d ' ; and Q is the feed rate, Led- ), is necessary. Its value is about 10-50 [ I l l or even higher than 50 [12]. The higher liquid recycle ratio indicates stronger shearing forces. As anaerobic bacteria are slow growing microorganisms, a long start-up period is required and is a serious obstacle for their wide installation in the anaerobic treatment of industrial wastewater. This is attributed to the relatively strong hydrodynamic conditions in the reactor, which interfere with biomass adhesion during the start-up period. Reactor start-up is often considered to be the most unstable and difficult phase in anaerobic digestion. Its main task is to develop a highly active settleable sludge as quickly as possible. Thus the reduction of start-up time is one of the key parameters to increase the competitiveness of high-rate anaerobic reactors. The gas can relatively expand the sludge bed better along the height of the reactor, even with low upflow velocity [13]. This concept will be worth trying to use biogas as one of the drag forces. A gas injection is simpler than a liquid recycling and low energy is required, because of low fluidization velocities. Moreover, several beneficial features can generally be offered by gas-lift systems. For instance, there may be a more efficient liquid mixing without the extreme shearing forces. Excessive attrition of aggregates by these forces is thus avoided, as aggregates may be dispersed randomly through the reactor. To remedy the drawback of long start-up period and extend the application of AFB reactors, a novel anaerobic reactor-jet biogas inter-loop anaerobic fluidized bed (JBILAFB) was designed and constructed. Both biogas and upflow wastewater in the reactorwere used as drag forces to keep the anaerobic sludge in suspension. This report describes the start-up and operation performance of the pilot-scale JBILAFB reactor, specifically the operation parameters, the loading capacity, and the specific sludge granules.

Based on the results of this pilot study, the following conclusions can be drawn. (1) By recycling the wastewater with biogas produced in the reactor, the mixing time of sludge and wastewater was shortened with a low liquid recycle ratio, which was less than 1/5 of that without biogas. (2) The successful start-up operation of the JBILAFB reactor was accomplished in a period of less than 70 d through the maintenance of hydraulic retention time (HRT) and the stepwise increase of feed total organic carbon (TOC) concentration. Sludge granules in the JBILAFB reactor were developed after the start-up. (:) W,ith the feed volumetric TOC loading of 14.3 kg.m- .d- , the biogas pr;)duction of the JBILAFB reactor reached 74.9 L d with 77.4% being CH4. The CH4 production rate could be attained to be more than 70% of the theoretical value. The effluent pH and the volatile fatty acids (VFA)/alkalinity were close to 7.0 and less than 0.4 respectively. The JBILAFB reactor exhibited high stability under the condition of high volumetric TOC loading. (4) The sizes of sludge granules in the JBILAFB reactor increased with the stepwise inyease of volumetric TOC loadings from 0.8 kg.m- .d-l to 14.3 kg.m 3.d I . Granules, which mainly consisted of global-like bacteria, had an offwhite color and a similar spherical shape. A! the feed volumetric TOC loading rate of 14.3 gam- 6',th ese granules had a mean diameter of 1.55 mm and had good methanogenic activity and settleability. Moreover, there was a significant presence of inorganic metallic elements such as Fe, Ca, Mg, and A1 etc. in the granules. It was speculated that these inorganic elements were advantageous to the formation of granules in the anaerobic sludge of the JBILAFB reactor.