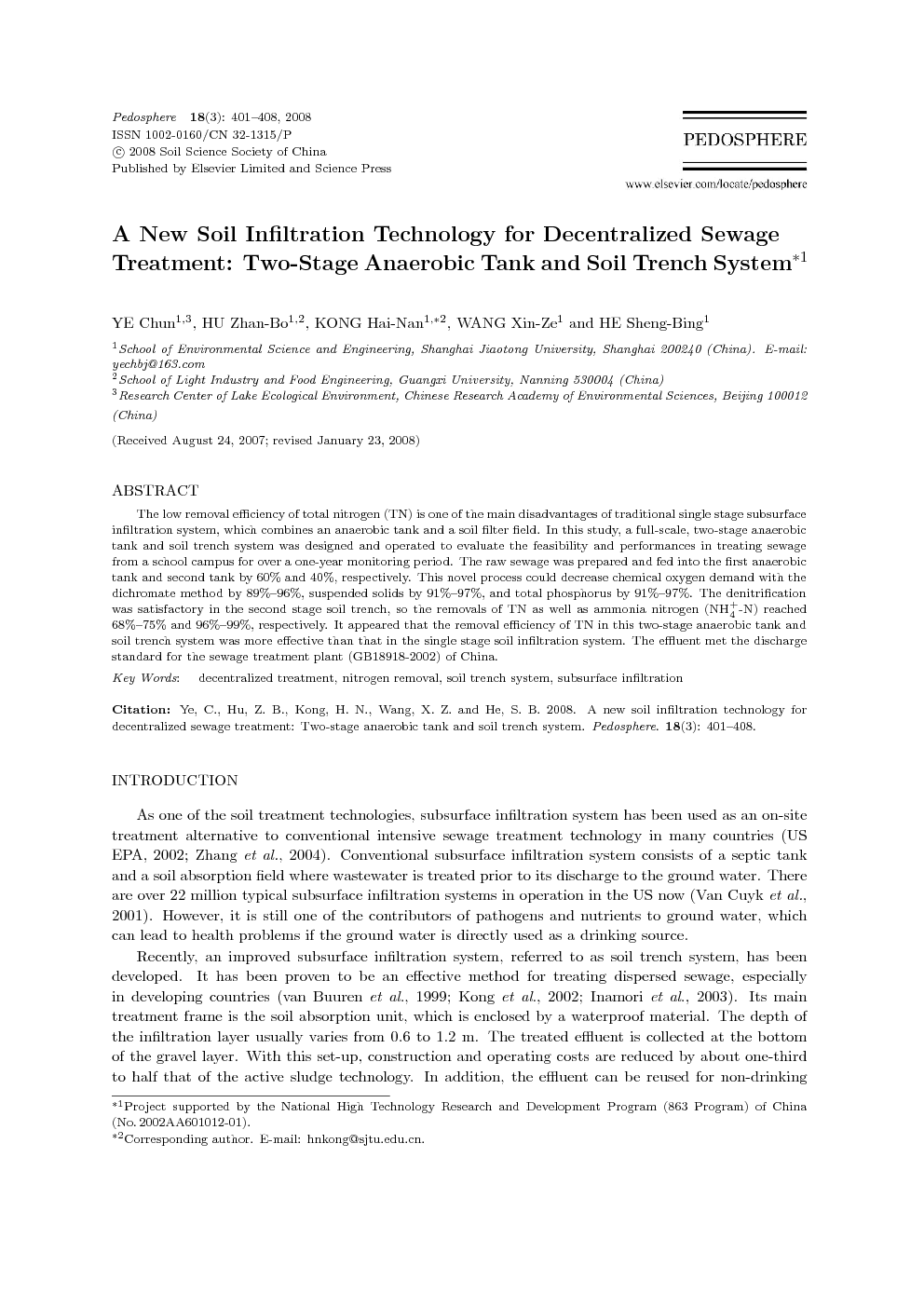 The low removal eefficiency of total nitrogen (TN) is one of the main disadvantages of traditional single stage subsurface inflltration system, which combines an anaerobic tank and a soil fllter fleld. In this study, a full-scale, two-stage anaerobic tank and soil trench system was designed and operated to evaluate the feasibility and performances in treating sewage from a school campus for over a one-year monitoring period. The raw sewage was prepared and fed into the flrst anaerobic tank and second tank by 60% and 40%, respectively. This novel process could decrease chemical oxygen demand with the dichromate method by 89%–96%, suspended solids by 91%–97%, and total phosphorus by 91%–97%. The denitriflcation was satisfactory in the second stage soil trench, so the removals of TN as well as ammonia nitrogen (NH4+ -N) reached 68%–75% and 96%–99%, respectively. It appeared that the removal eefficiency of TN in this two-stage anaerobic tank and soil trench system was more efiective than that in the single stage soil inflltration system. The effluent met the discharge standard for the sewage treatment plant (GB18918-2002) of China.

As one of the soil treatment technologies, subsurface infiltration system has been used as an on-site treatment alternative to conventional intensive sewage treatment technology in many countries (US EPA, 2002; Zhang et al., 2004). Conventional subsurface infiltration system consists of a septic tank and a soil absorption field where wastewater is treated prior to its discharge to the ground water. There are over 22 million typical subsurface infiltration systems in operation in the US now (Van Cuyk et al., 2001). However, it is still one of the contributors of pathogens and nutrients to ground water, which can lead to health problems if the ground water is directly used as a drinking source. Recently, an improved subsurface infiltration system, referred to as soil trench system, has been developed. It has been proven to be an effective method for treating dispersed sewage, especially in developing countries (van Buuren et al., 1999; Kong et al., 2002; Inamori et al., 2003). Its main treatment frame is the soil absorption unit, which is enclosed by a waterproof material. The depth of the infiltration layer usually varies from 0.6 to 1.2 m. The treated effluent is collected at the bottom of the gravel layer. With this set-up, construction and operating costs are reduced by about one-third to half that of the active sludge technology. In addition, the effluent can be reused for non-drinkingpurposes (Sun et al., 1998; Kong et al., 2003). During the last four years, over 100 full-scale, on-site soil trench systems have been set up and put into successful operation in different climatic zones in China. These systems operate at a flow rate between 5 and 500 m3 day−1 (Kong et al., 2002; Hu et al., 2004). Soil trench filter combined with an anaerobic tank in the single-stage soil trench process has been found to achieve chemical oxygen demand (COD), total phosphorus (TP), suspended solids (SS), and NH+4 -N removals of 80%–92%, 80%–96%, 80%–86%, and 70%–81%, respectively. However, one limitation of single-stage soil trench system lies in its low total nitrogen (TN) removal, which is only around 23%–55% (Kong et al., 2002, 2004; Sun et al., 1998). During the percolation process of the traditional single stage soil infiltration system, both nitrification and denitrification occurred within the same soil infiltration unit. As the carbon content decreased when the organic substances were removed along the soil depth from the top to the bottom, it was found that the carbon source was not enough for the denitrification that followed the nitrification stage. This led to a low level of TN removal. Therefore, further research to increase the efficiency of denitrification is important for biological nitrogen removal in soil trench systems. The use of soil mixed with peat and plastic foam as filter materials arranged in a multilayer fashion, is one approach to improve the nitrogen removal efficiency. By this system, a mean removal of 75.5% for TN has been attained at certain period (from the thirtieth to fiftieth day) during a lab-scale operation (Zhang et al., 2004). A previous study also proposed the use of a sand filter plus a post-positioned denitrification tank, where a carbon source such as grey water or ethanol was fed into the denitrification tank for increasing nitrogen removal efficiency (van Buuren et al., 1999). However, up to now, very little attention has been paid to the combination pattern of the multistage anaerobic tank and soil trench filter for improving the TN removal efficiency, especially in practice, for treatment of decentralized domestic wastewater. Therefore, such a system was evaluated in this research for improving TN removal. The raw sewage was distributed into two stage anaerobic tanks separately. The aim of the process configuration was to utilize the raw sewage fed into the second stage as a carbon source for denitrification of the nitrate and nitrite in effluent that came from the first stage soil trench. In this article, a full-scale, two-stage anaerobic tank and soil trench system for the treatment of sewage was designed and operated to evaluate the feasibility and performances in treating sewage from a school campus for over a period of one year.

Under the conditions studied, the full-scale, two-stage anaerobic tank and soil trench system demonstrated a stable and advanced treatment performance. The effluent met the discharge standards of pollutant for municipal wastewater treatment plant (GB18918-2002) of China. The treated water presented the potential for lawn watering and road washing by the reuse criteria (GB/T18920) of China. By comparison, single stage system only achieves lower than 55% TN removal. The most significant quality of this system was the attainment of high TN removal efficiency of 68%–75%. The second stage anaerobic tank was found to be in effective function as a post-positioned denitrification reactor by the direct addition 40% of raw sewage, which supplied necessary organic substance as carbon source for further reduction of nitrate and nitrates in the effluent of the first stage filter. According to the operation experience, this two-stage anaerobic tank and soil trench system had a reliable operation performance, and thus provided a viable treatment solution to the dispersed domestic wastewater treatment. A startup period of about 11 to 15 weeks was necessary for the full-scale system to reach steady state. Beyond this time period, excellent effluent could be achieved by this novel process configuration.