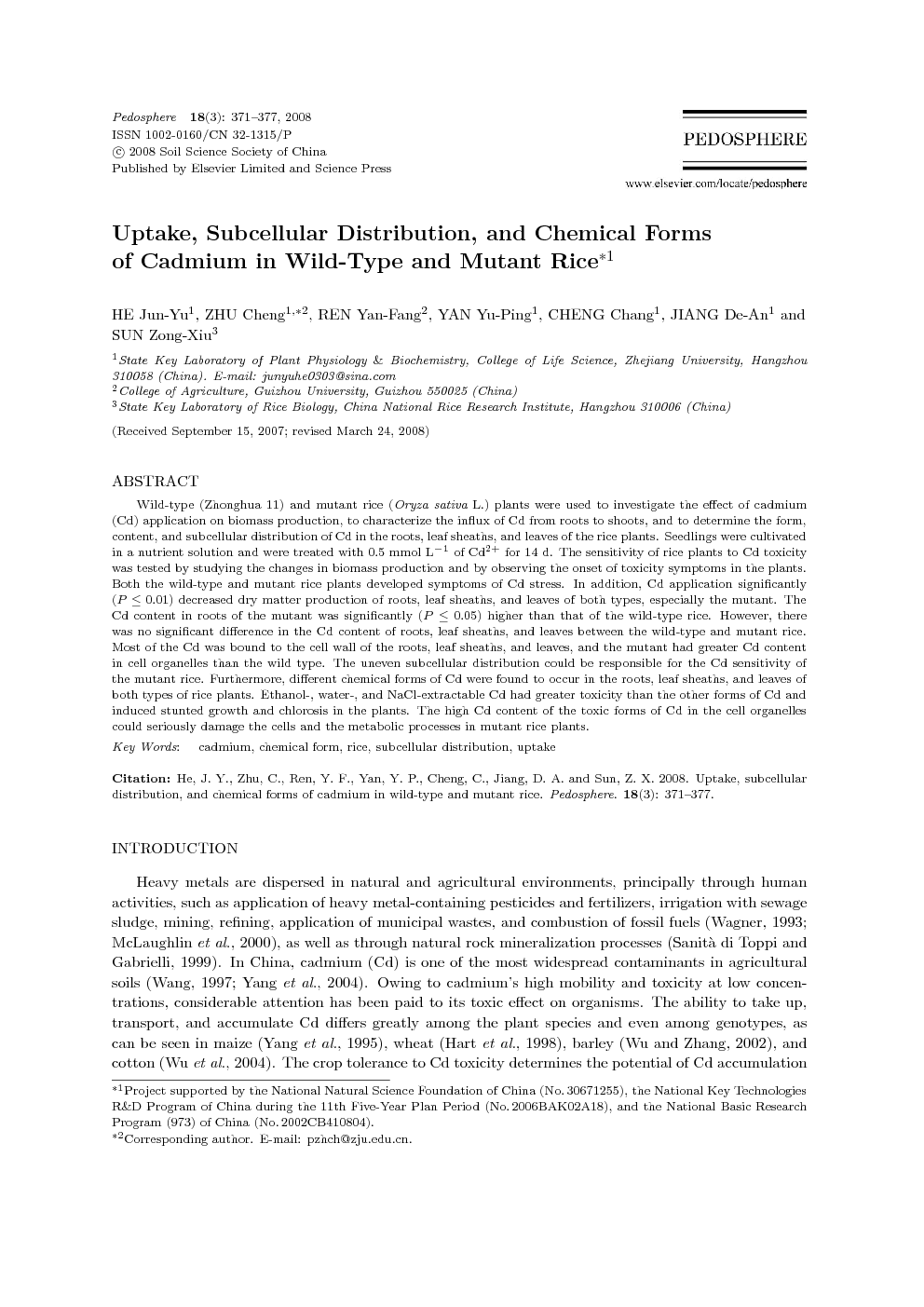 Wild-type (Zhonghua 11) and mutant rice (Oryza sativa L.) plants were used to investigate the efiect of cadmium (Cd) application on biomass production, to characterize the influx of Cd from roots to shoots, and to determine the form, content, and subcellular distribution of Cd in the roots, leaf sheaths, and leaves of the rice plants. Seedlings were cultivated in a nutrient solution and were treated with 0.5 mmol L−1 of Cd2+ for 14 d. The sensitivity of rice plants to Cd toxicity was tested by studying the changes in biomass production and by observing the onset of toxicity symptoms in the plants. Both the wild-type and mutant rice plants developed symptoms of Cd stress. In addition, Cd application signiflcantly (P ≤ 0.01) decreased dry matter production of roots, leaf sheaths, and leaves of both types, especially the mutant. The Cd content in roots of the mutant was signiflcantly (P ≤ 0.05) higher than that of the wild-type rice. However, there was no signiflcant difierence in the Cd content of roots, leaf sheaths, and leaves between the wild-type and mutant rice. Most of the Cd was bound to the cell wall of the roots, leaf sheaths, and leaves, and the mutant had greater Cd content in cell organelles than the wild type. The uneven subcellular distribution could be responsible for the Cd sensitivity of the mutant rice. Furthermore, difierent chemical forms of Cd were found to occur in the roots, leaf sheaths, and leaves of both types of rice plants. Ethanol-, water-, and NaCl-extractable Cd had greater toxicity than the other forms of Cd and induced stunted growth and chlorosis in the plants. The high Cd content of the toxic forms of Cd in the cell organelles could seriously damage the cells and the metabolic processes in mutant rice plants.

Heavy metals are dispersed in natural and agricultural environments, principally through human activities, such as application of heavy metal-containing pesticides and fertilizers, irrigation with sewage sludge, mining, refining, application of municipal wastes, and combustion of fossil fuels (Wagner, 1993; McLaughlin et al., 2000), as well as through natural rock mineralization processes (Sanit`a di Toppi and Gabrielli, 1999). In China, cadmium (Cd) is one of the most widespread contaminants in agricultural soils (Wang, 1997; Yang et al., 2004). Owing to cadmium’s high mobility and toxicity at low concentrations, considerable attention has been paid to its toxic effect on organisms. The ability to take up, transport, and accumulate Cd differs greatly among the plant species and even among genotypes, as can be seen in maize (Yang et al., 1995), wheat (Hart et al., 1998), barley (Wu and Zhang, 2002), and cotton (Wu et al., 2004). The crop tolerance to Cd toxicity determines the potential of Cd accumulationand the physiological responses to Cd toxicity (Wu et al., 2004). In most cases, plant roots have the highest Cd, and Cd content declines in the following order: roots > leaves > grains or seeds (Wagner, 1993). Also, the translocation of Cd from roots to shoots has been studied in several species, including tomato (Petit and Geijn, 1978), bean (Hardiman and Jacoby, 1984), maize (Yang et al., 1995), and wheat (Hart et al., 1998). The movement of Cd from roots to shoots is likely to occur via the xylem, driven by transpiration from the leaves (Salt et al., 1995). Cellular sequestration of Cd can greatly affect the level of free Cd in the cell and thus potentially influence the movement of Cd throughout the plant. One approach to detoxify Cd is to bind it to the cell wall (Nishizono et al., 1987). In addition, ionic Cd2+ concentrations in the cytosol can be regulated using at least two processes: Cd2+ binding to phytochelatins (Grill et al., 1985) and cellular compartmentalization, particularly in the vacuole (Cobbett, 2003). There is evidence that Cd can be transported across the tonoplast into the vacuole of oat root cells, both as free ions (Salt and Wagner, 1993) and as a complex with phytochelatins (Cobbett, 2003). In contrast, most of the Cd in the protoplasm is not in the form of free ionic Cd2+ but is combined with ligands, and the formation of compounds with low biological activity reduces Cd toxicity. Although numerous studies on the interaction between Cd and plants have been conducted over the past three decades, many aspects of Cd toxicity in plants remain unclear. The differing results may be attributed to the differences in the Cd concentrations applied, the kind of medium used, and the age of the plant when it was subjected to Cd treatments. Few scientists have reported the association of Cd subcellular distribution and the chemical forms with tolerance or sensitivity. Therefore, the objectives of this study were to investigate the effect of Cd on biomass production as well as the specific tolerance or sensitivity to and uptake mechanism of Cd, to characterize the influx of Cd from roots to shoots, and to determine the content, subcellular distribution, and chemical forms of Cd in wild-type and mutant rice (Oryza sativa L.) plants, which have the same genetic background.

The addition of Cd in solution significantly decreased the growth of the wild-type (Zhonghua 11) and mutant rice. The typical symptoms of Cd toxicity of rice plants included wilted leaves, growth inhibition, progressive chlorosis in certain leaves and leaf sheaths, and browned root systems, especially in the root tips, which are consistent with those reported in the literature (Das et al., 1997; Chugh and Sawhney, 1999). Howden et al. (1995) suggested that the brown pigment was probably a deposit of various metal-sulfide complexes. The symptoms of Cd toxicity were more pronounced in the mutant plants than the wild-type plants. The biomass per plant was reduced by 56.3% in the mutant and by 43.8% in the wild type (Table I).The RGR (relative growth rate) of the wild type was 1.5 times higher than that of the mutant (Table I). The RGR of the mutant rice plants was more retarded mainly because of the net assimilation rate (NAR) inhibition (data not shown). The biomass reduction in the mutant rice plants was attributed to the higher Cd content in roots (Fig. 1) and in the cell organelles of roots and leaves (Table II). The symptoms associated with nutrient deficiency in the leaves of the mutant rice plants indicated a growth inhibition because of a mineral imbalance, indicating that high Cd resulted in more serious damage to the mutant rice plants than the wild-type rice plants. To determine the sensitivity of plant parts to Cd toxicity, the dry matter of the roots, leaf sheathes, and leaves of the Cd-treated plants were compared with that of the control plants (Table I). With the Cd treatment, the dry weights of the roots, the leaf sheathes, and the leaves were 50% and 33%, 60% and 60%, and 60% and 40% in the wild-type and mutant rice plants, respectively, compared with those in the control plants. However, the dry weight of the whole plant was not statistically different between the two types without Cd treatment. The percentage of growth reduction was the greatest in the roots and was the least in the leaf sheaths, indicating that the root was the organ with the greatest sensitivity to Cd toxicity.Fig. 1 Cd contents (a) and accumulation (b) in roots, leaf sheaths, and leaves (dry weight) of wild-type (WT) and mutant rice plants under Cd treatment. Values are mean ± standard deviation (n = 4). The Cd contents in leaves, leaf sheaths, and roots of the wild type in the control were 0.1, 0.6, and 2.3 mg kg−1, and those of the mutant were 0.2, 0.3, and 1.4 mg kg−1, respectively. * indicates significant differences between the wild type and mutant rice plants at P ≤ 0.05.