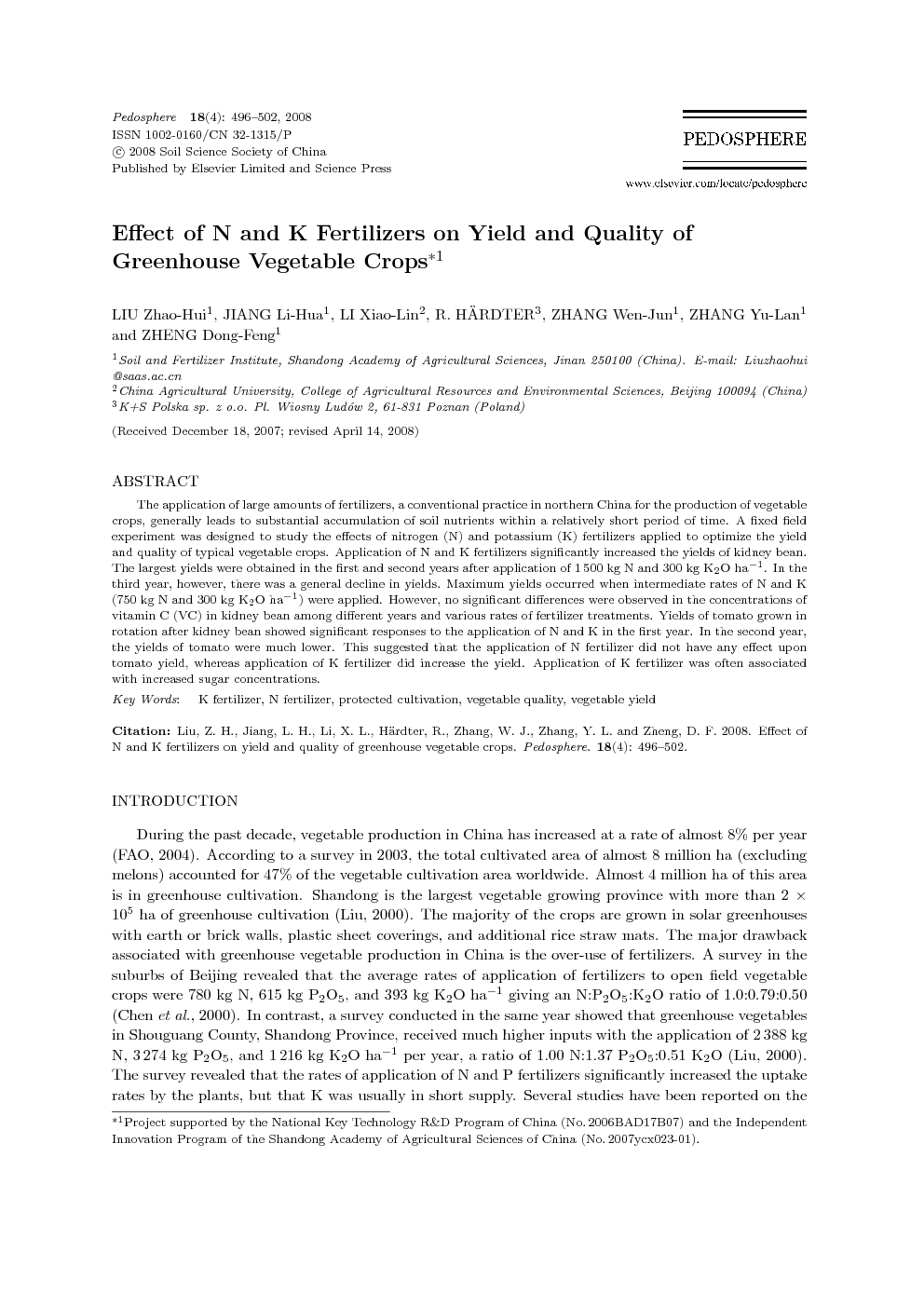 The application of large amounts of fertilizers, a conventional practice in northern China for the production of vegetable crops, generally leads to substantial accumulation of soil nutrients within a relatively short period of time. A fixed field experiment was designed to study the effects of nitrogen (N) and potassium (K) fertilizers applied to optimize the yield and quality of typical vegetable crops. Application of N and K fertilizers significantly increased the yields of kidney bean. The largest yields were obtained in the first and second years after application of 1 500 kg N and 300 kg K2O ha−1. In the third year, however, there was a general decline in yields. Maximum yields occurred when intermediate rates of N and K (750 kg N and 300 kg K2O ha−1) were applied. However, no significant differences were observed in the concentrations of vitamin C (VC) in kidney bean among different years and various rates of fertilizer treatments. Yields of tomato grown in rotation after kidney bean showed significant responses to the application of N and K in the first year. In the second year, the yields of tomato were much lower. This suggested that the application of N fertilizer did not have any effect upon tomato yield, whereas application of K fertilizer did increase the yield. Application of K fertilizer was often associated with increased sugar concentrations.

During the past decade, vegetable production in China has increased at a rate of almost 8% per year (FAO, 2004). According to a survey in 2003, the total cultivated area of almost 8 million ha (excluding melons) accounted for 47% of the vegetable cultivation area worldwide. Almost 4 million ha of this area is in greenhouse cultivation. Shandong is the largest vegetable growing province with more than 2 × 105 ha of greenhouse cultivation (Liu, 2000). The majority of the crops are grown in solar greenhouses with earth or brick walls, plastic sheet coverings, and additional rice straw mats. The major drawback associated with greenhouse vegetable production in China is the over-use of fertilizers. A survey in the suburbs of Beijing revealed that the average rates of application of fertilizers to open field vegetable crops were 780 kg N, 615 kg P2O5, and 393 kg K2O ha−1 giving an N:P2O5:K2O ratio of 1.0:0.79:0.50 (Chen et al., 2000). In contrast, a survey conducted in the same year showed that greenhouse vegetables in Shouguang County, Shandong Province, received much higher inputs with the application of 2 388 kg N, 3 274 kg P2O5, and 1 216 kg K2O ha−1 per year, a ratio of 1.00 N:1.37 P2O5:0.51 K2O (Liu, 2000). The survey revealed that the rates of application of N and P fertilizers significantly increased the uptake rates by the plants, but that K was usually in short supply. Several studies have been reported on thecharacteristics of soil under protected vegetable growing conditions (Xiao et al., 1999; Zhu et al., 2002; Kaplan et al., 2002; El et al., 2003; Yao et al., 2006), and the effect of potassium application on yields of vegetables and other crops (Majumdar et al., 2000; Sangakkara and Frehner, 2001; Balliu and Ibro, 2002; Chandra et al., 2003; Gent, 2004). There have also been numerous studies on inputs in open field vegetable cropping systems with the application of fertilizers, but little information exists on appropriate fertilizer requirements in protected vegetable cropping conditions. Until now, no detailed studies have been reported that provide a rational basis for recommendations on optimum use of fertilizer to achieve both high yield and quality. The objective of our study was to investigate the effects of different inputs of N and K to determine optimum application rates for two vegetable species typically grown in rotation under greenhouse conditions.