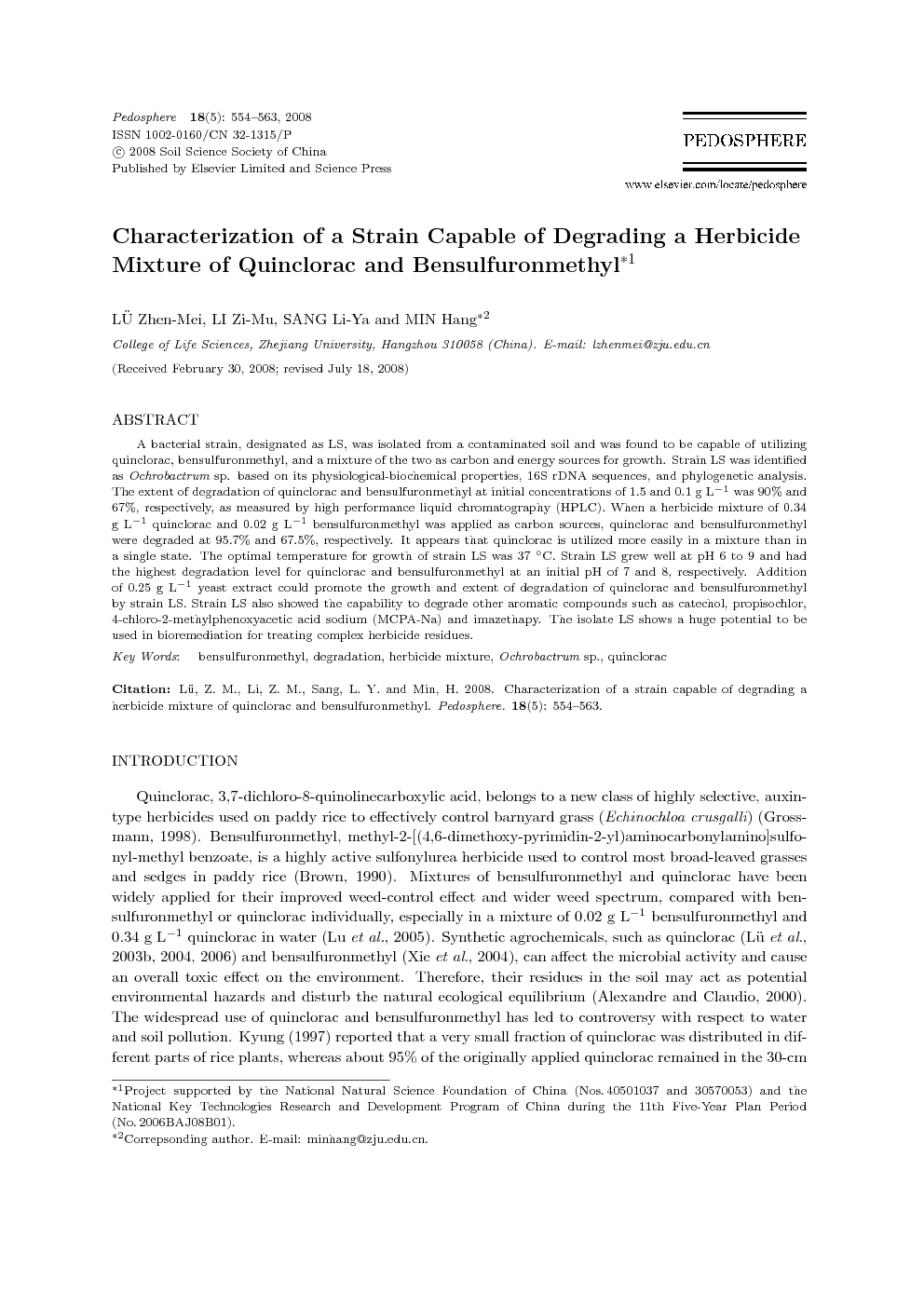 Quinclorac, 3,7-dichloro-8-quinolinecarboxylic acid, belongs to a new class of highly selective, auxintype herbicides used on paddy rice to effectively control barnyard grass (Echinochloa crusgalli) (Grossmann, 1998). Bensulfuronmethyl, methyl-2-[(4,6-dimethoxy-pyrimidin-2-yl)aminocarbonylamino]sulfonyl- methyl benzoate, is a highly active sulfonylurea herbicide used to control most broad-leaved grasses and sedges in paddy rice (Brown, 1990). Mixtures of bensulfuronmethyl and quinclorac have been widely applied for their improved weed-control effect and wider weed spectrum, compared with bensulfuronmethyl or quinclorac individually, especially in a mixture of 0.02 g L−1 bensulfuronmethyl and 0.34 g L−1 quinclorac in water (Lu et al., 2005). Synthetic agrochemicals, such as quinclorac (L¨u et al., 2003b, 2004, 2006) and bensulfuronmethyl (Xie et al., 2004), can affect the microbial activity and cause an overall toxic effect on the environment. Therefore, their residues in the soil may act as potential environmental hazards and disturb the natural ecological equilibrium (Alexandre and Claudio, 2000). The widespread use of quinclorac and bensulfuronmethyl has led to controversy with respect to water and soil pollution. Kyung (1997) reported that a very small fraction of quinclorac was distributed in different parts of rice plants, whereas about 95% of the originally applied quinclorac remained in the 30-cmsurface layer of soil after harvest. Okamoto (1998) found that the concentration of bensulfuronmethyl in rivers and lakes of Japan was as high as 0.1–2.3 mg L−1. The concentration of bensulfuronmethyl reached 0.02 mg L−1 in groundwater near paddy rice fields in Italy (Wei et al., 1998). Bioremediation, based on certain species of microorganisms, is a cheap and effective way to decontaminate pesticide in contaminated soils and water. There are many successful examples of in-situ bioremediation of pesticide residues by microorganisms. At present, only one quinclorac degradation strain has been reported (L¨u et al., 2004), and the degradation of bensulfuronmethyl is also rarely reported (Brusa et al., 2001; Zhu et al., 2005). However, no information on the biodegradation of the mixture of quinclorac and bensulfuronmethyl has been published in the literature. Therefore, understanding the degraders of herbicide mixtures, as well as the dynamics of biodegradation, is of great importance. The purpose of the present work was to study the phylogenetic and degradation characterization of a pure bacterium capable of high degradation of the herbicide mixture.