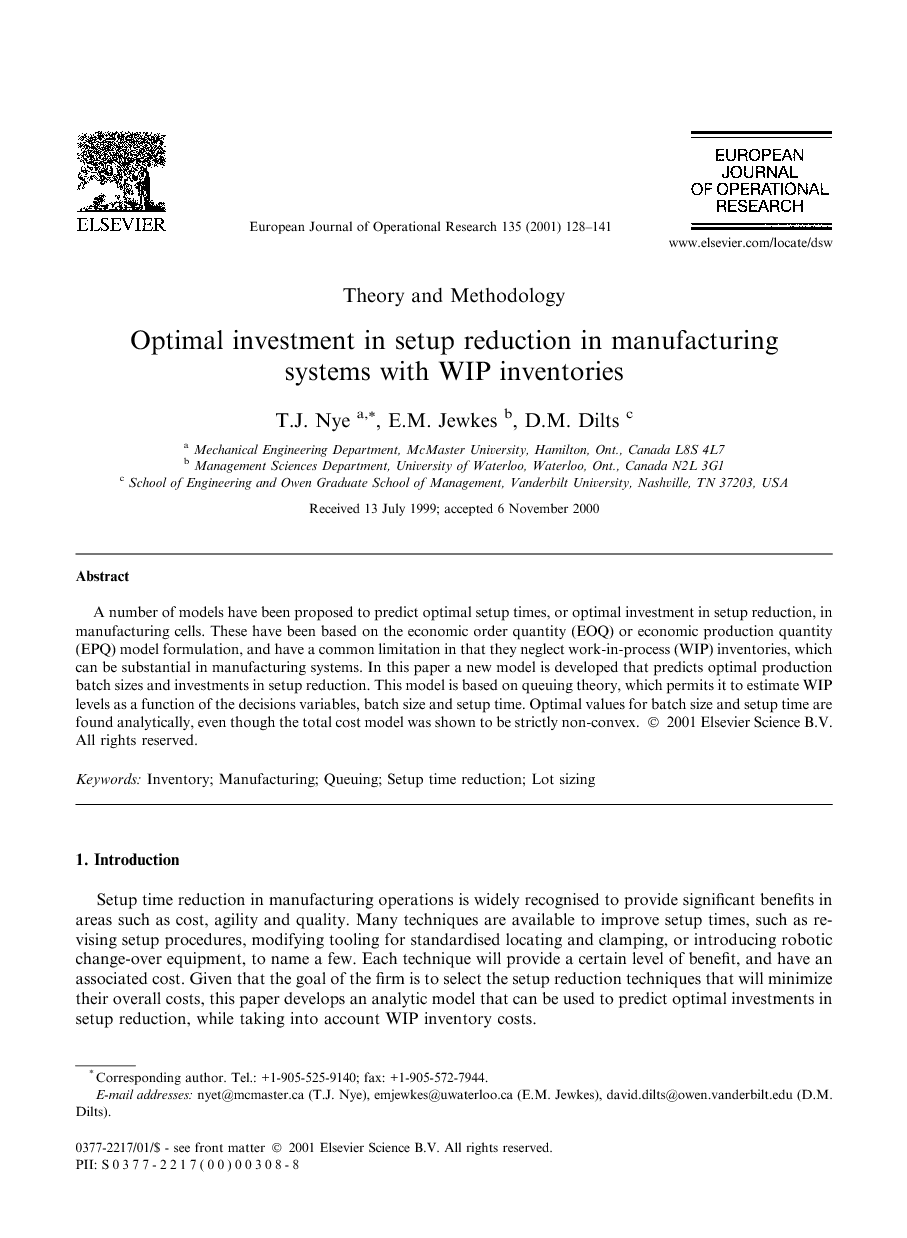 A number of models have been proposed to predict optimal setup times, or optimal investment in setup reduction, in manufacturing cells. These have been based on the economic order quantity (EOQ) or economic production quantity (EPQ) model formulation, and have a common limitation in that they neglect work-in-process (WIP) inventories, which can be substantial in manufacturing systems. In this paper a new model is developed that predicts optimal production batch sizes and investments in setup reduction. This model is based on queuing theory, which permits it to estimate WIP levels as a function of the decisions variables, batch size and setup time. Optimal values for batch size and setup time are found analytically, even though the total cost model was shown to be strictly non-convex.

This paper describes the development of a new analytic model for the investment in setup time reduction in a manufacturing system. A major contribution of this model is that it captures the costs of work-in-progress (WIP) inventory, a major limitation of previous models in this area. Although the total relevant cost function for the manufacturing cell with WIP inventories was proved strictly non-convex, analytic expressions were developed for the batch size and setup time that minimise costs. As a consequence of the non-convex total cost function, two distinct optimal solutions were found. Either no investment should be made and an optimal batch size used, or enough investment should be made in setup reduction to reduce the optimal batch size to a single unit. This result, derived for the specific case of the linear investment function, was shown to represent the behaviour of the system under various non-convex and mildly convex investment functions. Only use of a strongly convex investment function will lead to potential optimal solutions between the extremes of no- or full-investment. Obtaining analytic results under the condition of a strongly convex investment function, however, remains an open area of research. Through the course of this work, additional research opportunities were found. For instance, although many stochastic models have been developed of manufacturing systems (e.g., see Buzacott and Shanthikumar, 1993), little has been published on the stochastic characteristics of typical setup and production times. This information would be very useful in determining which model forms are most appropriate in constructing cost models such as the one presented in this paper. Two areas of potential extension for this model are to consider multi-product/multi-stage production systems and to consider queuing-based lot sizing models for manufacturing. The latter extension has been developed to some extent in this paper. To be specific, of the two optimal cases derived here, the first was based on no investment in setup reduction, only batch size optimisation Eq. (16). Thus, optimal batch sizes can be found analytically for systems with WIP inventories, although more investigation needs to be performed.