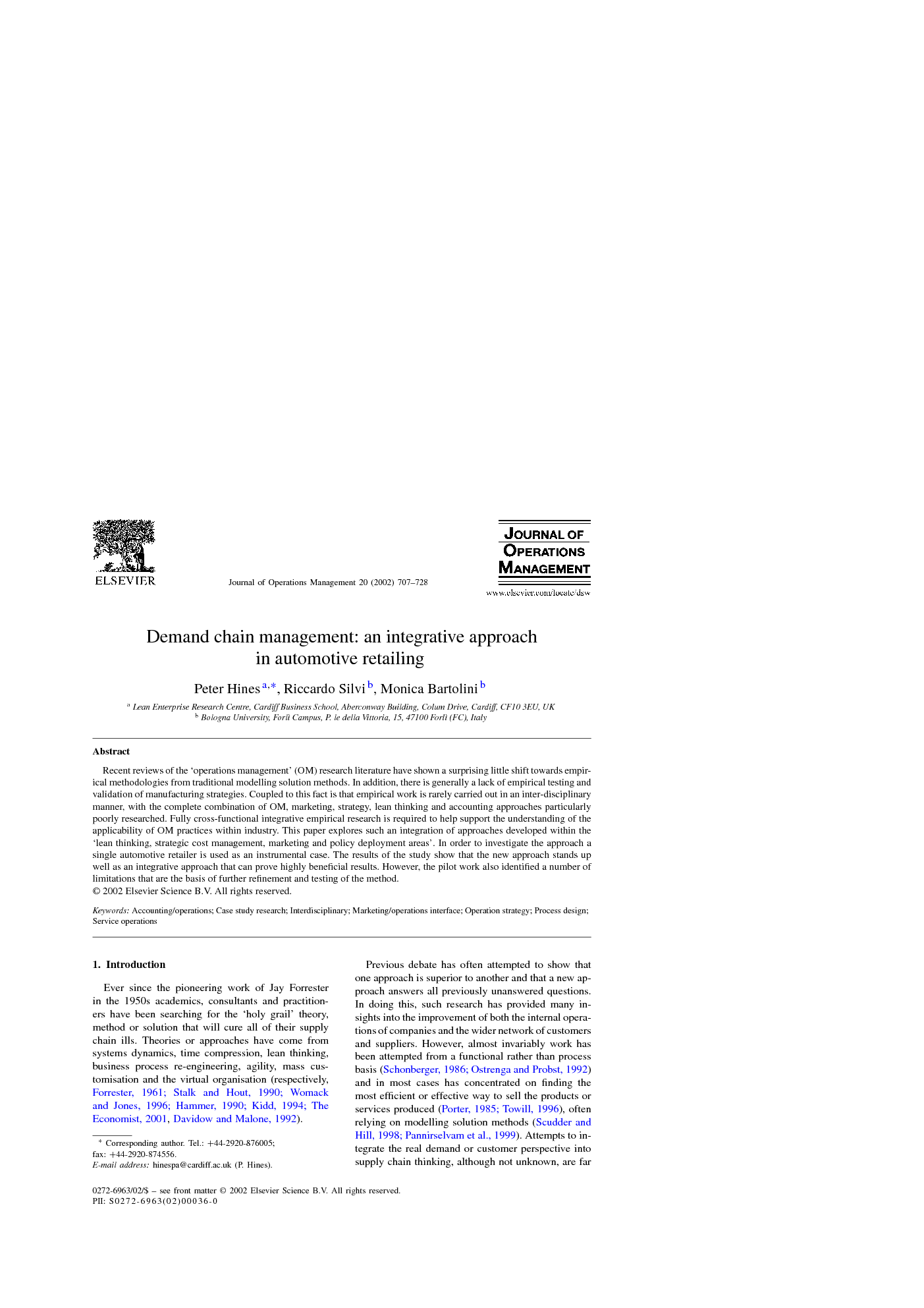 Recent reviews of the ‘operations management’ (OM) research literature have shown a surprising little shift towards empirical methodologies from traditional modelling solution methods. In addition, there is generally a lack of empirical testing and validation of manufacturing strategies. Coupled to this fact is that empirical work is rarely carried out in an inter-disciplinary manner, with the complete combination of OM, marketing, strategy, lean thinking and accounting approaches particularly poorly researched. Fully cross-functional integrative empirical research is required to help support the understanding of the applicability of OM practices within industry. This paper explores such an integration of approaches developed within the ‘lean thinking, strategic cost management, marketing and policy deployment areas’. In order to investigate the approach a single automotive retailer is used as an instrumental case. The results of the study show that the new approach stands up well as an integrative approach that can prove highly beneficial results. However, the pilot work also identified a number of limitations that are the basis of further refinement and testing of the method.

Ever since the pioneering work of Jay Forrester in the 1950s academics, consultants and practitioners have been searching for the ‘holy grail’ theory, method or solution that will cure all of their supply chain ills. Theories or approaches have come from systems dynamics, time compression, lean thinking, business process re-engineering, agility, mass customisation and the virtual organisation (respectively, Forrester, 1961, Stalk and Hout, 1990, Womack and Jones, 1996, Hammer, 1990, Kidd, 1994 and The Economist, 2001, Davidow and Malone, 1992). Previous debate has often attempted to show that one approach is superior to another and that a new approach answers all previously unanswered questions. In doing this, such research has provided many insights into the improvement of both the internal operations of companies and the wider network of customers and suppliers. However, almost invariably work has been attempted from a functional rather than process basis (Schonberger, 1986 and Ostrenga and Probst, 1992) and in most cases has concentrated on finding the most efficient or effective way to sell the products or services produced (Porter, 1985 and Towill, 1996), often relying on modelling solution methods (Scudder and Hill, 1998 and Pannirselvam et al., 1999). Attempts to integrate the real demand or customer perspective into supply chain thinking, although not unknown, are far too rare (Christopher, 1992, Womack and Jones, 1996 and Archer and Wesolowsky, 1996).

The main conclusion from the work is that the integrated empirical research method applied to this case company has, on balance, proved to be a success. It was robust as an integrated methodology, as a practical toolkit and as a contingency approach. The integration of ‘lean thinking, strategic cost management, marketing and policy deployment’ has, therefore, proved to be effective at both the strategic and operational levels. However, this initial work has suffered from a number of limitations, not least its time consuming nature. Further research is required in order to try to correct, or at least restrict, these limitations. This should include further integration of other elements of ‘strategic cost management’, such as cost driver analysis (Shank and Govindarajan, 1993a and Shank and Govindarajan, 1993b). Also, of benefit would be longitudinal research on the case firm described here to observe whether they can fulfil the potential of their improvement plans. In addition, further testing of the approach in other automotive retailers, industrial sectors and outside the UK will help to gauge whether the approach can overcome cultural and sectoral institutional barriers (DiMaggio and Powell, 1983, Hofstede and Bond, 1988 and Whitley, 1992). Once the approach can be further streamlined it can also be applied to a wider supply chain setting.