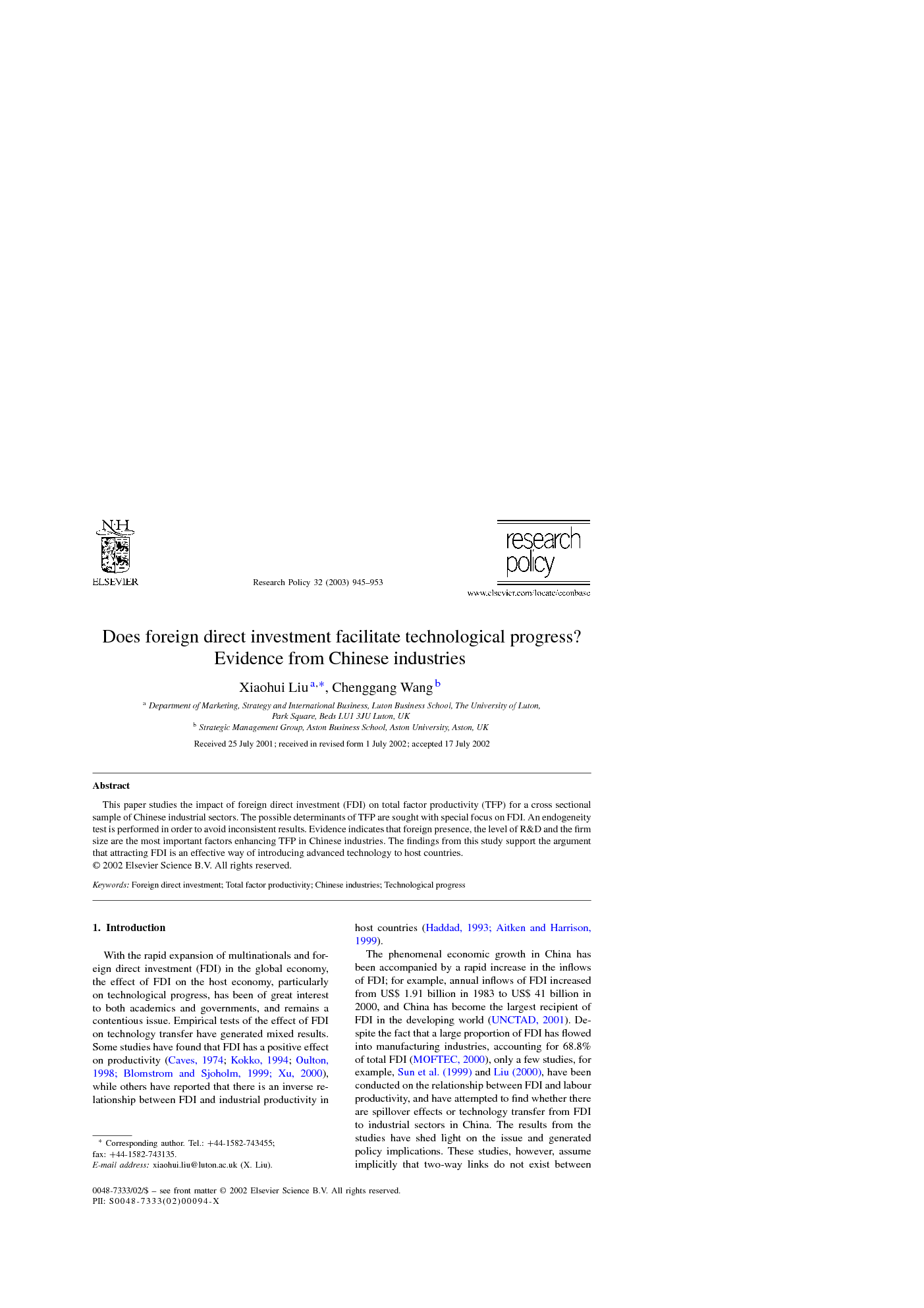 This paper studies the impact of foreign direct investment (FDI) on total factor productivity (TFP) for a cross sectional sample of Chinese industrial sectors. The possible determinants of TFP are sought with special focus on FDI. An endogeneity test is performed in order to avoid inconsistent results. Evidence indicates that foreign presence, the level of R&D and the firm size are the most important factors enhancing TFP in Chinese industries. The findings from this study support the argument that attracting FDI is an effective way of introducing advanced technology to host countries

With the rapid expansion of multinationals and foreign direct investment (FDI) in the global economy, the effect of FDI on the host economy, particularly on technological progress, has been of great interest to both academics and governments, and remains a contentious issue. Empirical tests of the effect of FDI on technology transfer have generated mixed results. Some studies have found that FDI has a positive effect on productivity (Caves, 1974; Kokko, 1994; Oulton, 1998, Blomstrom and Sjoholm, 1999 and Xu, 2000), while others have reported that there is an inverse relationship between FDI and industrial productivity in host countries (Haddad, 1993 and Aitken and Harrison, 1999). The phenomenal economic growth in China has been accompanied by a rapid increase in the inflows of FDI; for example, annual inflows of FDI increased from US$ 1.91 billion in 1983 to US$ 41 billion in 2000, and China has become the largest recipient of FDI in the developing world (UNCTAD, 2001). Despite the fact that a large proportion of FDI has flowed into manufacturing industries, accounting for 68.8% of total FDI (MOFTEC, 2000), only a few studies, for example, Sun et al. (1999) and Liu, 2000 and Liu, 2000, have been conducted on the relationship between FDI and labour productivity, and have attempted to find whether there are spillover effects or technology transfer from FDI to industrial sectors in China. The results from the studies have shed light on the issue and generated policy implications. These studies, however, assume implicitly that two-way links do not exist between FDI and labour productivity in a sector, and that productivity has little impact on the investment decisions of multinational enterprises (MNEs). Comparatively little empirical research has been conducted on the relationship between FDI and total factor productivity (TFP) in Chinese industries. Labour productivity is a partial productivity in which only one factor, labour, is considered. It is difficult to distinguish between labour productivity being high in a sector because of a high degree of technological efficiency or because of a large stock of physical capital, given that labour productivity fails to capture all of the influences on productivity. TFP evaluates technological progress, and constitutes a measure of the efficiency with which all the factors of production are employed.

This paper empirically studies the effect of FDI on TFP for a cross-sectional sample of Chinese industrial sectors. TFP is estimated from a production function involving physical capital and labour forces. The possible determinants of TFP are sought, with special focus on FDI. The results from the production function suggest that physical capital and labour force are the main determinants of industrial production, underlining the fact that both physical capital and labour inputs are important to the output level in industrial sectors. Based on TFP function, it is also found that the foreign presence, domestic R&D and the firm size are the most important factors enhancing TFP in Chinese industries. We view the positive effect of FDI on TFP as evidence which indicates that the FDI inflow is not merely a source of capital, it is also a conduit for technology transfer. The effect of FDI on Chinese industries is beyond that of a simple import of capital into the country, as found in the case study of the machine tool and electronic industry (Wang and Zhou, 1999). Human capital is found to benefit TFP only when the interactions between this variable, the foreign presence and R&D are taken into account, implying that the higher the level of FDI presence and R&D, the more productive human capital becomes. The findings offer a number of implications for policymakers. First, Chinese industries should continue to attract high quality and technologically intensive FDI, and provide incentives for MNEs to upgrade production at their sites in China. The government should build on an economic environment conducive for MNEs to introduce advanced technology and conduct R&D activities in Chinese industries. It is imperative for China to enhance TFP through spillovers from FDI as it is an effective way of improving technological progress. Second, the government needs to take the lead in fostering innovation in industrial sectors by allocating more resources to support domestic R&D activities. It is crucial for the government to adopt a combined strategy which obtains technology transfer from FDI, while at the same time moves towards developing Chinese industries’ technological capabilities since technological progress is the driving force sustaining economic growth in the long run. This requires effort on the part of the industries as well as support from the government. Finally, China’s accession to the WTO will create great opportunities that will further encourage inward FDI if foreign investors can be granted WTO’s principle of national treatment. In addition, a fully transparent system for regulating FDI will need to be established together with effective protection of intellectual property rights.