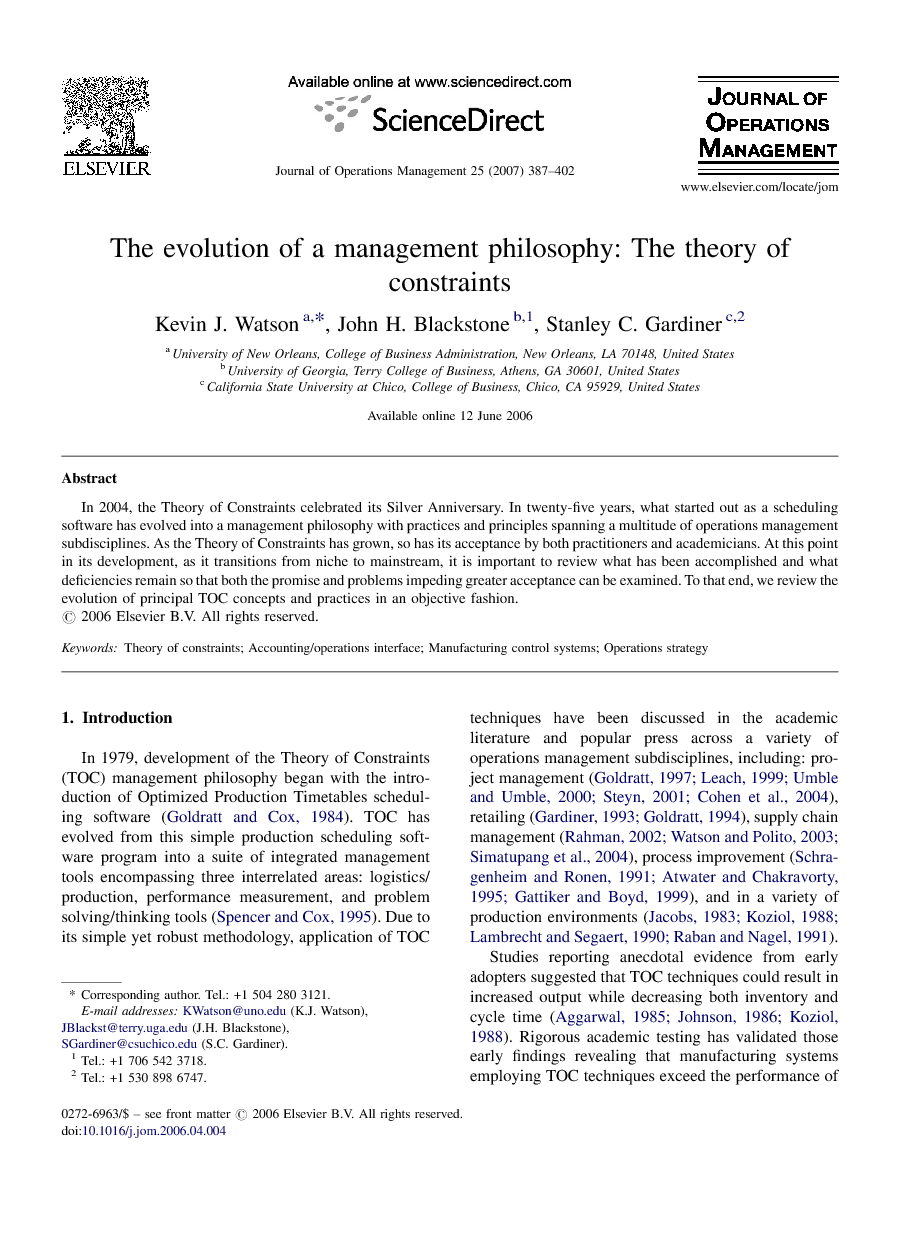 In 2004, the Theory of Constraints celebrated its Silver Anniversary. In twenty-five years, what started out as a scheduling software has evolved into a management philosophy with practices and principles spanning a multitude of operations management subdisciplines. As the Theory of Constraints has grown, so has its acceptance by both practitioners and academicians. At this point in its development, as it transitions from niche to mainstream, it is important to review what has been accomplished and what deficiencies remain so that both the promise and problems impeding greater acceptance can be examined. To that end, we review the evolution of principal TOC concepts and practices in an objective fashion.

In 1979, development of the Theory of Constraints (TOC) management philosophy began with the introduction of Optimized Production Timetables scheduling software (Goldratt and Cox, 1984). TOC has evolved from this simple production scheduling software program into a suite of integrated management tools encompassing three interrelated areas: logistics/production, performance measurement, and problem solving/thinking tools (Spencer and Cox, 1995). Due to its simple yet robust methodology, application of TOC techniques have been discussed in the academic literature and popular press across a variety of operations management subdisciplines, including: project management (Goldratt, 1997, Leach, 1999, Umble and Umble, 2000, Steyn, 2001 and Cohen et al., 2004), retailing (Gardiner, 1993 and Goldratt, 1994), supply chain management (Rahman, 2002, Watson and Polito, 2003 and Simatupang et al., 2004), process improvement (Schragenheim and Ronen, 1991, Atwater and Chakravorty, 1995 and Gattiker and Boyd, 1999), and in a variety of production environments (Jacobs, 1983, Koziol, 1988, Lambrecht and Segaert, 1990 and Raban and Nagel, 1991).

Before discussing what appears to be the emergence of a sixth era in the evolution of the Theory of Constraints, we believe that it is important to review deficiencies with the techniques developed during the previous five eras. This is done in the vein of constructive criticism, so that problems impeding greater acceptance of TOC can be more clearly examined and addressed. If TOC is to gain the elusive mainstream acceptance its proponents and creator believe it deserves, TOC researchers and practitioners will need to address these deficiencies in addition to pointing to real world successes.