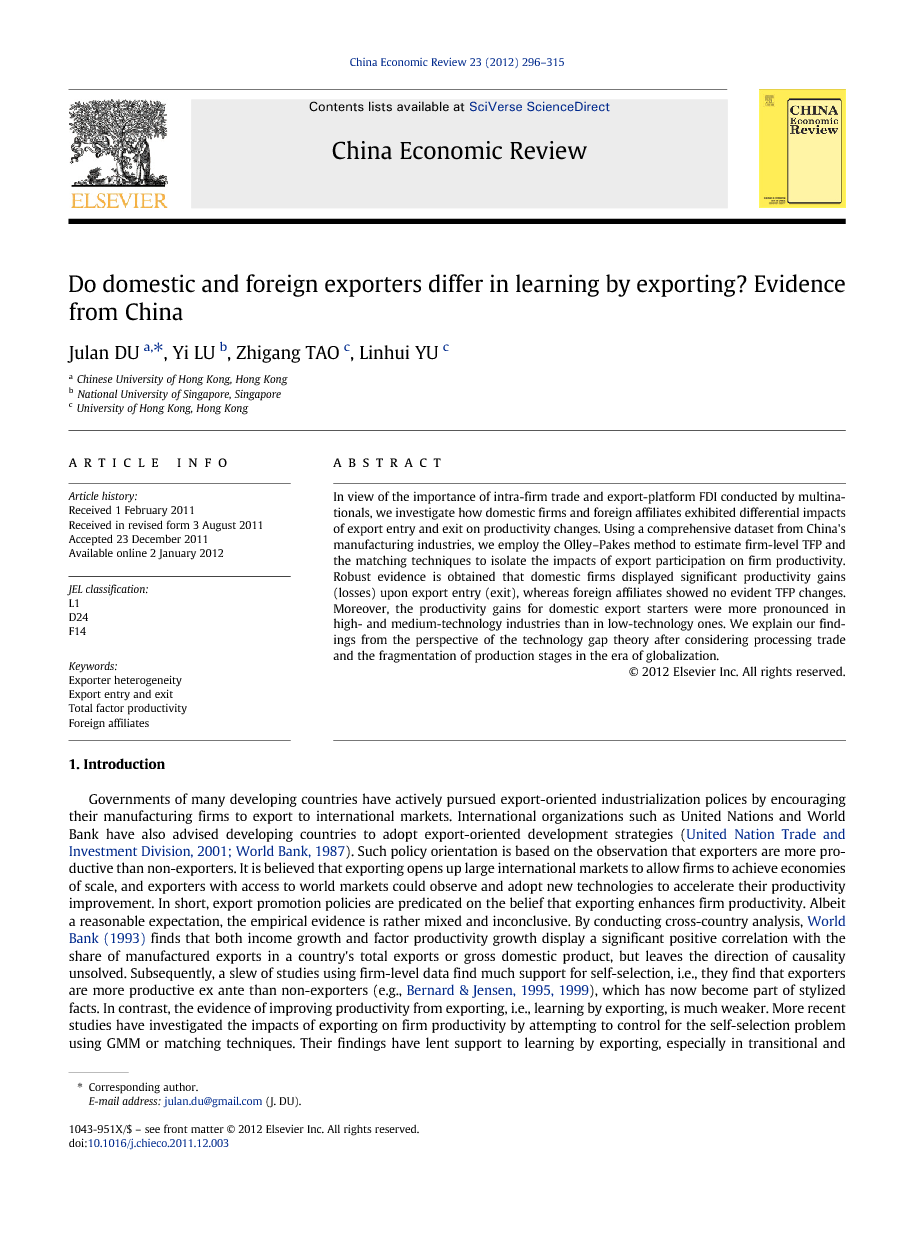 In view of the importance of intra-firm trade and export-platform FDI conducted by multinationals, we investigate how domestic firms and foreign affiliates exhibited differential impacts of export entry and exit on productivity changes. Using a comprehensive dataset from China's manufacturing industries, we employ the Olley–Pakes method to estimate firm-level TFP and the matching techniques to isolate the impacts of export participation on firm productivity. Robust evidence is obtained that domestic firms displayed significant productivity gains (losses) upon export entry (exit), whereas foreign affiliates showed no evident TFP changes. Moreover, the productivity gains for domestic export starters were more pronounced in high- and medium-technology industries than in low-technology ones. We explain our findings from the perspective of the technology gap theory after considering processing trade and the fragmentation of production stages in the era of globalization.

Governments of many developing countries have actively pursued export-oriented industrialization polices by encouraging their manufacturing firms to export to international markets. International organizations such as United Nations and World Bank have also advised developing countries to adopt export-oriented development strategies (United Nation Trade and Investment Division, 2001 and World Bank, 1987). Such policy orientation is based on the observation that exporters are more productive than non-exporters. It is believed that exporting opens up large international markets to allow firms to achieve economies of scale, and exporters with access to world markets could observe and adopt new technologies to accelerate their productivity improvement. In short, export promotion policies are predicated on the belief that exporting enhances firm productivity. Albeit a reasonable expectation, the empirical evidence is rather mixed and inconclusive. By conducting cross-country analysis, World Bank (1993) finds that both income growth and factor productivity growth display a significant positive correlation with the share of manufactured exports in a country's total exports or gross domestic product, but leaves the direction of causality unsolved. Subsequently, a slew of studies using firm-level data find much support for self-selection, i.e., they find that exporters are more productive ex ante than non-exporters (e.g., Bernard and Jensen, 1995 and Bernard and Jensen, 1999), which has now become part of stylized facts. In contrast, the evidence of improving productivity from exporting, i.e., learning by exporting, is much weaker. More recent studies have investigated the impacts of exporting on firm productivity by attempting to control for the self-selection problem using GMM or matching techniques. Their findings have lent support to learning by exporting, especially in transitional and developing countries (e.g., Blalock & Gertler, 2004, for the case of Indonesia; Van Biesebroeck, 2005, for the case of nine sub-Saharan African countries; De Loecker, 2007, for the case of Slovenia; Trofimenko, 2008, and Fernandes & Isgut, 2009, for the case of Colombia; Ma & Zhang, 2008, and Yang & Mallick, 2010, for the case of China).1

Whether exporting promotes firm productivity is a central issue in the assessment of the effectiveness of export-promotion development policy. Unfortunately, it is an unresolved issue. Various studies in the literature have produced different findings. Though some studies such as Van Biesebroeck (2005) and De Loecker (2007) find that exporting promoted firm productivity in developing economies (e.g., Sub-Saharan countries and Slovenia), the majority of studies (e.g., Bernard and Jensen, 1999, Clerides et al., 1998 and Delgado et al., 2002) fail to detect significant learning by exporting effects, especially in industrialized countries.