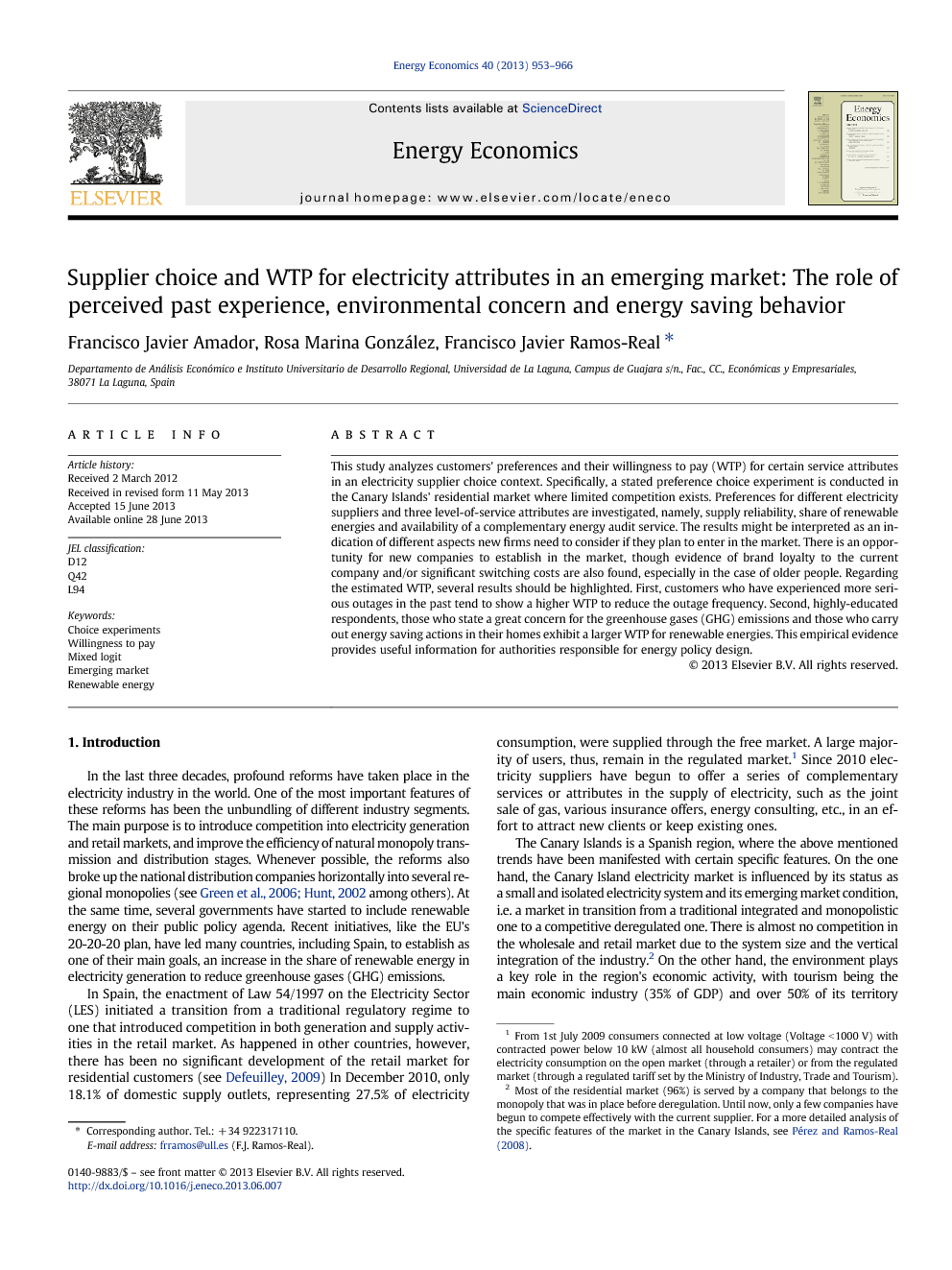 This study analyzes customers' preferences and their willingness to pay (WTP) for certain service attributes in an electricity supplier choice context. Specifically, a stated preference choice experiment is conducted in the Canary Islands' residential market where limited competition exists. Preferences for different electricity suppliers and three level-of-service attributes are investigated, namely, supply reliability, share of renewable energies and availability of a complementary energy audit service. The results might be interpreted as an indication of different aspects new firms need to consider if they plan to enter in the market. There is an opportunity for new companies to establish in the market, though evidence of brand loyalty to the current company and/or significant switching costs are also found, especially in the case of older people. Regarding the estimated WTP, several results should be highlighted. First, customers who have experienced more serious outages in the past tend to show a higher WTP to reduce the outage frequency. Second, highly-educated respondents, those who state a great concern for the greenhouse gases (GHG) emissions and those who carry out energy saving actions in their homes exhibit a larger WTP for renewable energies. This empirical evidence provides useful information for authorities responsible for energy policy design.

Deregulation and the introduction of competition in the electricity industry in many countries have led companies to persistently pursue customer satisfaction in the retail market. The knowledge of customers' preferences and WTP is key information for suppliers in order to analyze the retail market development, and for governments, to design energy policies. In this study, we analyze these issues in an emerging market situation. Specifically, a stated preference electricity company choice experiment was conducted in the Canary Islands' residential market, an emerging electricity market where the environment plays a key role in the economic activity. As a novelty in the research area on energy demand, the experimental design combines a reference alternative, labeled alternatives and efficient design. The study provides valuable information on the likelihood of switching supplier in a market where few have exercised this option. Likewise, unlike previous studies on this subject, preferences for the electricity supplier and WTP for service attributes are examined considering additional factors, such as perceived past experience with the current supplier, perceived importance of last outage experienced at home, energy-saving habits or the level of concern about the GHG emissions stated by households. The results could be very useful for electricity systems with similar geographic and market conditions. The results obtained on supplier choice allow us to draw three conclusions: • Ceteris paribus, 50.7% of respondents prefer their current supplier, 40.1% prefer another supplier and only 9.2% prefer a company from another industry. Thus, new companies could enter the retail market even without improving significantly the level of service provided by the current supplier. • However, the majority of individuals who rate the service provided by current supplier highly would not change supplier (63%), and also a significant portion of those who rate a competing company highly (44%) would stay with their current supplier. Therefore, there is evidence of significant switching costs and/or brand loyalty to the current supplier. • The effect of brand loyalty on the current company and/or the perceived switching cost increase with the age of the customer. With respect to the WTP obtained, we highlight the following findings: • WTPs for all of the attributes increase with household income and their values are in the line of those obtained in the literature, which indicate that our specific study context does not affect these values. • Customers place a high value on having fewer outages and on these to be of short duration. • On average, individuals are willing to pay for an energy audit service with shared savings, although this would only be a small amount representing barely 2% of their monthly electricity bill. • Respondents with university studies are also more willing to pay for renewable energy. Specifically, regarding the new factors analyzed and their influence on the WTP for service attributes, the main results lead us to conclude that: • The perceived past experience of customers significantly affects the WTP for reducing power outages. We found evidence of a systematic variation in the preferences for outage frequency, in that the doubling of the WTP could be explained by respondents' experience in terms of the severity of power outages that they state having suffered in the past. • Customers who state having an active energy-saving behavior are those who attach a higher value to the introduction of renewable energy in the generation of electricity. In fact, these individuals exhibit a WTP that is up to four times higher than those who do not save energy. Also, a greater WTP for renewable energy was clearly evidenced in individuals who claimed to be concerned with GHG. These results should be interpreted as an indication of different aspects new firms need to consider if they enter the market. Specifically, it is possible to compete by offering services connected with the different attributes studied. However, they would have to deal with customer loyalty to the current supplier, as well as customers' costs to switch suppliers. Our results on the WTP are in line with those obtained in other studies conducted in other contexts and with different methodologies. One important fact is that the aggregated WTP for renewable energy would cover less than 50% of the expenditure required to fund the goals for these energy sources listed in the energy plan currently in effect. Therefore, the regional objectives in the use of renewable electricity generation cannot be achieved by using only market mechanisms as found by Bollino (2009), Batley et al. (2001) and Scarpa and Willis (2010) and Ek (2005). Furthermore, as it has been shown, the concern for GHG and energy-saving action behavior are key factors in influencing the WTP for renewable energy; thus, all policies that affect these two factors would lead to greater financing to achieve greater penetration of renewable energy throughout the market. For example, information campaigns about rational energy use and promoting awareness of environmental problems in the generation of electricity. Finally, other avenues for further research can be identified. It would be useful to provide more empirical evidence on these issues by replicating this study in other electricity systems where geographic and market conditions allow us to make accurate comparisons. Thus, we could test whether the special circumstances arising from the Canarian economy and geographical location have a decisive effect on the WTP for service attributes and on choice of supplier. Another extension includes a more accurate assessment of switching costs by studying a group of customers who have changed suppliers. Future research should also consider both groups of users, those who have switched and those who have not. This would also confirm whether an inertia effect exists involving previous suppliers, as has been shown in other sectors.