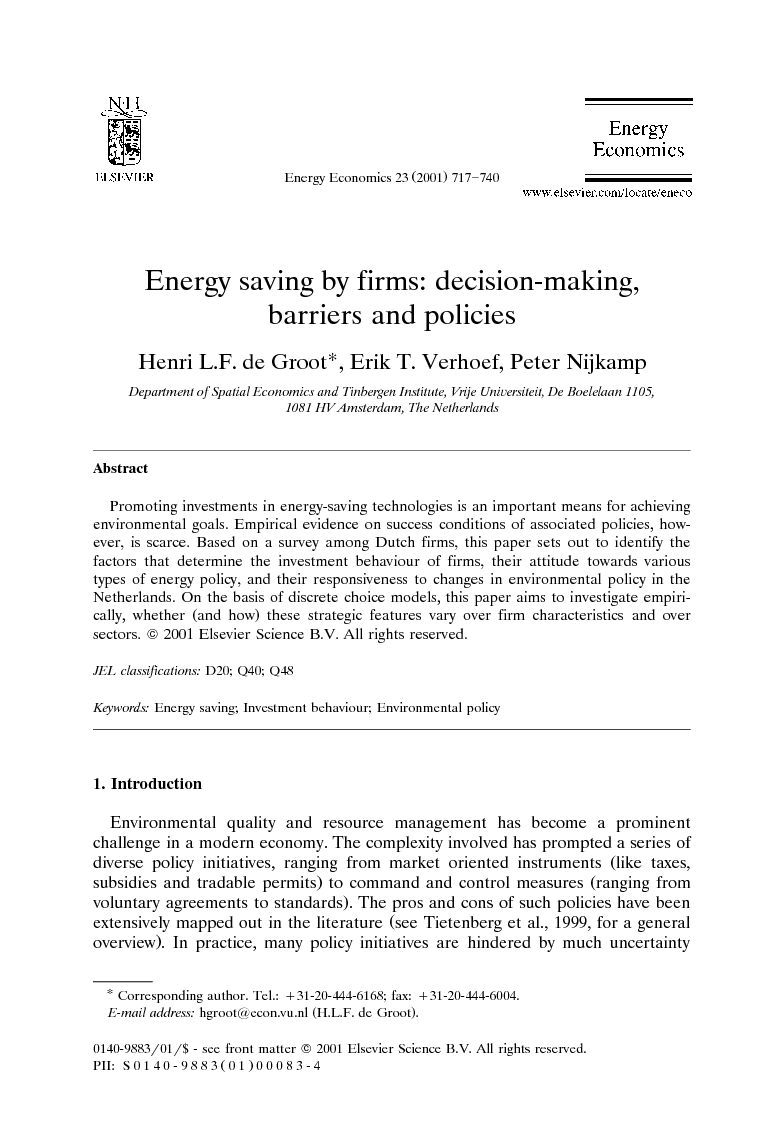 Promoting investments in energy-saving technologies is an important means for achieving environmental goals. Empirical evidence on success conditions of associated policies, however, is scarce. Based on a survey among Dutch firms, this paper sets out to identify the factors that determine the investment behaviour of firms, their attitude towards various types of energy policy, and their responsiveness to changes in environmental policy in the Netherlands. On the basis of discrete choice models, this paper aims to investigate empirically, whether (and how) these strategic features vary over firm characteristics and over sectors.

Environmental quality and resource management has become a prominent challenge in a modern economy. The complexity involved has prompted a series of diverse policy initiatives, ranging from market oriented instruments (like taxes, subsidies and tradable permits) to command and control measures (ranging from voluntary agreements to standards). The pros and cons of such policies have been extensively mapped out in the literature (see Tietenberg et al., 1999, for a general overview). In practice, many policy initiatives are hindered by much uncertainty (see, for example, Roberts and Spence, 1976, and Adar and Griffin, 1976), so that a clear choice for price-based instruments — as opposed to quantity-based instruments — is difficult to make. Consequently, we have seen a formidable variation — over time and among countries — in the application of policy instruments and measures. This also holds for a country with a traditionally strict environmental policy, The Netherlands. Although with varying degrees of priority, environmental problems have always been high on the Dutch policy agenda. In recent years, Dutch environmental policy has been relatively successful, at least in the reduction of emissions of some pollutants. Despite a strong economic growth performance, many emissions of pollutants have been reduced. This improvement is to a large extent the result of a more intensive use of environmentally-friendly technologies, the adoption of which was stimulated by the imposition of clear policy objectives, task requirements, and voluntary agreements. Despite these improvements, several serious problems still remain. The most pressing problems in the Dutch situation are associated with climate change, noise, and eutrofication. Additional policies will be required to reach the targets that have been set in the so-called NMP4 (the most recent Dutch national environmental plan). In this plan, the Dutch government opts for more intensive use of voluntary agreements, but also for using and exploiting market-based incentive mechanisms. The general goal is to better reflect environmental decay in prices so as to encourage behavioural changes. Fiscal measures should result in product prices that more properly mirror the (marginal) social costs associated with the use of energy. These additional measures should result in adjustments in producers’ and consumers’ behaviour, product and process innovations, and a lower use of scarce environmental resources. In order to assess and judge the desirability, the effectiveness and the acceptability of such proposed policy changes, it is of critical importance to obtain clear empirical insights into the way investment decisions in general, and energy use in particular, are being made within firms, how these decisions can be influenced by governance strategies, how firms are likely to respond to various possible policies, and how they judge the feasibility and acceptability of these measures. Against this background, the present paper will address the potentials and impediments of energy-saving strategies among firms by a series of empirical results originating from the analysis of a survey among Dutch firms, dedicated to success conditions for energy savings. Detailed systematic empirical studies at a sector or firm level are rather scarce in the Netherlands. Some years ago, Velthuijsen (1993) and Gillissen et al. (1995) performed a questionnaire among firms, in which they also focused on energy use and related investments. Our research broadens their scope in that we do not only focus on investment behaviour, but also on the stated response to and attitudes towards a set of specified policy instruments. Our new data set allows in addition for a more detailed analysis of the role of various types of uncertainty in investment decisions which, according to investment theories as developed by, for example, Dixit and Pindyck (1994), may be a major explanatory factor for seemingly irrationally high revealed internal discount rates in investment evaluation (see, for example, Johnson, 1994). It thereby aims at broadening our understanding of decision-making on energy use in companies and energy gaps as have been widely documented in the literature. The ‘background variables’ in our study, however, that are necessary for statistical analysis, are largely similar to those in the above mentioned studies. The survey was held in the spring of 1998 among Dutch firms. These firms were randomly selected from the register of the Chambers of Commerce and were more or less equally distributed among the most energy-intensive sectors of the Dutch economy, namely the chemical industry, basic metals, metals and machinery, food, paper, horticulture, construction materials, and textiles. The extensive survey contained a detailed set of questions about energy use, investments, the firm's competitive position in the market, internal decision making, its attitude towards and adoption of energy-saving technologies, as well as its attitude towards and responsiveness to Dutch environmental policy. The statistical results also incorporate a body of empirical knowledge on the expected effects and acceptability of energy policies, two major determinants for the choice of environmental and energy policies. In this paper we present the results of the above survey and investigate how investment behaviour, attitudes and responsiveness towards economic policy, as well as barriers to the adoption of readily available energy-efficient technologies, vary over sectors and with firm characteristics. Our analysis will be presented in five separate sections. Section 2 discusses the survey and gives a description of the firms and sectors included in the sample. Section 3 considers the investment behaviour of firms, along with the perceived barriers to investing in cost effective energy-saving technologies (in the context of the so-called energy efficiency paradox). In Section 4, attention is shifted to the firms’ stated reactions in response to an increase in energy taxes on a national level (with no rebatements). Section 5 discusses the attitudes towards environmental policies in The Netherlands. Section 6 contains an evaluation and presents the policy conclusions emerging from our empirical analysis.

This paper has presented and interpreted the results of a survey among Dutch firms. The survey has provided us with a unique data set that to obtain a better understanding of how investment decisions are being made, how they vary between heterogeneous firms and sectors, and how they can potentially be influenced by environmental policy. These insights are important for the development of efficient and acceptable environmental policies in a small open economy like the Dutch one. From our investigation, we may conclude that energy saving increasingly becomes an integrated and normal part of the business operation of Dutch firms. The economic potential for cost savings is the most important driving force behind investment decisions. The existence of other, more attractive, investment opportunities and the incomplete depreciation of the existing capital stock are important impediments for not (yet) investing in energy-saving technologies. A more strict environmental policy is acceptable for most firms, provided that this measure will not negatively affect profitability and the competitive position of firms. Taxes, especially with tax-recycling schemes and carried out in a wider international context, are even preferred by to detailed policy guidelines on how to achieve policy goals. We found strong evidence for considering sector- and firm-specific factors in explaining investment behaviour and responsiveness to and acceptability of policy measures. The latter result is of importance for environmental policy making since it constrains the applicability and desirability of generic policies. Especially firm size, energy intensity and competitive position were found to be important distinguishing factors in explaining differences in behaviour and attitude towards policy. A challenging task for both future research and future policy initiatives is developing effective policies for stimulating the adoption of energy-efficient technologies in energy-extensive small and medium sized enterprises.