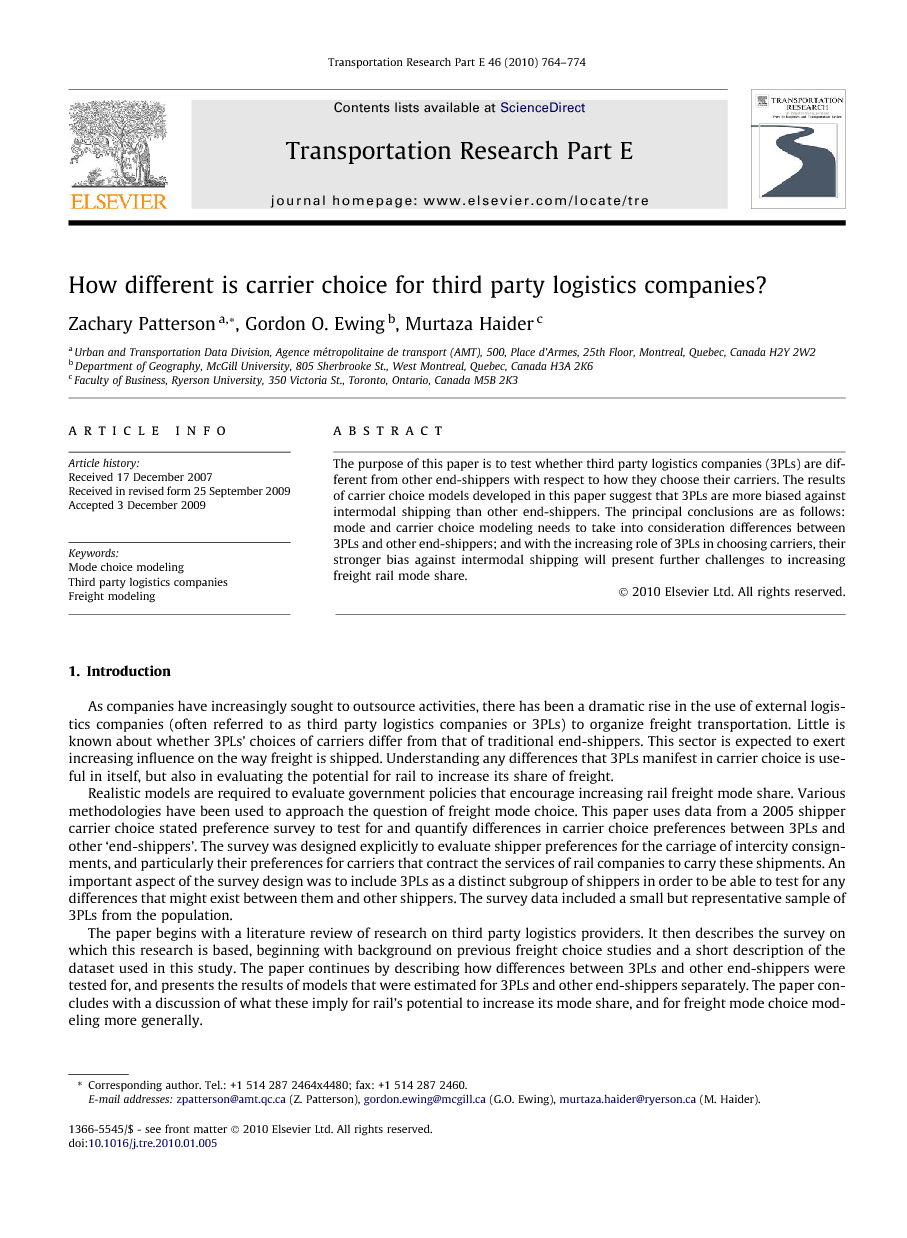 The purpose of this paper is to test whether third party logistics companies (3PLs) are different from other end-shippers with respect to how they choose their carriers. The results of carrier choice models developed in this paper suggest that 3PLs are more biased against intermodal shipping than other end-shippers. The principal conclusions are as follows: mode and carrier choice modeling needs to take into consideration differences between 3PLs and other end-shippers; and with the increasing role of 3PLs in choosing carriers, their stronger bias against intermodal shipping will present further challenges to increasing freight rail mode share.

As companies have increasingly sought to outsource activities, there has been a dramatic rise in the use of external logistics companies (often referred to as third party logistics companies or 3PLs) to organize freight transportation. Little is known about whether 3PLs’ choices of carriers differ from that of traditional end-shippers. This sector is expected to exert increasing influence on the way freight is shipped. Understanding any differences that 3PLs manifest in carrier choice is useful in itself, but also in evaluating the potential for rail to increase its share of freight. Realistic models are required to evaluate government policies that encourage increasing rail freight mode share. Various methodologies have been used to approach the question of freight mode choice. This paper uses data from a 2005 shipper carrier choice stated preference survey to test for and quantify differences in carrier choice preferences between 3PLs and other ‘end-shippers’. The survey was designed explicitly to evaluate shipper preferences for the carriage of intercity consignments, and particularly their preferences for carriers that contract the services of rail companies to carry these shipments. An important aspect of the survey design was to include 3PLs as a distinct subgroup of shippers in order to be able to test for any differences that might exist between them and other shippers. The survey data included a small but representative sample of 3PLs from the population. The paper begins with a literature review of research on third party logistics providers. It then describes the survey on which this research is based, beginning with background on previous freight choice studies and a short description of the dataset used in this study. The paper continues by describing how differences between 3PLs and other end-shippers were tested for, and presents the results of models that were estimated for 3PLs and other end-shippers separately. The paper concludes with a discussion of what these imply for rail’s potential to increase its mode share, and for freight mode choice modeling more generally.

The contributions of this paper to the literature are the following. First, it represents the first attempt to establish and quantify differences in preferences for carrier and mode choice between shippers that choose their own carriers, and those that choose carriers on behalf of shippers. Second, it shows clearly that 3PLs have a particularly strong bias against intermodal transportation. Third, it provides evidence that 3PLs may behave differently from other end-shippers in other respects as well. In particular, it suggests 3PLs to be more sensitive to cost for ‘regular’ (non high-risk) goods. It also suggests them to be more sensitive to carrier attributes for the high-risk shipments that they organize with their shipment type/carrier attribute coefficients being larger for cost, on-time reliability and damage risk. It is not justifiable (statistically speaking) to be too categorical about this last observation since an analysis of the confidence intervals of the coefficients in the two models does not bear out the conclusions. The fact remains, however, that with more 3PL observations and thereby narrower confidence intervals, these differences may well be born out. As a result, this represents an important avenue of further research given the paucity of research looking directly at 3PLs. The results also beg the question “why do 3PLs behave differently from other end-shippers?” Taken together, the results yield an interesting interpretation, despite the lack of literature or theory to rely on for this topic. Perhaps increased sensitivity to shipment attributes for high-risk goods is due to the fact that 3PLs are serving clients. Since risks are more substantial for high-risk goods, shippers in general are more concerned about them arriving on-time and in good condition. For other end-shippers a botched shipment can be dealt with by changing carriers. For a shipper using a 3PL, a botched shipment can be dealt with by changing their 3PL. From the 3PL’s perspective the fact that a botched shipment can result in the loss of a client appears to make them more sensitive to carrier attributes, particularly in the case of high-risk goods. For the most part, 3PLs appear to behave with their clients’ best interests at heart. As such, they are more sensitive to cost and on-time reliability. They are also particularly sensitive to damage risk if they are shipping fragile goods, more sensitive to on-time reliability if a shipment is by-appointment, etc. That 3PLs appear to be acting in their clients’ interest could also explain why they have become so popular. Because of the rapid increase in the importance of 3PLs in freight transportation, this research has two important implications. First, that 3PLs appear to be very reluctant to use intermodal carriers presents an even greater challenge to increasing rail mode share. Second, this has important implications for carrier and mode choice modeling more broadly. In particular, it suggests that failure to capture differences between 3PLs and other end-shippers will result in the use of inadequate models for describing and predicting carrier and mode choice – certainly in the case of carrier mode, and perhaps in other respects as well. As a result, future models ought to seek to capture differences between 3PLs and other end-shippers, and future research to better understand the differences between 3PLs and other end-shippers.