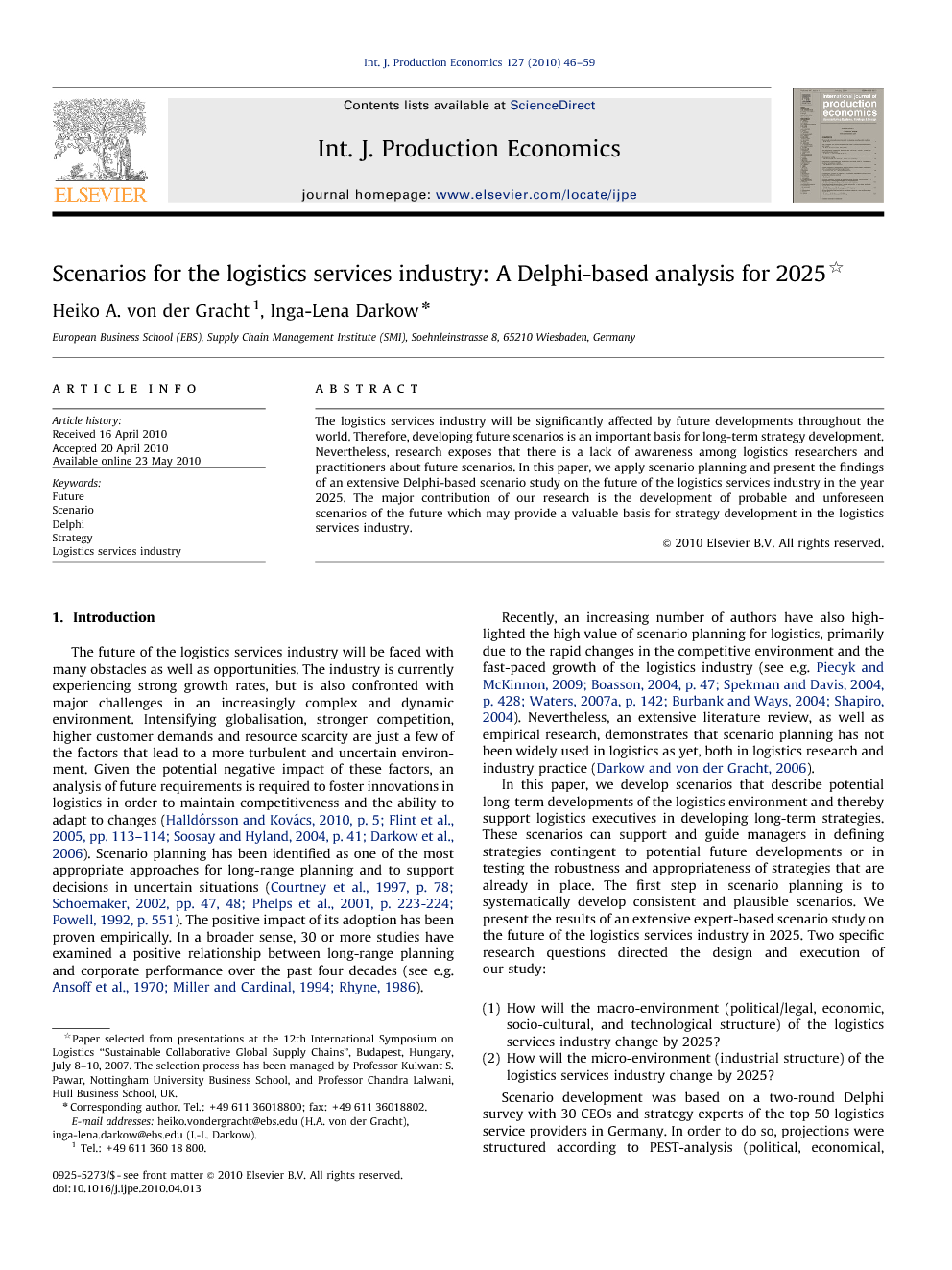 The future of the logistics services industry will be faced with many obstacles as well as opportunities. The industry is currently experiencing strong growth rates, but is also confronted with major challenges in an increasingly complex and dynamic environment. Intensifying globalisation, stronger competition, higher customer demands and resource scarcity are just a few of the factors that lead to a more turbulent and uncertain environment. Given the potential negative impact of these factors, an analysis of future requirements is required to foster innovations in logistics in order to maintain competitiveness and the ability to adapt to changes (Halldórsson and Kovács, 2010, Flint et al., 2005, Soosay and Hyland, 2004 and Darkow et al., 2006). Scenario planning has been identified as one of the most appropriate approaches for long-range planning and to support decisions in uncertain situations (Courtney et al., 1997, Schoemaker, 2002, Phelps et al., 2001 and Powell, 1992). The positive impact of its adoption has been proven empirically. In a broader sense, 30 or more studies have examined a positive relationship between long-range planning and corporate performance over the past four decades (see e.g. Ansoff et al., 1970, Miller and Cardinal, 1994 and Rhyne, 1986). Recently, an increasing number of authors have also highlighted the high value of scenario planning for logistics, primarily due to the rapid changes in the competitive environment and the fast-paced growth of the logistics industry (see e.g. Piecyk and McKinnon, 2009, Boasson, 2004, Spekman and Davis, 2004, Waters, 2007, Burbank and Ways, 2004 and Shapiro, 2004). Nevertheless, an extensive literature review, as well as empirical research, demonstrates that scenario planning has not been widely used in logistics as yet, both in logistics research and industry practice (Darkow and von der Gracht, 2006). In this paper, we develop scenarios that describe potential long-term developments of the logistics environment and thereby support logistics executives in developing long-term strategies. These scenarios can support and guide managers in defining strategies contingent to potential future developments or in testing the robustness and appropriateness of strategies that are already in place. The first step in scenario planning is to systematically develop consistent and plausible scenarios. We present the results of an extensive expert-based scenario study on the future of the logistics services industry in 2025. Two specific research questions directed the design and execution of our study: (1) How will the macro-environment (political/legal, economic, socio-cultural, and technological structure) of the logistics services industry change by 2025? (2) How will the micro-environment (industrial structure) of the logistics services industry change by 2025? Scenario development was based on a two-round Delphi survey with 30 CEOs and strategy experts of the top 50 logistics service providers in Germany. In order to do so, projections were structured according to PEST-analysis (political, economical, socio-cultural, and technological conditions related to research question 1) (see Wilson and Gilligan, 2005, p. 123) and Michael E. Porter’s “Five Forces Model” (Porter, 1979) (related to research question 2). These projections include aspects such as the global energy consumption, resource scarcity, labour shortage, the role of emerging and developing countries, urbanisation, demographic change, social responsibility, global warming, digitisation, global networks, and large-scale outsourcing. The experts which participated in the Delphi study assessed each of these projections in terms of the probability of occurrence, the potential impact on the industry and their desirability. Based on these assessments and numerous verbal specifications and comments from the participants, different scenarios were developed. Probable scenarios for the future of the logistics services industry in 2025 were developed based on 12 projections with high probabilities of occurrence and consensus among experts; these included, for example, projections about the diminishing economic gap between emerging markets and developing countries and the still unresolved energy supply problem to foster globalisation. Furthermore, we examined surprising or unexpected scenarios, so-called discontinuities, with a low probability of occurrence but with a high impact on the industry; these include, “fabbing”, terrorist attacks, and the spread of pandemics. The remainder of our paper is organised as follows: we begin with a review of the literature relevant to our research, followed by a description of the research methodology. Subsequently, we present our findings with respect to probable scenarios and unforeseen events. Finally, we conclude by delineating various implications and further research avenues.

In our research, we aimed at closing a research gap with respect to scenario development in the logistics services industry. More specifically, two research questions guided our research: (1) How will the macro-environment (political/legal, economic, socio-cultural, and technological structure) of the logistics services industry change by 2025? and (2) How will the micro-environment (industrial structure) of the logistics services industry change by 2025? By using empirical research, we examined possible events and developments, identified major factors, and aggregated expert knowledge for the long-term future. Our research makes four important contributions to the existing body of literature. First, we conducted a Delphi survey within the German logistics services industry in order to determine the probability, impact, and desirability of 41 projections on the future of this industry. In general, the Delphi survey led to a convergence among the expert panel’s opinion, implying that the participants strongly agreed in their estimations. For 25 out of 41 projections, consensus was reached; for 9 projections consensus was already achieved in the first Delphi round. Most projections yielded an average impact on the logistics services industry of 3 or higher (5-point Likert scale) as well as an average expectational probability of 50% or more; consensus projections even 60–80%. Second, we conducted a scenario development process to picture the most probable future of the logistics services industry 2025. Five dominant themes can be identified that are likely to influence the macro-environment and industry structure in the future: the general notion towards strong social responsibility and ecological awareness; the intensifying pace of globalisation and its imperative for global networks; the shortage of young, qualified, and mobile personnel; the changing customer demands towards more convenience, simplicity, promptness, and flexibility; and the digitisation of business. The highly probable picture of the future is thus one of a more cost-intensive, complex, dynamic, competitive, digitised, global, networked, customised and faster logistics services business. Third, we included analyses of discontinuities and surprising occurrences in our scenarios research to give further insights on possible changes in the macro-environment and industry structure for the logistics services industry. In fact, scenario planning might be of more relevance for logistics service providers in the future due to the turbulent business environment, which is highly susceptible to discontinuities. Our discontinuity analysis came up with new, inspiring, and surprising issues although it was limited in its scope. The wildcard scenarios on fabbing, terrorism attacks, and pandemics illustrated that such analyses help to sensitise companies for events and developments which are very improbable, but might have fundamental impact on the business if they do happen. Fourth, we focused on the application of the Delphi method as a basis for scenario planning. Although recommended by several authors, rigour is seldom discussed in detail. This study has drawn attention to issues of validity and reliability and proposes rigorous methodology to develop scenarios based on a Delphi survey. The research was conducted in the form of a two-round expert-based scenario study among the top 50 logistics service providers, of which 24 participated. Managerial contributions of our research primarily concern the generation of planning data and the exemplification of systematic and methodologically sound scenario development. The scenario data offers a starting point to customise specific long-term strategies for the company. For organisations already investing in environmental scanning, the Delphi data can provide a validation or expansion of their own scans. A scenario transfer, i.e. the usage of the scenarios for decision support, may be either active or passive. While the former concerns the update or development of new strategies, the latter refers to testing existing strategies regarding their robustness. The wildcards are particularly suitable for developing contingency plans for the future. Logistics planners may use our data as a basis for an extended wildcard analysis and the establishment or support of an early warning system. There are limitations to this research which also reveal possible avenues for further research. The research, and especially scenario development, is mainly based on qualitative research, even though we provide statistical data to support our qualitative findings. Further quantitative data (e.g. with respect to cost implications and industry growth rates) may be included in the analyses to provide a more tangible basis for strategic planning. Furthermore, the Delphi study exclusively focused on the top 50 logistics service providers in Germany. Future research might also examine the implications for small- and medium-sized companies and can also be extended to include other regions of interest. The Delphi panel was additionally limited to 30 experts, since it was the recommended size for a homogeneous group of experts and a questionnaire with qualitative information. However, future research might place more emphasis on a larger sample rather than on qualitative data, to identify scenarios that represent the perspective of the entire logistics industry, i.e. also manufacturing and retail. The Delphi survey was limited to two rounds. As a consequence, several projections did not reach consensus. Nevertheless, there was convergence among all of them. Future research might continue with their evaluation and eventually find further consensus projections. The Delphi survey aimed at collecting data for scenario development. It, therefore, excluded continuative analyses, such as of subgroups. Future research might engage in the comparison of views of different stakeholders. It would, for example, be of interest to see where the expectations of logistics service providers and their customers differ and why.