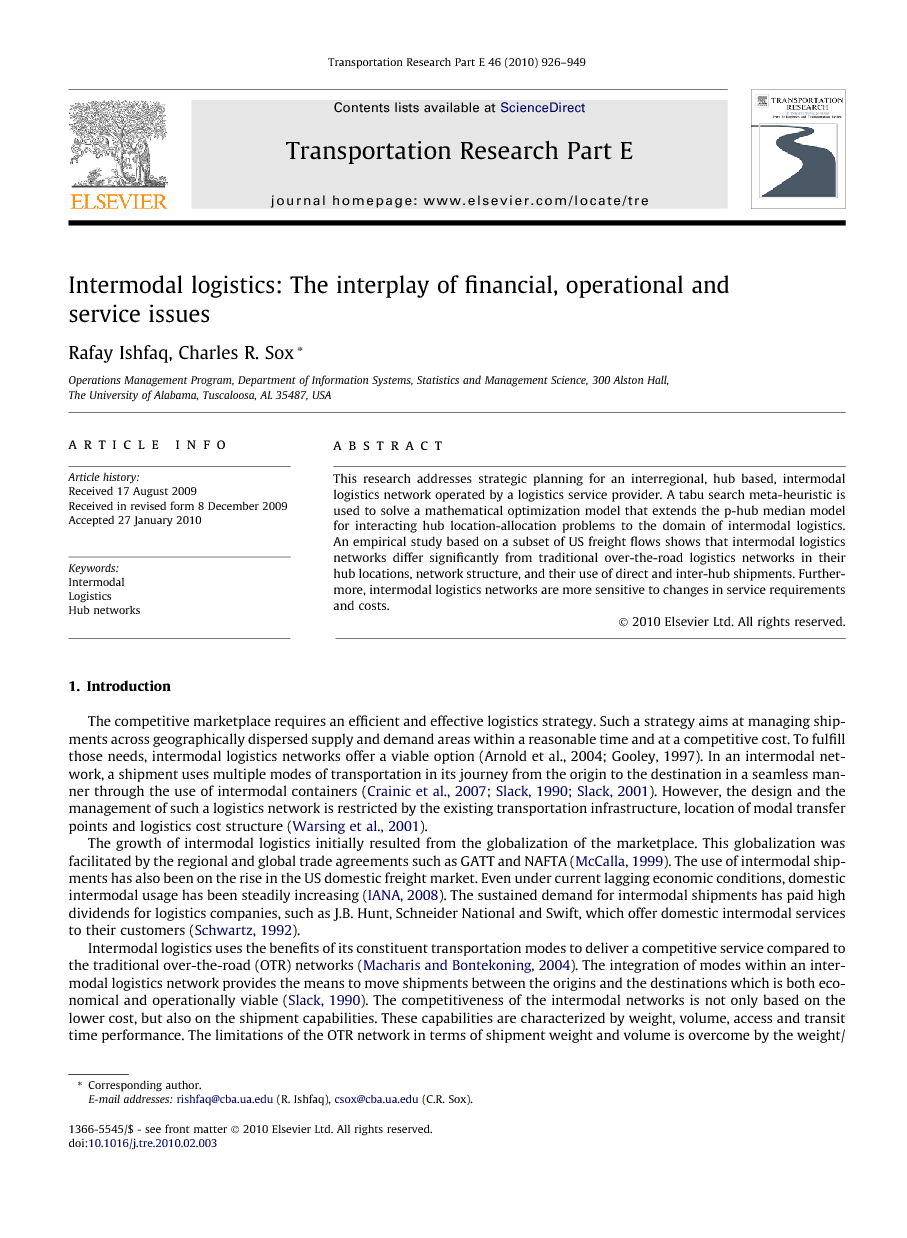 This research has explored the interplay between the financial, operational and service aspects of an intermodal logistics hub network. The contributions of this paper to the literature are in the development of a modeling framework for an intermodal logistics hub network, a meta-heuristic solution approach, and managerial insights into the design and management of an interregional, intermodal logistics hub network. The modeling framework incorporates different types of shipments (direct, inter-hub and single hub), different modes of transportation (road, rail and air), fixed hub operating costs, modal connectivity costs, economies-of-scale and service time requirements. This research developed a meta-heuristic (tabu search) solution approach for the intermodal hub network design problem. A computational study used the measure of percent optimality gap to demonstrate the performance of the meta-heuristic by comparing its solutions with the corresponding optimal solutions. The average percent optimality gap over all the test problems was 1.30%. An empirical study was used to gain relevant managerial insights into the intermodal logistics networks. This study highlighted the differences in the structure of over-the-road (OTR) and intermodal (IM) logistics networks. The study found that the location of hubs in the OTR and IM networks differed greatly. The choice of the best hub locations in the IM networks was found to be affected by the network parameters, whereas the hub locations in OTR networks were very robust. The results identified cities which have a strategic geographical location and adequate modal network connectivity that make them very suitable candidates for hub locations. The results also showed that while the use of intermodal shipments reduced the transportation costs, the modal connectivity costs and service time requirements limited the benefits of those intermodal shipments. It was shown that the location of hubs and the design of service regions in the IM networks allowed for more hub based shipments than the OTR networks. The study also found that changes in service time requirements required reorganizing the intermodal hub network by moving hubs and using different types of shipments and transportation modes. Under short service time requirements, the modal usage transitioned from intermodal rail to road to single hub shipments to direct shipments and air shipments. The study also found large variations in the inbound and outbound flows at the hubs with changing service requirements. The efficiency gains in OTR networks can reduce the cost benefit of intermodal shipments, however it would require a prohibitive level of effort to achieve the necessary efficiency gain. Additional research can provide further understanding about the design of intermodal hub networks. Future research that considers different service offerings, existing hub locations, the effect of limited hub capacity, and the impact of congestion on the use of different modes would provide more insights into this problem. Another interesting extension would be to model the use of multi-modal freight flows along each lane instead of the all-or-nothing approach used in this research. This extension would accomodate the consideration of multiple commodities that require different transportation modes. It would support the offering of differentiated service along a lane. It would also provide the necessary flexibility to consider limited flow capacity for each transportation mode. Additional empirical studies on the global movement of freight would also extend the scope of this research into the global logistics arena.