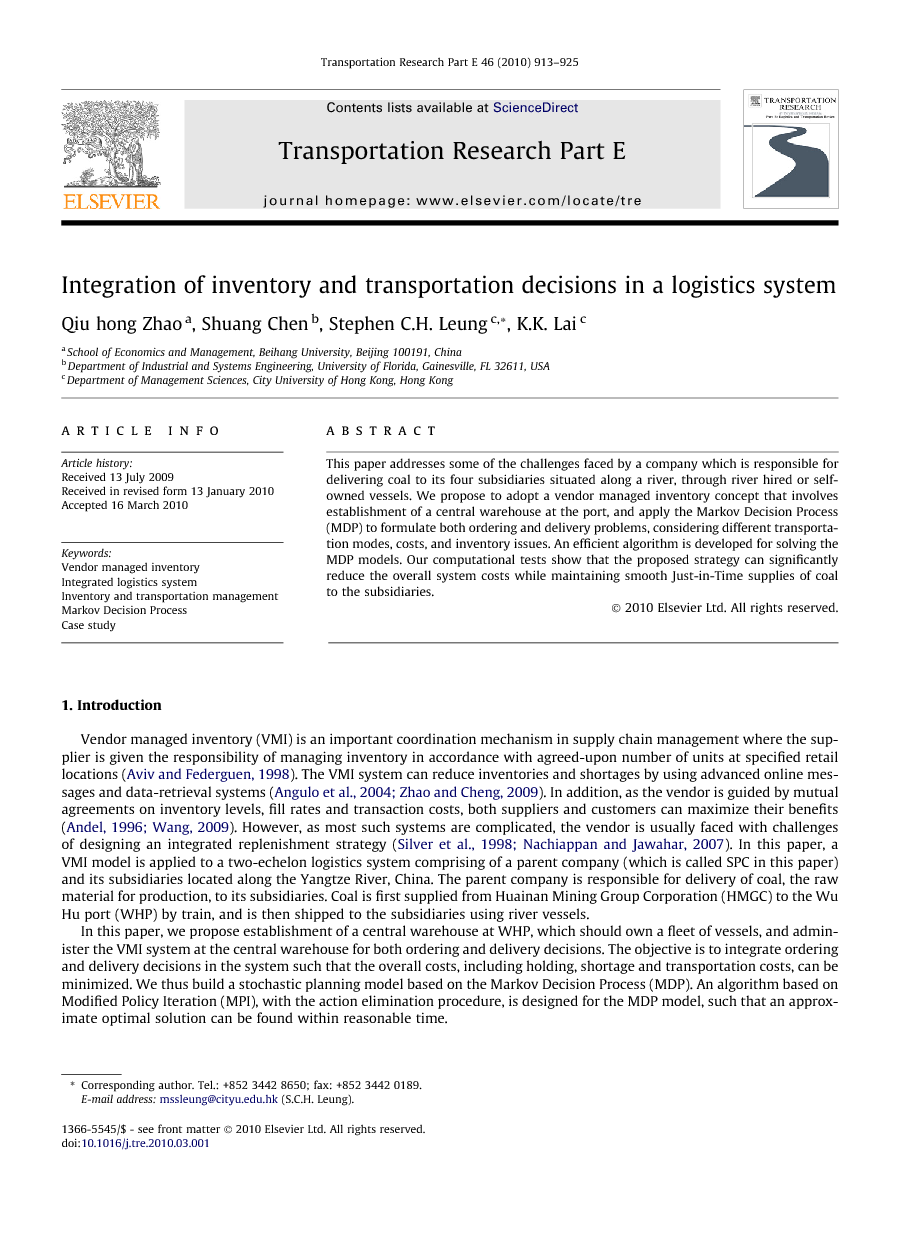 This paper addresses some of the challenges faced by a company which is responsible for delivering coal to its four subsidiaries situated along a river, through river hired or self-owned vessels. We propose to adopt a vendor managed inventory concept that involves establishment of a central warehouse at the port, and apply the Markov Decision Process (MDP) to formulate both ordering and delivery problems, considering different transportation modes, costs, and inventory issues. An efficient algorithm is developed for solving the MDP models. Our computational tests show that the proposed strategy can significantly reduce the overall system costs while maintaining smooth Just-in-Time supplies of coal to the subsidiaries.

Vendor managed inventory (VMI) is an important coordination mechanism in supply chain management where the supplier is given the responsibility of managing inventory in accordance with agreed-upon number of units at specified retail locations (Aviv and Federguen, 1998). The VMI system can reduce inventories and shortages by using advanced online messages and data-retrieval systems (Angulo et al., 2004 and Zhao and Cheng, 2009). In addition, as the vendor is guided by mutual agreements on inventory levels, fill rates and transaction costs, both suppliers and customers can maximize their benefits (Andel, 1996 and Wang, 2009). However, as most such systems are complicated, the vendor is usually faced with challenges of designing an integrated replenishment strategy (Silver et al., 1998 and Nachiappan and Jawahar, 2007). In this paper, a VMI model is applied to a two-echelon logistics system comprising of a parent company (which is called SPC in this paper) and its subsidiaries located along the Yangtze River, China. The parent company is responsible for delivery of coal, the raw material for production, to its subsidiaries. Coal is first supplied from Huainan Mining Group Corporation (HMGC) to the Wu Hu port (WHP) by train, and is then shipped to the subsidiaries using river vessels. In this paper, we propose establishment of a central warehouse at WHP, which should own a fleet of vessels, and administer the VMI system at the central warehouse for both ordering and delivery decisions. The objective is to integrate ordering and delivery decisions in the system such that the overall costs, including holding, shortage and transportation costs, can be minimized. We thus build a stochastic planning model based on the Markov Decision Process (MDP). An algorithm based on Modified Policy Iteration (MPI), with the action elimination procedure, is designed for the MDP model, such that an approximate optimal solution can be found within reasonable time. It is suggested by theoretical and computational analysis that the VMI mode of operations provides significant competitive advantages. In contrast to the existing VMI literature, where the suppliers and their downstream enterprises belong to different business entities, in this paper, the warehouse (acting as a supplier) and the subsidiaries (acting as customers) are all controlled by SPC, such that they have more incentives for information sharing. Moreover, the proposed model can still be considered as VMI for the following two reasons: (1) the warehouse and the subsidiaries are independent of each other in financial terms; and (2) the warehouse is responsible for inventory decisions of the subsidiaries in a VMI-like fashion. In terms of supply and demand, the model and approach provided in this paper match the situations where a supply lead time may exist, and demands of customers are stochastic, but can be approximated to some discrete distributions. In addition, different from most literature about VMI, our study focuses on complicated logistics systems where different transportation modes are involved along the supply chain, and their capacities, fixed and variable costs, and other issues like penalty costs, lead time, are fully considered. The proposed method for the integration of inventory and transportation decisions is more comprehensive and realistic. We introduce some advanced supply chain notions such as VMI and Just-in-Time to a traditional industry in China, and also successfully apply a stochastic process MDP model for solving practical problems. Therefore, this work can provide insights to companies facing similarly complicated operations in reality. The rest of this paper is organized as follows. In Section 2, the background of the problem is given. Some general strategies, including VMI, are proposed for overcoming problems in the existing logistics system. A review of relevant literature is provided in Section 3. Section 4 addresses notations and provides a detailed analysis for developing the MDP model, involving both delivery and ordering decisions at the warehouse. In Section 5, a MPI-based algorithm for solving the MDP models is presented. Comparative analysis of the proposed system with the current system is conducted in Section 6. Finally, conclusion is given in Section 7.

This paper addresses a practical logistics problem confronted by SPC, a petroleum and chemical corporation in China, and its subsidiaries along the Yangtze River. We recommend the VMI concept to the parent company, involving establishment of a central warehouse, which can restrain the upstream wave in the supply chain at WHP and also serve as a buffer for stabilizing coal supplies. The central warehouse is responsible for delivery decisions for the subsidiaries, as well as its own ordering decisions. By operating a fleet of private vessels, the JIT mode can be adopted in the delivery process. To find the optimal delivery and ordering decisions, the MDP models are developed, in which ordering and delivery decisions are integrated concurrently to minimize the long-run expected cost under discount criterion, including transportation cost, expected inventory cost and expected shortage cost. We apply the Modified Policy Iteration algorithm with an action elimination procedure to solve the MDP models and approximately obtain the optimal solutions. With a set of data, the long-run expected cost of the whole system under the proposed strategy is compared with the current cost. It turns out that the proposed VMI strategy fits well, reducing the cost of the system significantly. Even though the computational results are obtained under certain assumptions, such as demand characteristics and cost structures, it can be deduced from qualitative and quantitative analysis, as shown in this paper, that VMI concepts and scientific management decisions offer apparent advantages. Contributions of the paper to the literature are as follows. We provide a general integration framework and solution approach for a set of complicated logistics systems. In such kind of systems, a supply lead time may exist, while customer demands are stochastic, and can be approximated to some discrete distributions. We introduce some advanced supply chain notions as VMI and Just-in-Time to a traditional industry, and also successfully apply a stochastic process MDP model for solving practical real life problems. Different from most extant literature, our models handle the real world case where capacities of different transportation modes, and their fixed and variable costs are different, and other issues like penalty costs and lead times are involved. The proposed method for integration of inventory and transportation decisions is comprehensive and realistic. Therefore, it is concluded that this work provides a good guide not only for SPC, but also for other companies facing similar scenarios.