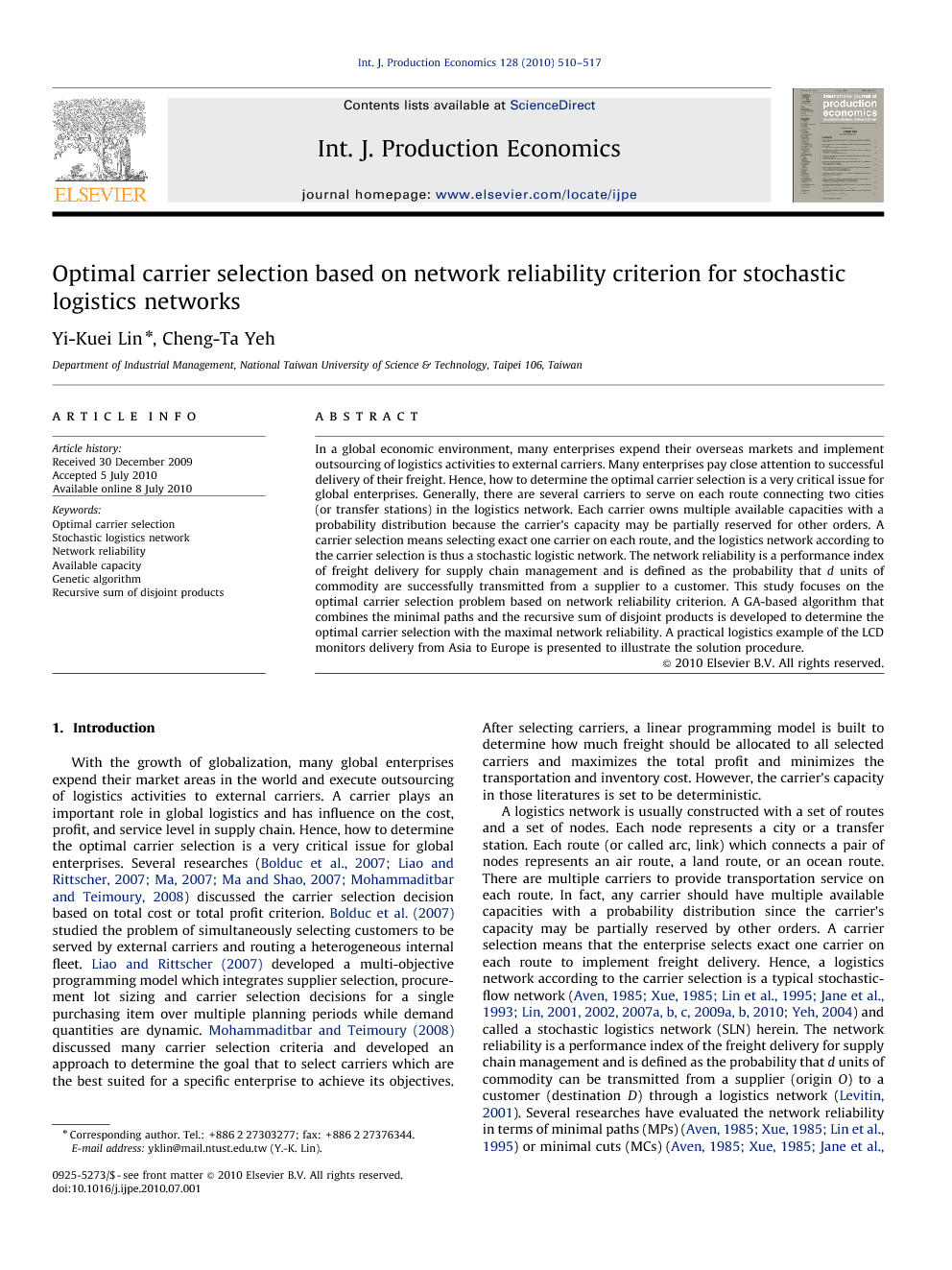 In a global economic environment, many enterprises expend their overseas markets and implement outsourcing of logistics activities to external carriers. Many enterprises pay close attention to successful delivery of their freight. Hence, how to determine the optimal carrier selection is a very critical issue for global enterprises. Generally, there are several carriers to serve on each route connecting two cities (or transfer stations) in the logistics network. Each carrier owns multiple available capacities with a probability distribution because the carrier’s capacity may be partially reserved for other orders. A carrier selection means selecting exact one carrier on each route, and the logistics network according to the carrier selection is thus a stochastic logistic network. The network reliability is a performance index of freight delivery for supply chain management and is defined as the probability that d units of commodity are successfully transmitted from a supplier to a customer. This study focuses on the optimal carrier selection problem based on network reliability criterion. A GA-based algorithm that combines the minimal paths and the recursive sum of disjoint products is developed to determine the optimal carrier selection with the maximal network reliability. A practical logistics example of the LCD monitors delivery from Asia to Europe is presented to illustrate the solution procedure.

With the growth of globalization, many global enterprises expend their market areas in the world and execute outsourcing of logistics activities to external carriers. A carrier plays an important role in global logistics and has influence on the cost, profit, and service level in supply chain. Hence, how to determine the optimal carrier selection is a very critical issue for global enterprises. Several researches (Bolduc et al., 2007, Liao and Rittscher, 2007, Ma, 2007, Ma and Shao, 2007 and Mohammaditbar and Teimoury, 2008) discussed the carrier selection decision based on total cost or total profit criterion. Bolduc et al. (2007) studied the problem of simultaneously selecting customers to be served by external carriers and routing a heterogeneous internal fleet. Liao and Rittscher (2007) developed a multi-objective programming model which integrates supplier selection, procurement lot sizing and carrier selection decisions for a single purchasing item over multiple planning periods while demand quantities are dynamic. Mohammaditbar and Teimoury (2008) discussed many carrier selection criteria and developed an approach to determine the goal that to select carriers which are the best suited for a specific enterprise to achieve its objectives. After selecting carriers, a linear programming model is built to determine how much freight should be allocated to all selected carriers and maximizes the total profit and minimizes the transportation and inventory cost. However, the carrier’s capacity in those literatures is set to be deterministic. A logistics network is usually constructed with a set of routes and a set of nodes. Each node represents a city or a transfer station. Each route (or called arc, link) which connects a pair of nodes represents an air route, a land route, or an ocean route. There are multiple carriers to provide transportation service on each route. In fact, any carrier should have multiple available capacities with a probability distribution since the carrier’s capacity may be partially reserved by other orders. A carrier selection means that the enterprise selects exact one carrier on each route to implement freight delivery. Hence, a logistics network according to the carrier selection is a typical stochastic-flow network (Aven, 1985, Xue, 1985, Lin et al., 1995, Jane et al., 1993, Lin, 2001, Lin, 2002, Lin, 2007a, Lin, 2007b, Lin, 2007c, Lin, 2009a, Lin, 2009b, Lin, 2010 and Yeh, 2004) and called a stochastic logistics network (SLN) herein. The network reliability is a performance index of the freight delivery for supply chain management and is defined as the probability that d units of commodity can be transmitted from a supplier (origin O) to a customer (destination D) through a logistics network (Levitin, 2001). Several researches have evaluated the network reliability in terms of minimal paths (MPs) ( Aven, 1985, Xue, 1985 and Lin et al., 1995) or minimal cuts (MCs) ( Aven, 1985, Xue, 1985 and Jane et al., 1993) without considering unreliable nodes and Lin has evaluated the network reliability with unreliable nodes in terms of MPs (Lin, 2001) and MCs (Lin, 2002), respectively. Furthermore, Lin (2010) measured a MC based approach to evaluate the network reliability for a multi-commodity logistics network, and then Lin (2010) developed a MP approach to measure the network reliability for two-commodity supply chain network. From the viewpoint of optimization, Lisnianski and Levitin (2003) classified the network reliability optimization problems into two categories: minimizing the resources required for providing a specific network reliability level and achieving the maximal network reliability subject to various constraints. Many researchers have discussed the issues involving the network structure (Painton and Campbell, 1995 and Coit and Smith, 1996a; Levitin and Lisnianski, 2001), the flow assignment (Liu et al., 2007) and the commodity allocation (Hsieh and Lin, 2003, Hsieh and Chen, 2005a and Hsieh and Chen, 2005ba, b). Xu et al. (2009) developed a flow assignment strategy with the minimal time elapse and the maximal network reliability, where the carriers on all routes are fixed. This paper discusses the optimal carrier selection problem based on network reliability criterion, namely OCSNR problem. In global logistics, the freight travels through land routes and air/ocean routes. We focus on a practical logistics network including air routes and land routes to find the optimal carrier selection with the highest network reliability. Particularly, the capacity of each carrier on air (resp. land) route is counted in terms of weight (resp. number of containers). In order to solve the OCSNR problem, this study proposes a GA-based algorithm, namely GA-OCSNR for short. In the proposed algorithm, a chromosome denotes a carrier selection. The fitness function combining the MPs and the recursive sum of disjoint products (RSDP, Zuo et al., 2007) evaluates the network reliability for each chromosome. A practical logistics example of the LCD monitors delivery from Asia to Europe is discussed to illustrate the solution procedure. The remainder of this paper is organized as follows. Section 2 addresses the basic assumptions and the problem formulation. Section 3 introduces the stochastic logistics network model. The GA-based algorithm is proposed in Section 4. A simple network and a practical logistics example are performed to execute the GA-OCSNR algorithm in Section 5. Conclusions are finally drawn in Section 6, along with recommendations for future research.

This study discusses the optimal carrier selection problem based on network reliability criterion. We demonstrate a practical logistics network to ship 22″ LCD monitors through air and land routes from China to Germany. Since the carrier’s capacity on the air (resp. land) route is counted in terms of weight (resp. number of containers), the capacity of MP should be counted by considering through air or land routes. Although the global logistics networks in the real world are not very complex, the number of possible carrier solutions follows an exponential growth. There are View the MathML source∏in+qzi=310=59,049 and View the MathML source∏in+qzi=5×5×4×…×6=209,018,880,000 possible carrier selections in the simple network and the practical logistics network, respectively. Hence, the concept of developing GA-based algorithm arises to solve the OCSNR problem. The proposed algorithm has better computational efficiency than the implicit enumeration approach, and has better network reliability than the random search approach. Additionally, this paper mainly explores the delivery for single type of commodity. However, the delivery for multiple types of commodity is also a common situation in global logistics. The case for multiple types of commodity is obviously different from single-type case since different commodities consume the carrier’s capacities differently. Future research can extend the OCSNR problem to the delivery for multiple types of commodity.