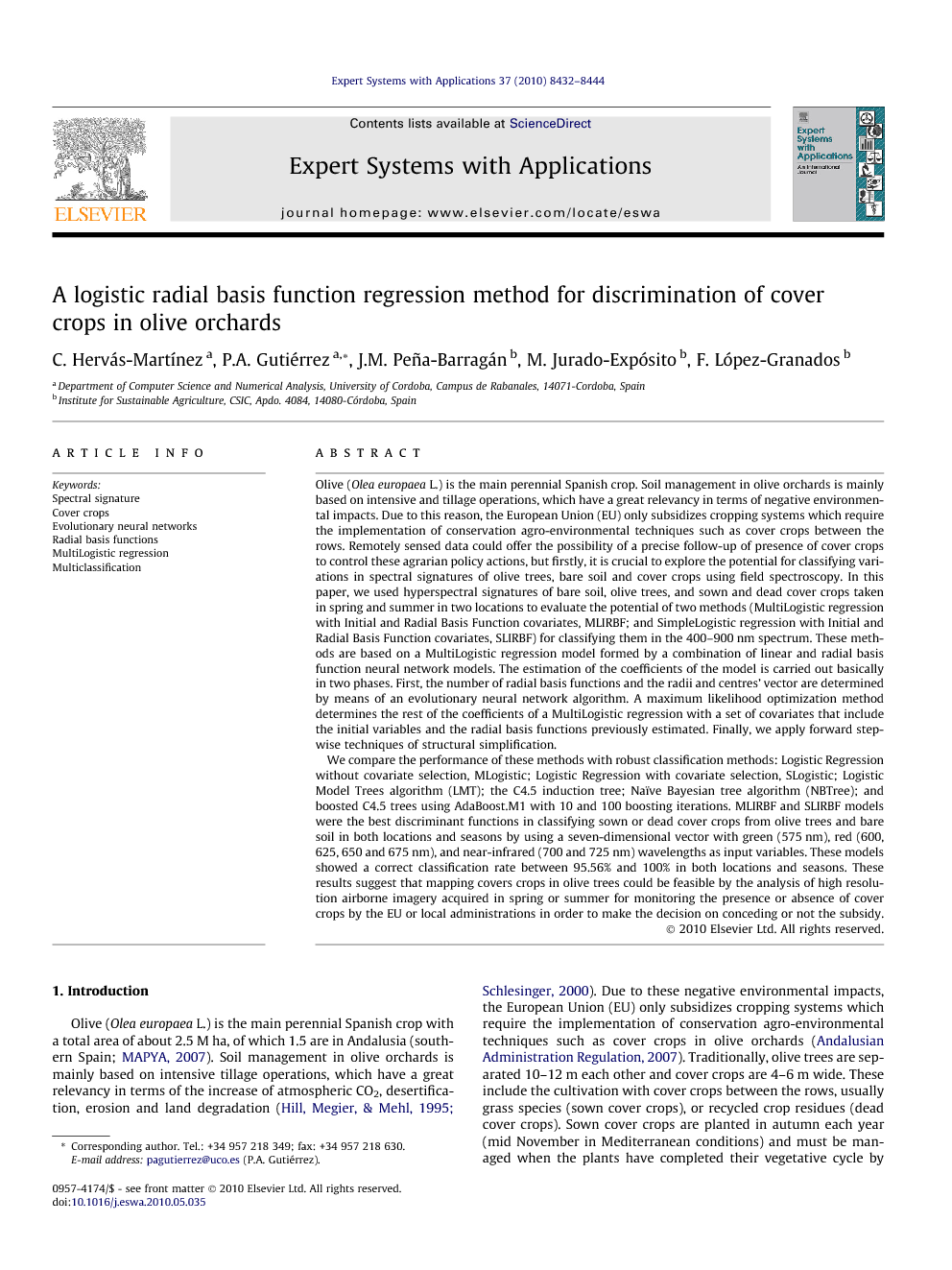 Olive (Olea europaea L.) is the main perennial Spanish crop. Soil management in olive orchards is mainly based on intensive and tillage operations, which have a great relevancy in terms of negative environmental impacts. Due to this reason, the European Union (EU) only subsidizes cropping systems which require the implementation of conservation agro-environmental techniques such as cover crops between the rows. Remotely sensed data could offer the possibility of a precise follow-up of presence of cover crops to control these agrarian policy actions, but firstly, it is crucial to explore the potential for classifying variations in spectral signatures of olive trees, bare soil and cover crops using field spectroscopy. In this paper, we used hyperspectral signatures of bare soil, olive trees, and sown and dead cover crops taken in spring and summer in two locations to evaluate the potential of two methods (MultiLogistic regression with Initial and Radial Basis Function covariates, MLIRBF; and SimpleLogistic regression with Initial and Radial Basis Function covariates, SLIRBF) for classifying them in the 400–900 nm spectrum. These methods are based on a MultiLogistic regression model formed by a combination of linear and radial basis function neural network models. The estimation of the coefficients of the model is carried out basically in two phases. First, the number of radial basis functions and the radii and centres’ vector are determined by means of an evolutionary neural network algorithm. A maximum likelihood optimization method determines the rest of the coefficients of a MultiLogistic regression with a set of covariates that include the initial variables and the radial basis functions previously estimated. Finally, we apply forward stepwise techniques of structural simplification. We compare the performance of these methods with robust classification methods: Logistic Regression without covariate selection, MLogistic; Logistic Regression with covariate selection, SLogistic; Logistic Model Trees algorithm (LMT); the C4.5 induction tree; Naïve Bayesian tree algorithm (NBTree); and boosted C4.5 trees using AdaBoost.M1 with 10 and 100 boosting iterations. MLIRBF and SLIRBF models were the best discriminant functions in classifying sown or dead cover crops from olive trees and bare soil in both locations and seasons by using a seven-dimensional vector with green (575 nm), red (600, 625, 650 and 675 nm), and near-infrared (700 and 725 nm) wavelengths as input variables. These models showed a correct classification rate between 95.56% and 100% in both locations and seasons. These results suggest that mapping covers crops in olive trees could be feasible by the analysis of high resolution airborne imagery acquired in spring or summer for monitoring the presence or absence of cover crops by the EU or local administrations in order to make the decision on conceding or not the subsidy.

This study demonstrated the capability of LR and RBFNN combination models, where the final coefficients were estimated using MultiLogistic regression. These models (MLIRBF and SLIRBF) were applied for the discrimination of cover crops in olive orchards as affected by their phenological stage using the spectral signatures obtained with a high-resolution field spectroradiometer. The objective was to differentiate bare soil, olive trees and cover crops (live or dead). SLIRBF and MLIRBF models provided better accuracy models in the generalization sets than linear LR. Mean generalization accuracies of 96.13% and 92.80% were obtained using the SLIRBF methodology for the two seasonal stages of “Cortijo del Rey”. Moreover, the best model in this location in spring resulted in an accuracy of 98.61% in the training set and 100% in generalization and 95.56% in the training set and 100% in generalization set in summer. Furthermore, a 97.00% and 99.50% of generalization mean accuracies was obtained using MLIRBF methodology for the two seasonal stages of “Matallana” and a 100% in training and generalization sets for the best models obtained in the two phenological stages. Last, seven advanced methodologies (MLogistic, SLogistic, LMT, C4.5, NBTree, AdaBoost 10 and 100) were compared to the methodologies herein presented, resulting in lower accuracy except for “Matallana” spring where MLogistic obtained a slightly higher result. From the statistical test results we can conclude that the best methodology is MLIRBF because it presents statistically significant differences for α = 0.05 or α = 0.1, for four out of the 11 compared methodologies. To summarize, our models successfully discriminated bare soil, olive trees and all of the possible kind of cover crops used by farmers in our conditions in spring and summer. However, more research is needed to study if high spatial and spectral resolution airborne imagery would correctly classify and map any of the land uses proposed in this paper.