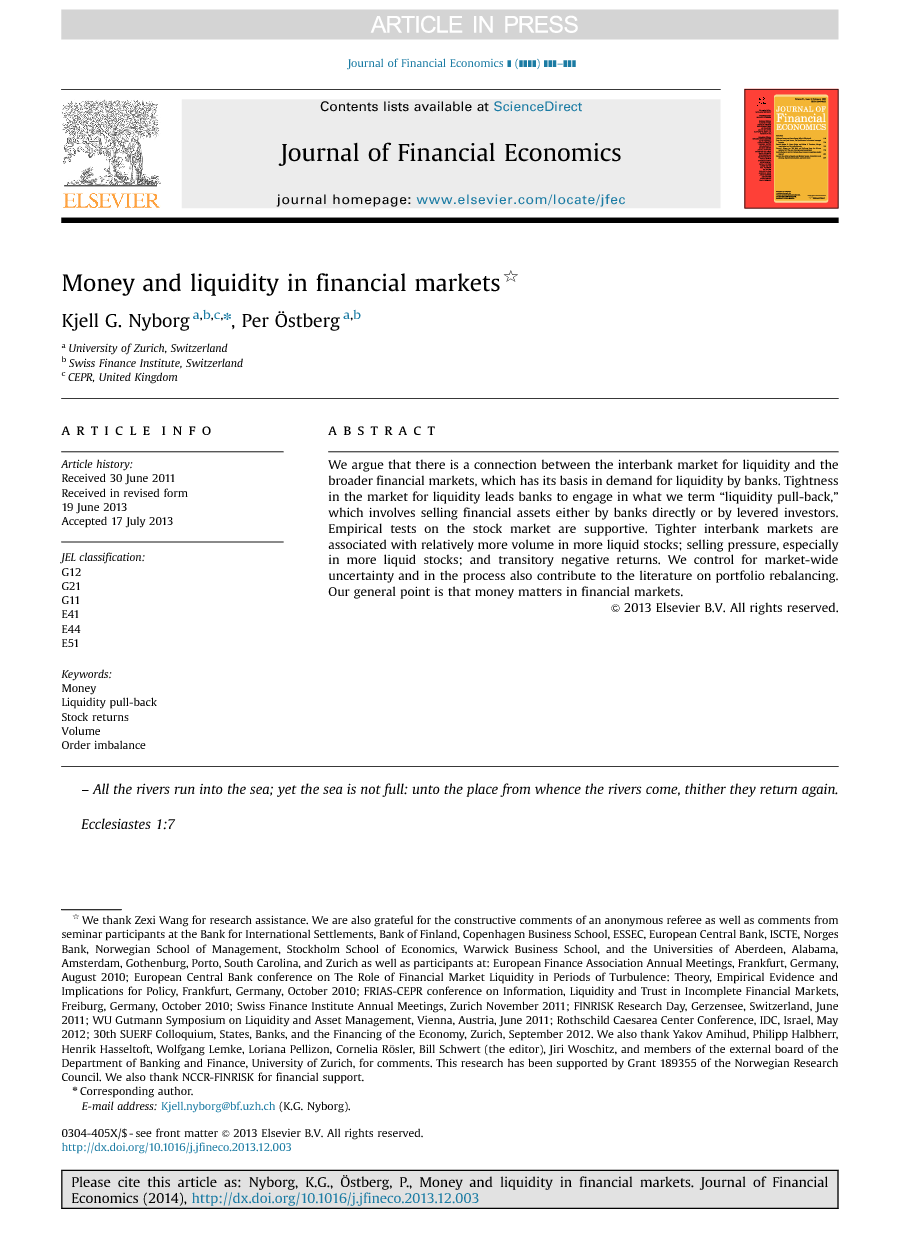 We argue that there is a connection between the interbank market for liquidity and the broader financial markets, which has its basis in demand for liquidity by banks. Tightness in the market for liquidity leads banks to engage in what we term “liquidity pull-back,” which involves selling financial assets either by banks directly or by levered investors. Empirical tests on the stock market are supportive. Tighter interbank markets are associated with relatively more volume in more liquid stocks; selling pressure, especially in more liquid stocks; and transitory negative returns. We control for market-wide uncertainty and in the process also contribute to the literature on portfolio rebalancing. Our general point is that money matters in financial markets.

We have argued that there is a connection between the interbank market for liquidity and the broader financial markets, which has its basis in demand for liquidity by banks. Tightness in the interbank market for liquidity leads banks to engage in what we term liquidity pull-back, which involves selling financial assets either by banks directly or by levered investors. This does not increase the stock of money in aggregate, but can increase the money balances of an individual bank. This line of reasoning has implications that relate to volume, returns, and order imbalance, and the body of the paper is devoted to testing these. The implications are verified in the data. First, consistent with the liquidity pull-back hypothesis, we find that the market share of volume of relatively more liquid stocks is increasing in the price of liquidity, as measured by the Libor-OIS spread. In some of our analysis, we have also run parallel tests using the TED spread, without this changing the qualitative findings. Interestingly, we find strong evidence for liquidity pull-back over the pre-crisis period, but only weak evidence over the post-TAF period. We think this makes sense in light of the loose monetary policy post-TAF. For the pre-crisis period, the results are especially strong for the four decile portfolios consisting of the 40% most liquid stocks, representing approximately 97% of daily volume on average. By using the VIX as a control variable, we have also examined the alternative hypothesis that it is portfolio rebalancing in response to changes in volatility that drives the relation we have uncovered between the price of liquidity in the interbank market and the market share of volume of stocks of different liquidity levels. Our evidence suggests that both such portfolio rebalancing and liquidity pull-back are going on. Unlike liquidity pull-back, however, the evidence for portfolio rebalancing is also strong post-TAF. Second, consistent with the liquidity pull-back hypothesis, we also find that increases in the Libor-OIS spread are associated with selling pressure in the market as a whole and especially for more liquid stocks. Third, increases in the Libor-OIS spread have a transitory negative impact on returns. Fourth, the magnitudes of the return effect are similar for the portfolios consisting of the 60% most liquid stocks, representing approximately 99% of daily volume on average. Increases in the VIX are also associated with selling pressure and negative returns. The effect is differentiated from that of the Libor-OIS spread, however, by the impact of the VIX being instantaneous. Overall, our findings on volume, order imbalance, and returns provide strong supportive evidence for the liquidity pull-back hypothesis. The results are especially strong for the 40% most liquid stocks. The results are weaker for the 40% least liquid stocks. These stocks, which constitute less than 0.6% of total volume on a given day, may simply be too small and illiquid to be a significant systematic part of liquidity pull-back trading. Amihud and Mendelson (1986) and Longstaff (2009) show that portfolios may be optimally tilted away from illiquid financial assets by agents that have more immediate liquidity needs. The perspective we advance in this paper is that an important function of financial markets is to act as a liquidity storage facility that players can dip into when they need liquidity (in the monetary sense). In many ways, this is not new. It is present or implicit in models of intertemporal saving. It is also explicit in the idea of “liquidity traders” in the literatures on noisy rational expectations equilibria and market microstructure. In simplistic terms, our point is that banks can act as liquidity traders as well, or force liquidity trading by levered investors through increasing margins or haircuts. A bank may engage in this when it needs high-powered money but the price it faces in the interbank market is too high or its interbank credit limits are exhausted. Selling a financial asset can be thought of as an act of converting low-powered money (financial assets) into high-powered money (liquidity). When the price of liquidity goes up, the price of conversion also rises and asset prices therefore fall. Thus, asset prices fluctuate with the price of liquidity, which is consistent with our findings. On a more macro level, the implication is that if there is not sufficient liquidity in the system to satisfy banks' demand in aggregate, asset prices fall as banks start to engage in liquidity pull-back. In such a state, if additional liquidity is injected by the central bank, the value of higher-powered money should fall and this would show up as an increase in the prices of financial assets. The fall in asset prices during the crisis and their subsequent rise following the Fed's first quantitative easing program in March 2009 could be viewed as an example of this phenomenon. The framework for thinking about money and liquidity in financial markets that we have outlined in this paper may be relevant for a number of other liquidity phenomena. As an example, consider the phenomenon of increased correlations during crisis times (King and Wadhwani, 1990) and “flight to quality” (Sundaresan, 2009, p. 343). While much of these effects may be due to increased uncertainty, there may also be a liquidity pull-back effect present. The liquidity pull-back interpretation of the phenomenon of increased correlations in crisis is that these are times when liquidity is extremely dear or difficult to get in the interbank market. Banks therefore engage in liquidity pull-back. Put differently, there is a (financial market) credit contraction. The conjecture is that the worse conditions are in the interbank market, the larger are asset cross-correlations and the stronger will flight to quality appear to be.