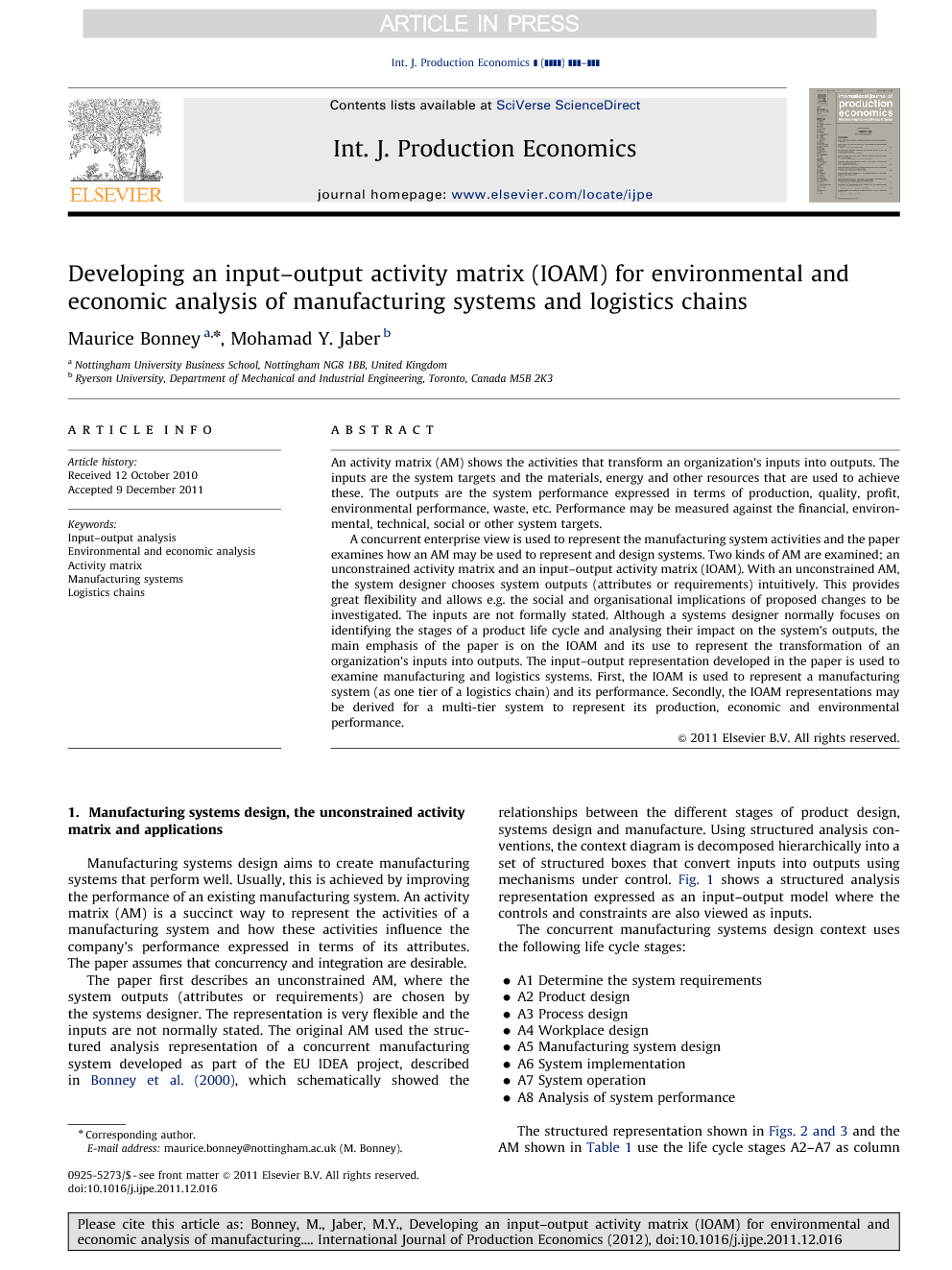 An activity matrix (AM) shows the activities that transform an organization’s inputs into outputs. The inputs are the system targets and the materials, energy and other resources that are used to achieve these. The outputs are the system performance expressed in terms of production, quality, profit, environmental performance, waste, etc. Performance may be measured against the financial, environmental, technical, social or other system targets. A concurrent enterprise view is used to represent the manufacturing system activities and the paper examines how an AM may be used to represent and design systems. Two kinds of AM are examined; an unconstrained activity matrix and an input–output activity matrix (IOAM). With an unconstrained AM, the system designer chooses system outputs (attributes or requirements) intuitively. This provides great flexibility and allows e.g. the social and organisational implications of proposed changes to be investigated. The inputs are not formally stated. Although a systems designer normally focuses on identifying the stages of a product life cycle and analysing their impact on the system's outputs, the main emphasis of the paper is on the IOAM and its use to represent the transformation of an organization’s inputs into outputs. The input–output representation developed in the paper is used to examine manufacturing and logistics systems. First, the IOAM is used to represent a manufacturing system (as one tier of a logistics chain) and its performance. Secondly, the IOAM representations may be derived for a multi-tier system to represent its production, economic and environmental performance.

The paper has discussed input–output analysis and used it to develop an Activity Matrix representation that can be used to model all tiers of a logistics chain. The operational activities of a tier act on the tier's inputs to produce the tier's outputs, which are measured using the chosen metrics. The previous tier in the logistics chain generally provides the material, parts and assemblies, to the manufacturing tier. However, there could be additional local inputs of material, energy and resources such as labour and machinery. The AM of Table 1 and the outline IOAM of Table 2 were developed from Fig. 2, Fig. 3 and Fig. 4. The Activity Matrix shown in Table 1 illustrates, in principle, how each tier of a logistics chain may be analysed to improve its operational economic and environmental performance. The illustrative IOAM shown in Table 2 is the basis for analysis and relates to production, economic and environmental planning and shows a tentative set of inputs, outputs and constraints. Parts of Table 2 are quantitative and precise and in a form that could be manipulated by input–output analysis (Leontief, 1986). Other parts may contain activities that influence attributes in a way for which knowledge is qualitative and imprecise (Holub and Schnabl, 1985). Consider first the inputs and outputs and a systems analysis so as to focus on the main functional activities. Secondly, increase the breadth of the system study by selecting further system attributes intuitively so as to focus attention on the activity matrix attributes that lie outside a formal input–output analysis. An analysis may suggest that it is organisationally sensible to take actions to improve the economic or environmental performance of certain tiers of the logistics chain. If so, then potentially this would give those tiers economic and environmental advantages over other tiers. Yet to achieve these advantages is likely to require the co-operation of other tiers. In such co-operative situations, the various tiers may choose to share the advantages financially or in other equitable ways. An analogous situation that involves choosing batch sizes and pricing over a logistics chain so as to take advantage of and share the economic advantages of learning is illustrated in Jaber et al. (2010). When considering a complete logistics chain and particularly with environmentally based decisions, the trade offs are wider and should relate to all players that have an interest in the decisions. Specifically, Bonney (2009) suggested a five-level set of players that have such an interest to be: supra-national organisations, national organisations, local government, companies and individuals. If as a result of an analysis it is found that changes would have environmental advantages particularly for problems related to multinational logistics chains, then some of the players, particularly supra-national bodies and national agencies could deliberately shift the economic balance of the environmental decisions by the appropriate use of incentives and disincentives such as legislation, tax levies or tax incentives. Local regulations could encourage employment in high unemployment areas. More positively, competing companies or individuals may choose cooperative actions in order to contribute to solving our increasingly serious environmental and resource shortage problems. Many workers have used input–output analysis in the Leontief (1986) sense for applications that include economic and environmental analysis. This suggests that, if the Activity Matrix concept that has been discussed proves acceptable for the design of manufacturing systems and logistics chains, then many cross-links between economic and environmental analyses are likely to develop. The theoretical and practical problems of creating appropriate performance measures are important and much further work on this is needed; in particular, selecting measures to help choose activities that balance economic and environmental consequences appropriately and with confidence. Many potential changes related to product and process design, facility location and organisational choices affect the resources that are used, the travel that is needed and the time that it takes to achieve the plans. All of these activities have financial and environmental implications and therefore need to be chosen carefully. Finally, when considering individual life cycle stages it is important to recognise that the total system performance is more important than the performance of individual stages. Specifically, using a set of optimised sub-systems does not necessarily achieve system optimisation. Fig. 2, Fig. 3 and Fig. 4, indicate that to move towards optimisation, as far as possible within the difficulties that different tiers may not be part of the same organisation, all tiers in the logistics chain should be considered concurrently as part of the same ‘total system’. The authors hope that the general input–output representation of a logistics system as discussed in this paper will encourage analysts to develop further Leontief type input–output models for a broad range of environmental and economic problems related to logistics.