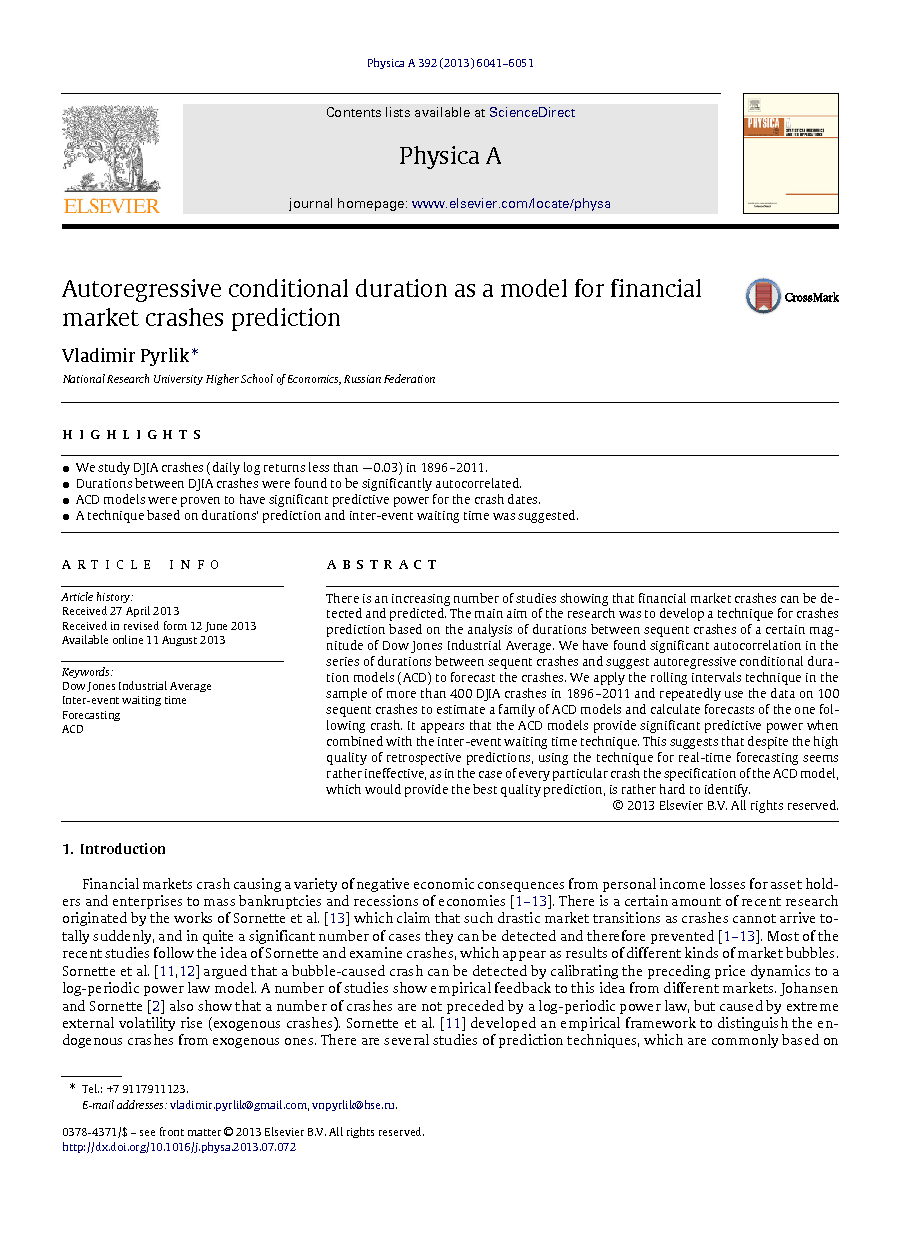 There is an increasing number of studies showing that financial market crashes can be detected and predicted. The main aim of the research was to develop a technique for crashes prediction based on the analysis of durations between sequent crashes of a certain magnitude of Dow Jones Industrial Average. We have found significant autocorrelation in the series of durations between sequent crashes and suggest autoregressive conditional duration models (ACD) to forecast the crashes. We apply the rolling intervals technique in the sample of more than 400 DJIA crashes in 1896–2011 and repeatedly use the data on 100 sequent crashes to estimate a family of ACD models and calculate forecasts of the one following crash. It appears that the ACD models provide significant predictive power when combined with the inter-event waiting time technique. This suggests that despite the high quality of retrospective predictions, using the technique for real-time forecasting seems rather ineffective, as in the case of every particular crash the specification of the ACD model, which would provide the best quality prediction, is rather hard to identify.

Financial markets crash causing a variety of negative economic consequences from personal income losses for asset holders and enterprises to mass bankruptcies and recessions of economies [1], [2], [3], [4], [5], [6], [7], [8], [9], [10], [11], [12] and [13]. There is a certain amount of recent research originated by the works of Sornette et al. [13] which claim that such drastic market transitions as crashes cannot arrive totally suddenly, and in quite a significant number of cases they can be detected and therefore prevented [1], [2], [3], [4], [5], [6], [7], [8], [9], [10], [11], [12] and [13]. Most of the recent studies follow the idea of Sornette and examine crashes, which appear as results of different kinds of market bubbles. Sornette et al. [11] and [12] argued that a bubble-caused crash can be detected by calibrating the preceding price dynamics to a log-periodic power law model. A number of studies show empirical feedback to this idea from different markets. Johansen and Sornette [2] also show that a number of crashes are not preceded by a log-periodic power law, but caused by extreme external volatility rise (exogenous crashes). Sornette et al. [11] developed an empirical framework to distinguish the endogenous crashes from exogenous ones. There are several studies of prediction techniques, which are commonly based on similarities of financial markets with other kinds of complex systems experiencing critical events and transitions [14], [1], [3], [4], [8], [9], [10] and [13]. An increasing number of studies focus on differently scaled data on a variety of assets and markets looking for empirical evidence of power law distributions in transitions of market activity indices including assets’ prices, returns, volume and number of trades, realized and conditional volatility, intratrade duration [1], [2], [3], [4], [5], [6], [7], [9], [10], [11], [12] and [13]. Studying the patterns of price formation and stylized features of trend switching at the markets Preis and Stanley [5], [6] and [7] confirmed that mechanisms of financial bubbles’ formation and following market crashes due to the bubbles’ collapses have no scale, and both major and microscopic trend switching share similar properties. Rivera-Castro et al. [8] introduced a technique to characterize the distribution of top–bottom prices’ returns and time intervals, which was proved rather accurate in fitting the trend switches of DJIA throughout 1928–2011. This paper is motivated by the finding of significant autocorrelation in a series of durations between sequent significant and fast falls of the stock market (i.e. market crashes) measured by strong negative daily log returns of DJIA in 1896–2011. We aim to contribute to the research on the topic by showing the significant predictive power of autoregressive conditional duration models previously used to analyze ultrahigh frequent intra-day financial time series [15], [16], [17], [18], [19], [20], [21] and [22]. The paper is organized as follows. In the next section we analyze the daily dynamics of DJIA in 1896–2011, define a market crash as an arrival of daily log return of the index less than −0.03 and show that there were about 400 such events during the 115 years, and that the durations between such sequent events form an autocorrelated series. This autocorrelation is the motivation to use autoregressive conditional duration models for prediction; Section 3 is a review of this methodology. Section 4 presents the empirical results and discussion: we use the rolling intervals to retrospectively analyze a series of 300 crashes of DJIA taking place in 1924–2011 and derive a series of rather qualitative predictions for each of the crash’s arrival date, analyze the forecast errors, and study a few examples of practical prediction techniques combining inter-event waiting time and autoregressive conditional durations’ forecasts and comparing the total amount of correctly predicted crashes to the relative length of the periods of market activity for a supposable market participant using the prediction technique.

The presented results show that autoregressive conditional duration models deliver significant predictive power in forecasting dates of sequent market crashes under autocorrelated durations between them. However as several of the tested ACD specifications regularly deliver the best quality predictions and rarely a single specification delivers the best prediction twice in a row, designing a prediction technique based on these predictions needs further research. In terms of the inter-event waiting time and the amount of predicted crashes the ACD-based predictions outperform entirely random prediction, and manage to outperform a technique based on simple fixed inter-event waiting time for relatively low length of waiting time periods.