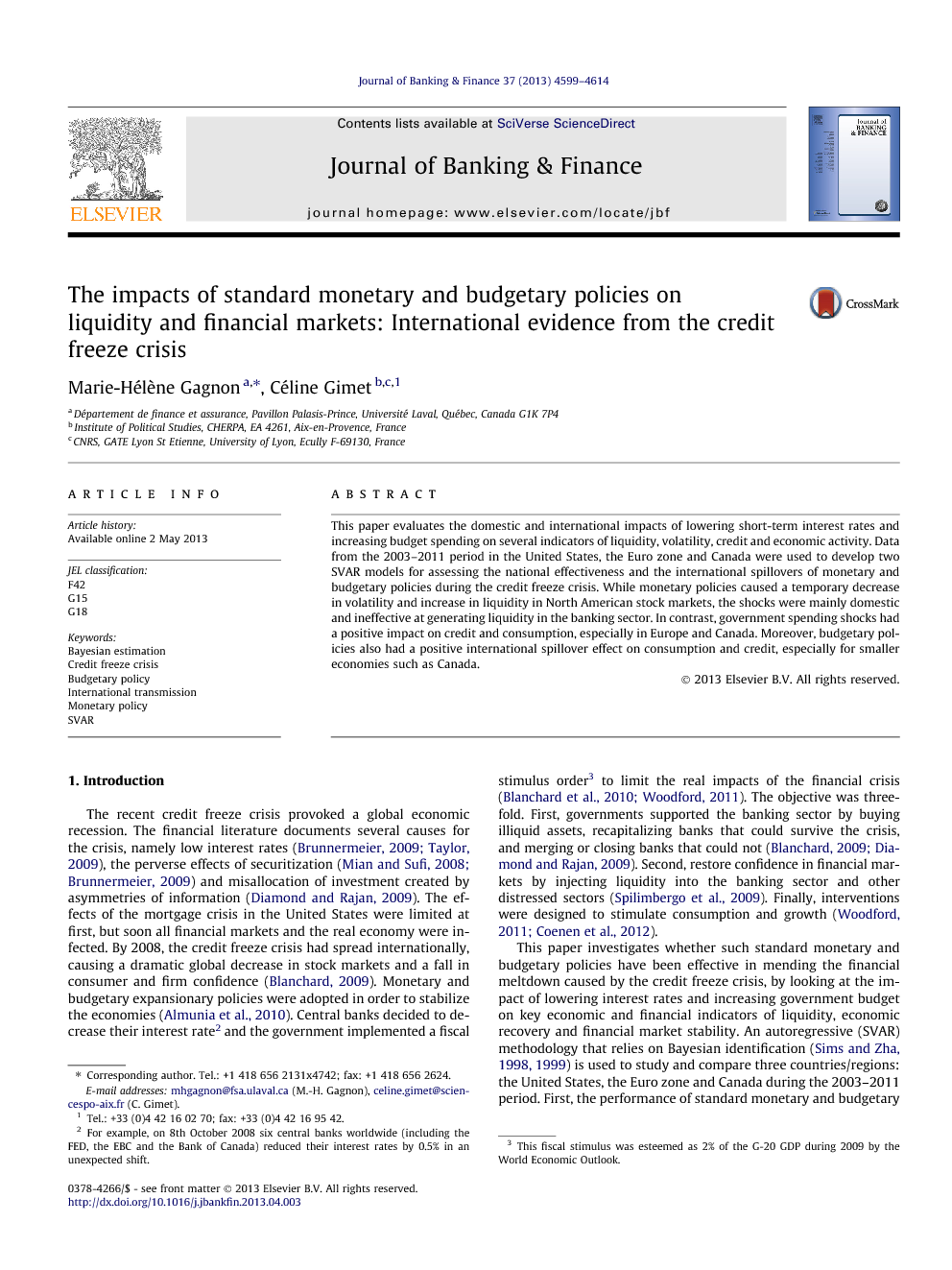 This paper evaluates the domestic and international impacts of lowering short-term interest rates and increasing budget spending on several indicators of liquidity, volatility, credit and economic activity. Data from the 2003–2011 period in the United States, the Euro zone and Canada were used to develop two SVAR models for assessing the national effectiveness and the international spillovers of monetary and budgetary policies during the credit freeze crisis. While monetary policies caused a temporary decrease in volatility and increase in liquidity in North American stock markets, the shocks were mainly domestic and ineffective at generating liquidity in the banking sector. In contrast, government spending shocks had a positive impact on credit and consumption, especially in Europe and Canada. Moreover, budgetary policies also had a positive international spillover effect on consumption and credit, especially for smaller economies such as Canada.

The recent credit freeze crisis provoked a global economic recession. The financial literature documents several causes for the crisis, namely low interest rates (Brunnermeier, 2009 and Taylor, 2009), the perverse effects of securitization (Mian and Sufi, 2008 and Brunnermeier, 2009) and misallocation of investment created by asymmetries of information (Diamond and Rajan, 2009). The effects of the mortgage crisis in the United States were limited at first, but soon all financial markets and the real economy were infected. By 2008, the credit freeze crisis had spread internationally, causing a dramatic global decrease in stock markets and a fall in consumer and firm confidence (Blanchard, 2009). Monetary and budgetary expansionary policies were adopted in order to stabilize the economies (Almunia et al., 2010). Central banks decided to decrease their interest rate2 and the government implemented a fiscal stimulus order3 to limit the real impacts of the financial crisis (Blanchard et al., 2010 and Woodford, 2011). The objective was threefold. First, governments supported the banking sector by buying illiquid assets, recapitalizing banks that could survive the crisis, and merging or closing banks that could not (Blanchard, 2009 and Diamond and Rajan, 2009). Second, restore confidence in financial markets by injecting liquidity into the banking sector and other distressed sectors (Spilimbergo et al., 2009). Finally, interventions were designed to stimulate consumption and growth (Woodford, 2011 and Coenen et al., 2012). This paper investigates whether such standard monetary and budgetary policies have been effective in mending the financial meltdown caused by the credit freeze crisis, by looking at the impact of lowering interest rates and increasing government budget on key economic and financial indicators of liquidity, economic recovery and financial market stability. An autoregressive (SVAR) methodology that relies on Bayesian identification (Sims and Zha, 1998 and Sims and Zha, 1999) is used to study and compare three countries/regions: the United States, the Euro zone and Canada during the 2003–2011 period. First, the performance of standard monetary and budgetary domestic policies is evaluated. Second, the cross-country spillover effects of these economic policies in each of the three countries on the others’ economies of the sample are identified. This paper makes two main contributions to the financial literature. First, the existing economic literature on SVAR models and on the impact of monetary and budgetary policies focuses mainly on macroeconomic variables. However, it is important to consider the efficiency of these policies to restore the “credit channel,” especially in the first stage of the crisis - the illiquidity period (Blanchard et al., 2010). Consequently, this paper extends the existing empirical literature using the Structural Vector Autoregression model (SVAR) approach by considering the impact of standard economic policies on financial variables. We introduce measures of the banking sectors’ liquidity as well as liquidity and volatility indicators for the financial markets. Banking and financial variables are still rarely incorporated into analyses, though doing so could help in evaluating a government’s ability to stabilize the financial sector as well as the real economy. Our objective is to bridge this gap by introducing well-known financial indicators from the financial and asset pricing literature. This paper pays particular attention to international channels of transmission of liquidity in the banking sector and their modeling implications. Second, the impact of monetary and budgetary policies is not restricted to the domestic market. This paper examines whether a “remedy” consisting of standard monetary and budgetary policies can have an effect beyond its domestic market and “immunize” others as well. Another possible dynamic is a zero-sum game, where liquidity injected into one market prevents similar injections into other markets due to a worldwide shortage of funds. Thus, another aim of this paper is to assess whether a country’s foreign policies have a positive, negative or neutral impact on the recovery of other countries, not only on their macroeconomic situation (Auerbach and Gorodnichenko, 2012a and Auerbach and Gorodnichenko, 2012b). Our main results are as follows. First, lowering short-term interest rates proved ineffective in creating liquidity in the banking sector in all countries/regions considered. However, despite the low short-term interest rates during the study period, stock market volatility decreased and stock market liquidity increased when interest rates were lowered in North American stock markets. No such positive effect of monetary policy was found in Europe. Second, increasing government spending can have a positive effect on credit and consumption. While private consumption increased after budgetary shock in all countries/regions considered, the ratio of credit to GDP increased in Europe and Canada, but not in the United States. Finally, budgetary policies appear to have especially significant positive international spillovers in smaller countries such as Canada.

This paper asks whether traditional interventions such as lowering short-term interest rates and increasing government spending can be effective tools for recovery from the credit freeze. The results of our investigations using SVAR methodology show that monetary policies are ineffective in creating liquidity in the banking sector, but that budgetary policies can increase the ratio of available credit to GDP. Monetary policies had a positive impact on stock markets in North America. Budgetary policies had positive impacts on the European and Canadian lending sectors, but not on the US one. Whereas monetary policies were found to have mostly domestic effects on financial markets, US and European budgetary policies had international spillover effects. In recent decades, much attention in academic literature has been devoted to financial market integration and its repercussions in domestic economies. The positive contagion of budgetary stimuli documented in this paper perhaps suggests the importance of developing political integration along with financial integration, as financial problems have become global issues.